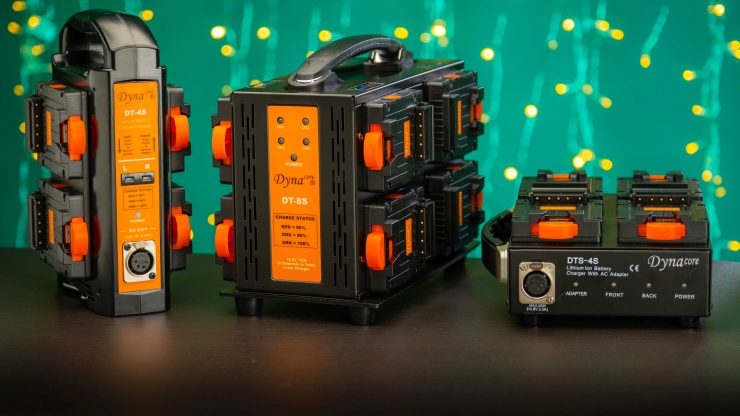 The Mini V-Lock 98 watt-hour battery has become a trendy size this year, and I like them a lot. They are very versatile and lightweight, which makes them a good option for smaller setups like powering a monitor or small lights or camera rigs for powering the camera and other devices. I reviewed the Dynacore 98 wh model recently, so check it out.

Since the Mini V-Locks are small and charge much faster, having a charger that can take advantage of the form factor makes a lot of sense. The new Dynacore Mini V-Lock chargers are pretty much the same size as the conventional model only doubles the available bays. For example, a 2-sided V-Lock charger can only fit one on each side, but with a smaller mini plate, they can fit two Mini’s on each.

Some chargers have higher amps around 5. The advantage of that is they charge faster. The catch is knowing if the multiple charge bays use the full 5 amps when charging more than one battery. Most will drop to half the amps for simultaneous charging.

When shopping for chargers, the more juice it pumps, the better. This is especially true when charging larger capacity 190 wh and higher models. They can take several hours to charge fully.

The new Dynacore DT-4S, DTS-4S, and DT-8S chargers simultaneously charge at 1.5 amps per channel. While that is a touch slower than the more common, 2A the Mini 98 wh, V-Locks charge up pretty quick due to the capacity being lower. The advantage here is they will charge all up at the same time. It takes proximity 2.5 hours to charge a 98 wh battery. When mixing partially depleted batteries with fully depleted, the charger will take the least charged battery to the same voltage as the others then charge them all together.

With so many bays, the charging scheme changes depending on how many batteries are being charged. If only one 98wh battery is charging, it takes approximately 2.5 hours to complete as it uses 3 amps instead of 1.5 amps.
If two 98wh batteries are on one side or channel, the charge time is around 4.5 hours due to the drop to 1.5 amps.

With the DT-4S, DTS-4S, and DT-8S, the status light will turn red while charging and turn green when the two batteries are finished.  Again, if you have a battery that is half charged with a fully depleted battery on the same channel, it will charge the lowest voltage battery first. When the two batteries voltage is the same, they will be charged together until completed.

DT-4S Dynacore Mini V-Lock charger has a familiar form factor. Like I mentioned, the added real-estate allows for two V-Lock bays on each side. The batteries charge simultaneously at 1.5 amps. If you only charge one battery, it goes to 3 amps.
Charger and adapter functions can be used at the same time. A 4-pin power cable is included.

On the front is the DC Out and charging indicators for both the left and right sides. The charging status on the charger states the following. RED Under 80%, Orange over 80%, and Green 100% charged. However, I found it only goes from Red to Green with no Orange 80% statues.

The fan on the DT-4S is on top and is audible and not recommended to be close to live audio capture. The overall build is excellent. The housing is all plastic but feels solid and keeps it light. This one is a good choice for traveling as it’s the lightest of the three at 1.30Kg or 2.86 pounds.

I like this form factor a lot. It’s small with a low profile that gives it great stability on a desk or table unlike the taller DT-4S that could be knocked over due to its verticle design. The body is made of all-metal.
On the front is the DC out that can be used while charging.

The charging lights on the front don’t show when the battery reaches 80% charged like both the DT-88 and DT-4S. It stays red throughout the cycle and turns green when at 100%. The fan shuts off once the batteries are fully charged.

I did find the charger to be louder than I like. The fan has a higher pitch, so it stands out more. It doesn’t run when the charger is off, or the cycle is complete. The fan noise is somewhat of a deal-breaker for me on this model. That’s unfortunate because I like the design.

This is the “Big Daddy” model. With a total of eight charging bays, the DT-8S in one clean sweep can charge eight mini V-Locks at once. 800-watt hour of power in 4.5 hours. Boom!

The housing is all metal with sturdy feet. The top handle also has a solid secure feel, as does the DTS-4S. It’s not heavy, but at almost 5.5 pounds it’s also not light.

One thing that is missing with the DT-8S is no 4-pin power output like the other two models. To keep it cool the DT-8S has a larger fan than the other two, and it’s relatively quiet. I would be able to have it charging without the noise being uncomfortable, but I wouldn’t want it near a live microphone.

Like the DTS-4S, it uses the same status system. When the charger shows RED, the battery is charging and GREEN when fully charged.

The Dynacore Mini V-Lock chargers, while designed for Mini V-Locks, will charge any V-Lock battery size just as long as it fits. I found it to work with all the models I have. The only downside is you can’t use all the bays as the larger battery will take up more space. The design of the mini plates makes this possible, as they are very compact and slim. With all the models when using a full-size V-Lock, you get half the capacity of bays.

Something to keep in mind. The Dynacore Mini V-Lock charges a single battery at 3 amps and two simultaneously at 1.5A, while the Quad Dynacore D-4S charges at 2.5 amps, making it a slightly better option for faster charging of multiple higher capacity larger V-Lock batteries.
When using the Mini V-Lock chargers, it takes approximately 3.5 hours to charge a single 155wh 14.8v battery at 3 amps.

At InterBee 2019 Matt found a few Mini Chargers and I’m sure more are coming to market soon as the Mini V-Lock design is taking off.

We are so dependent on batteries more than ever, and I love the smaller 98-watt hour variety. Smaller is better if you have devices that need juice, and larger V-Locks would make it hard to hold or carry. The design of the Dynacore Mini V-Lock chargers is smart. Taking advantage and doubling up the charging bays. Nobody likes to wait, so being able to pack it with batteries and have them simultaneously charge is superb. I feel I need to buy more minis! Being able also to charge the non-mini V-Locks is also a plus.

The DTS-4S charger is loud due to the fan noise. It’s a higher pitch that makes it more noticeable. The other two models are not as loud and have a deeper tone to them. This won’t be good around live audio on set. I also certainly wouldn’t want to be sitting next to it on a desk or shelf. The portable DT-8S model is much quieter while the big boy DT-4S 8-bay has a larger fan and is acceptable. The fan is constant on all chargers while charging batteries.

My choice, if I were to travel with gear, would be the lightest and least expensive DTS-4S. For studio or office, the 8-bay gets it done. I do like the form factor of the 4-bay DTS-4S, but the fan is just too loud for me, making it a deal-breaker.

It’s good to have options, and the new Dynacore Mini V-Lock chargers delivery a good product at a reasonable price.