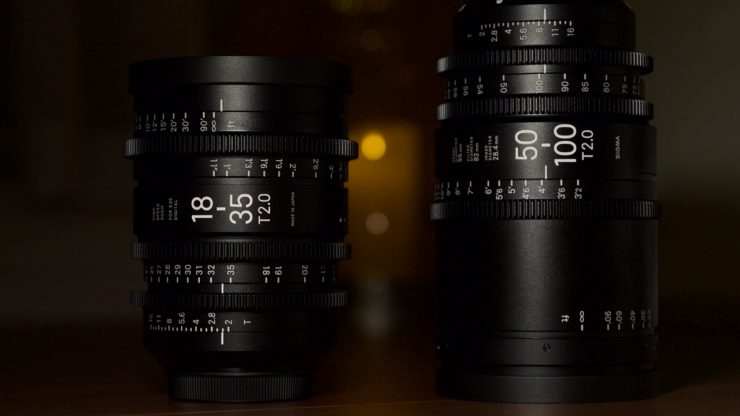 This year we have seen an unprecedented number of more affordable cine lenses announcement. Some of these have been from more established players in the market such as Zeiss and Angenieux, but we’ve also witnessed several new competitors trying to get a slice of the cine lens market. One of those is Sigma, who up until recently were focused on still photography lenses. This all changed when they announced a comprehensive range of zoom and prime lenses specifically for video shooters. 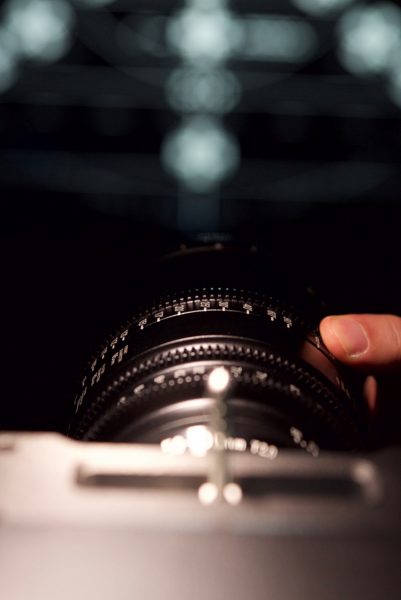 Sigma’s still photography lenses, especially the 18-35mm f1.8 and other Art series lenses, have become a favourite of many shooters due to their relatively low cost and high performance. Still photography lenses can be easily adapted to work in a video environment, but they do have their limitations. 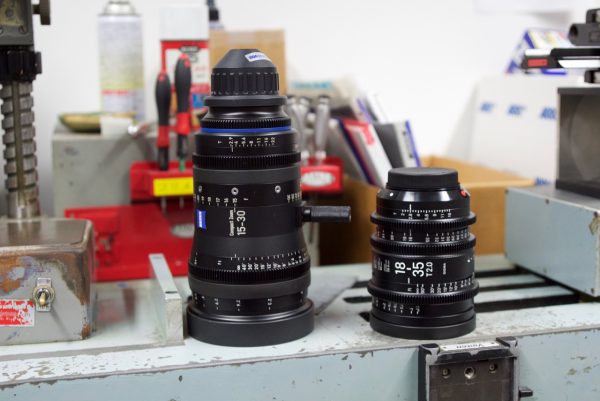 So why haven’t there been more affordable cine lens options up to now? Making a dedicated cine lens, even if it is based on an existing stills lens design, is a lot more difficult that people may imagine. Cine lenses need to meet a certain standard to be widely accepted and carried by rental houses. With still photography lenses it is quite common to come across two samples of the same lens, with the same designation, that have different characteristics due to differences in tolerances, or subtle differences in design. Despite the high level of quality control that most manufacturers have, you could still take two  zooms of the same model and find that one of them appears to be a lot closer to being parfocal than the other.

Cine lens users and rental houses expect a higher level of consistency when choosing their lenses. While individual cine lenses may still not be completely identical, their tolerances and build quality need to be a much better matched. 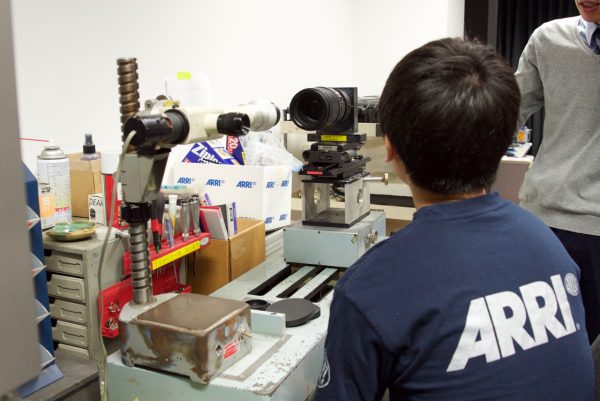 I took Sigma’s new 18-35mm T2 and 50-100mm T2 to NAC Image Technology here in Japan to perform a technical evaluation of the lenses. As a DP who primarily uses cine lenses it is important for me to know exactly how a lens works and what its technical limitations are. By putting the lenses on specialist machines and getting them evaluated by trained and certified lens technicians, I can get an independent assessment of their performance. 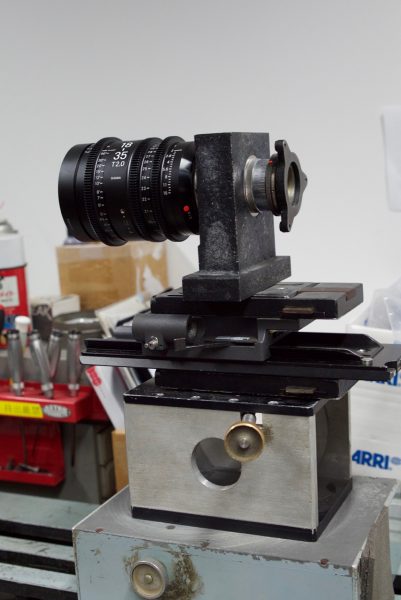 There has recently been some quite heated debates over whether the Sigma 18-35mm is actually parfocal. For those who may not know, a parfocal lens has the ability to maintain accurate focus while zooming. Sigma made a statement saying that their 18-35mm T2 cine zoom was “near parfocal” and this has caused a lot of confusion. Several owners of the stills version of the 18-35mm have reported that their copies of the lenses are parfocal in behaviour. The picture was even further confused by Chinese lens conversion specialists G.L.Optics claiming their cine conversions of the 18-35mm stills version are parfocal. Cine zooms are made with a moving compensating group of elements that has the specific purpose of maintaining focus while the lens is zoomed. This group is adjustable to make certain it compensates correctly. Still photography zooms usually do not have these compensating groups. While the odd stills photography zoom may exhibit parfocal behaviour, the majority will never be truly be parfocal.

Sigma have told us that because the optics for the cine zooms were originally designed for stills cameras, they were never designed to be completely parfocal. For them to be 100% parfocal would require a new optical design. No amount of subsequent tuning of the lens setup will magically make them 100% parfocal. Despite Sigmas claims I had both the 18-35mm T2 and 50-100mm T2 put on a collimator and independently evaluated to see if the lenses truly were parfocal. The lens technician examined both lenses thoroughly and concluded to me that in his professional opinion they were both parfocal. Sigma may well be using the statement “near parfocal” because scientifically it may not be 100% parfocal, but for all intents and purposes it is so close that even an experienced lens technician could not tell the difference – certainly on the copies that we evaluated. 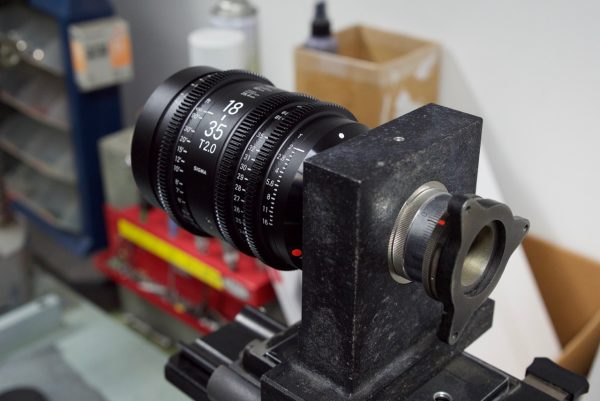 The lens technician was also quick to point out that testing parfocal behaviour on a collimator was one thing, but there are lots of other factors that can come into play. The camera or lens adapter you are using can also cause the image to not maintain focus even with a perfectly parfocal lens attached – something we previously saw in out tests with the stills versions. Lens adapters, particularly the cheaper ones, are often not made to extremely high tolerances. You really should be very careful when using adapters as they may end up altering your lenses behaviour. There is no substitute for testing. 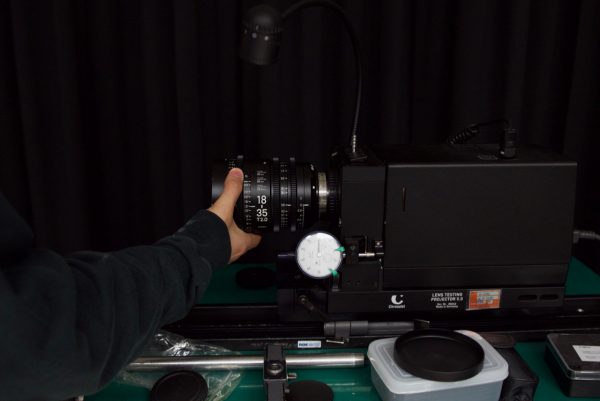 The second series of tests involved putting both lenses on a Chrosziel Lens Testing Projector. A lens testing projector functions like a slide projector, shining an even and bright light onto a reticle. The image is projected through the back of the lens onto a flat white wall. This allows testers to see how the lens handles geometric distortion of straight lines, whether there is chromatic aberration, internal barrel flare, sharpness, where the edges fall off (shading) and how the lens breathes.

We had a very close look at both of the Sigma zooms and concluded the following:
Sigma 18-35mm T2.0
*Very sharp in the center even wide open.
*Good corner sharpness even when set at T2. Improves when the lens is stopped down.
*Lens exhibits only very slight corner shading at the edge of its 28.4mm image diameter.
*Consistent contrast across the image.
*The lens does exhibit signs of distorting straight lines when at the wider end of the focal range. This improves when the lens is set at around 22mm and above.
*Chromatic aberration is very minimal and well contained.
*Lens flare is well controlled.
*Lens has very little focus breathing.

Sigma 50-100mm T2.0
*Very sharp in the center even wide open.
*Very good corner sharpness even when set at T2. Improves when the lens is stopped down.
*Lens exhibits only very slight corner shading at the edge of its 28.4mm image diameter, but it is more gradual than the 18-35mm.
*Fairly consistent contrast across the image. However the lens does darken slightly on the sides and edges when used wide open.
*The lens doesn’t exhibit any real noticeable signs of distorting straight lines when used at any focal length.
*Chromatic aberration is very minimal and well contained.
*Lens flare is well controlled.
*Lens has a large amount of focus breathing.
*Center of image does shift slightly when zooming, but probably not enough to warrant too much concern. 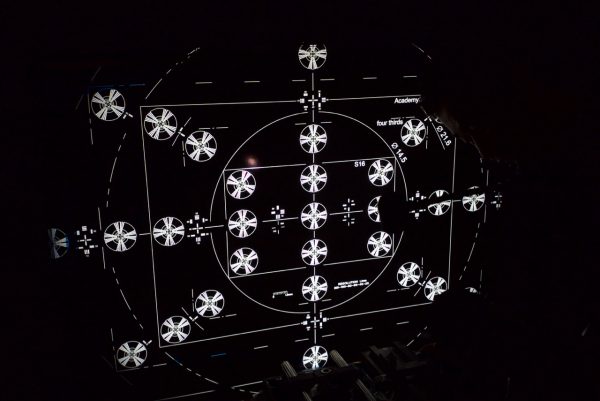 The lens testing projector showed that both Sigma lenses performed very well. As well as being sharp and showing a good level of contrast across the image, both lenses had very little, if any, chromatic aberration. Neither lens is perfect and the 18-35mm does show a certain level of straight line distortion up until around 22mm.

The 50-100mm while very sharp does suffer from a large amount of focus breathing for a cine lens. The technician told me that this breathing was amongst the worst that he had ever seen on a cine lens. 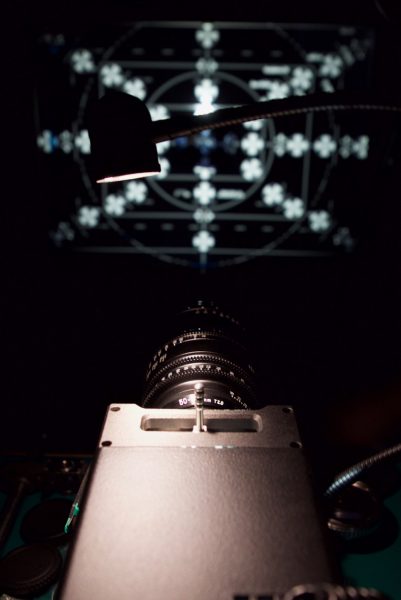 Breathing on the 50-100mm aside, the lens technician told me that he thought both lenses tested well, but that they also exhibited small anomalies that are not found in more expensive cinema lenses. In fairness these characteristics are not something that the average shooter is going to notice and it takes the trained eye of an expert to see. On a positive note he did tell me that he thought the lenses exhibited some of the same characteristics as Arri’s Alura zooms. 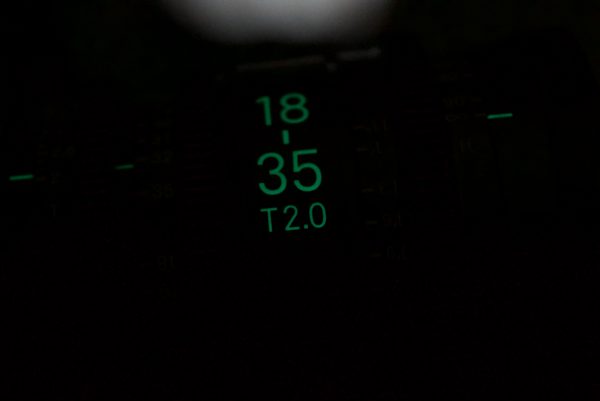 Both lenses are well made and the iris, zoom and focus all have a nice amount of resistance and smoothness to them. What I did like was that some of the information such as the lens details are iradescent and can be seen very easily in the dark. Unfortunately none of the actual focus, zoom, or iris markings glow in the dark which I found to be a strange admission. 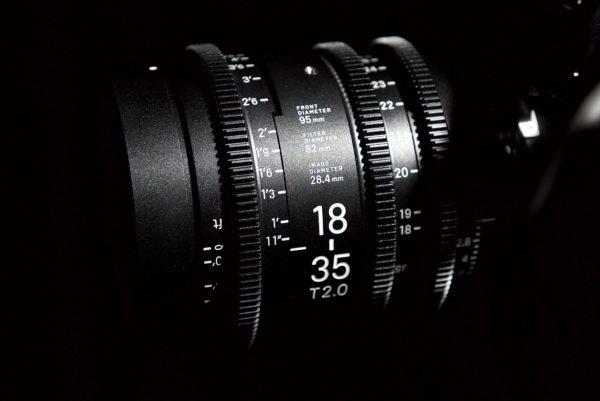 The other nice touch is that Sigma have actually listed the filter diameter, front diameter, and image diameter on the lens itself. This is very handy information to have available to you on the spot. Rental houses in particular are always receiving calls from customers wanting to know what these details are. 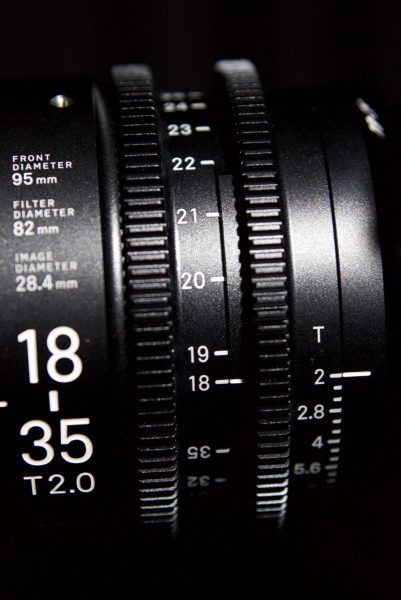 Something that did concern me though was that the iris and zoom lens gears are placed very close together and this would make mounting motors for a wireless FIZ system very difficult. 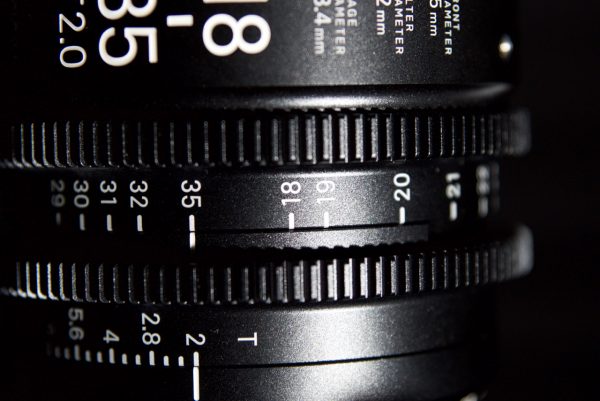 The other thing I didn’t like was that the zoom markings that are on both sides of the lens are very close together. It is very easy to get confused when you are looking in a hurry. This may be a minor complaint but it is something you don’t usually see on other cine lenses.

As the final part of my technical evaluation I put the zooms on an Arri Amira and shot some test charts. The results confirmed what I had seen on the lens projector in regards to image sharpness, contrast and edge fall off. 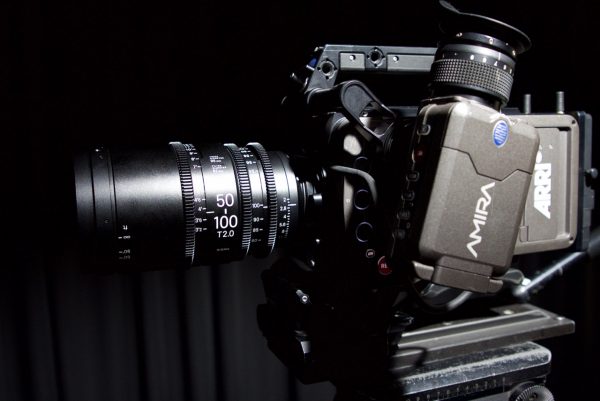 I also wanted to see how accurate the barrel marking were. Cinema lens markings need to be extremely accurate and I have seen some rehoused stills lenses where the markings have been way off. 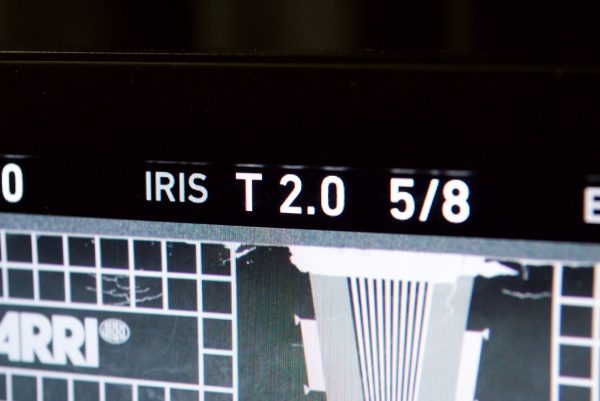 In addition, the Arri Canon EF lens mount is able to electronically communicate with the Sigma lenses to provide information such as T stop and focal length to the camera. I found that both the 18-35mm and 50-100mm showed the same focal length through the electronic connection as they did on the physical lens barrel. I did however find slight discrepancies when it came to the T-stop. What was being shown in the EVF through the electronic connection was slightly different to what was being set on the actual lens. According to the electronic communication between the camera and the lens, when set at T2 the lenses are actually reading T 1.4 6/8. After speaking to Sigma and Arri I subsequently found out that the Arri Canon EF mount is only communicating the F stop of the lens even though it is being displayed as a T-stop. This makes sense as T 1.4 6/8 is the equivalent of F1.8. 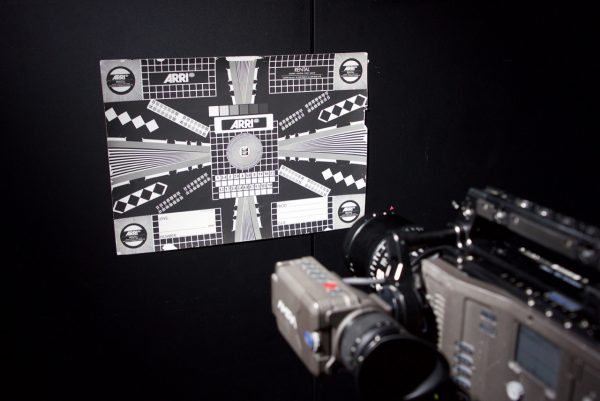 As far as the over all technical evaluation is concerned, both lenses performed very well considering they are essentially using stills optics. Sigma have done a good job with the 18-35 and 50-100mm T2.0. Even the NAC lens technicians, who spend their entire day working with some of the best glass money can buy, were reasonably impressed with what Sigma have done. 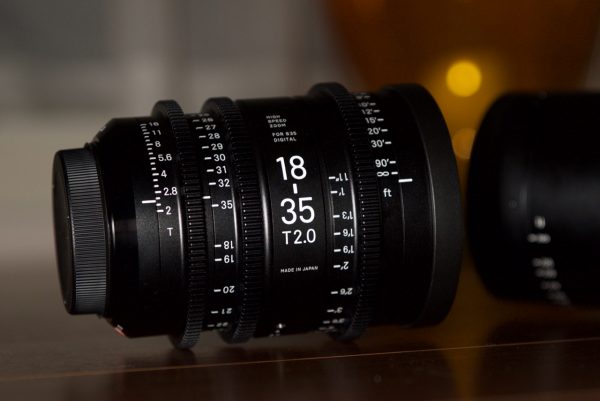 As a working DP, from a technical stand point I would have no problem using these lenses in a professional environment, especially the 18-35mm. The only real concern I had was with the massive amount of focus breathing on the 50-100mm. A lot of productions would find this unacceptable, but for individual shooters who work on their own it may not be a deal breaker.

Of course the technical side is only one aspect of why you might opt for one lens over another. There are plenty of more subjective judgements to be made about things the look and feel of the image. How is the bokeh? Does the subject pop out from the image? In Part 2 of my review I will be looking at how the lenses differ to their stills counterparts when it comes to image quality and operation.