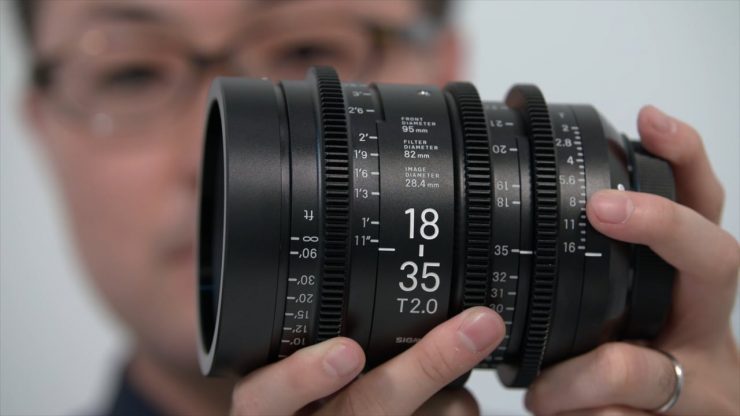 Sigma’s Super35 cine zoom lenses have created a lot of interest from both narrative and documentary camera people. The combination of fast apertures and a price of $3999.00 USD per lens is a tempting proposition for many. Even though we’ve seen prototype lenses and interviewed Sigma several times about them, we have still had a few unanswered questions until now.

One of the key questions concerns the statement by Sigma’s Shinji Yamaki that the lenses are “near parfocal”, rather than parfocal. A parfocal lens has the ability to maintain accurate focus while zooming. This is a trait that most cine zoom lenses exhibit, while stills zooms generally don’t (although some are clearly nearer to being parfocal than others and there are hot debates about whether this lens or that is actually parfocal).

Sigma have previously told us that the new lenses are of the same optical design as their stills counterparts. This immediately caused confusion because several owners of the stills version of the 18-35mm have reported that their copies of the lenses are parfocal in behaviour. The picture was even further confused by Chinese lens conversion specialists G.L.Optics claiming their cine conversions of the 18-35mm stills version are parfocal.

We’ve now had more clarification directly from Sigma about why they say the lenses are ‘near parfocal’. They told us that because the optics for the lenses were originally designed for stills cameras, they were never designed to be completely parfocal. For them to be 100% parfocal would require a new optical design. No amount of subsequent tuning of the lens setup will magically make them 100% parfocal.

From this we can deduce that none of the Sigma 18-35mm and 50-100mm lenses out there are technically parfocal. Sigma are saying that this is impossible by design. But it would seem that the base optics of the lenses are so close to parfocal, when set up optimally, that many users cannot tell the difference when using them in the real world.

This view is corroborated by what Duclos Lenses, LA-based resellers of the lenses, had to say to us on Twitter. As far as they are concerned, the phrase ‘near parfocal’ means “that it won’t be as perfect as a $100k Cine lens. [But] It’ll be vastly improved over a Canon [stills] lens.”

Basically, Sigma are being highly scientific in their definition of parfocal for this lens design. I suspect that increasing resolutions have a lot to do with their caution. Some older zoom lenses that were once considered parfocal in the old days of standard and high definition, have been demonstrated to not really be so when used for shooting 4K, 6K, 8K and beyond. It’s likely that Sigma won’t say their new zooms are parfocal in case someone proves that they are not when pixel peeping with some future 16K or 32K camera. 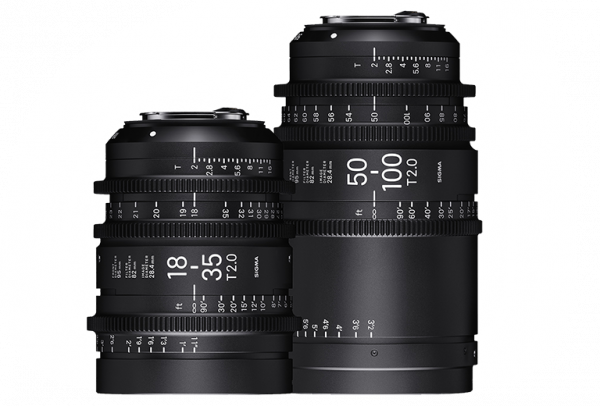 Sigma made the conscious decision to base the new cine lenses on the stills designs. Doing this allowed them to keep the lenses relatively affordable and compact in design. This is how they put it:

“It is a decision to produce cine lenses based on our stills lenses as we feel there is a market for small, affordable, but high quality lenses. Of course, if we want to produce very high end, yet expensive lenses in the future, our factory is more than capable of doing so.”

But that’s not the end of the story. Even if a lens is optically capable of being almost parfocal, there remains the issue of how well it is set up mechanically. For parfocal (or near parfocal) performance the distance from the lens to the sensor is critical. No matter what lens mount system you use there are tolerances involved. Sony E-mount, Canon EF mount, and even PL mount cameras and lenses all vary within a range set by the manufacturer (although this is not published). If a lens is at one end of the tolerance range, and the body at the other, then the mismatch between the two could result in a parfocal lens not behaving correctly. When you start to involve mount adapters, like the popular Canon EF to Sony E-mount ones, then there are even greater potential inaccuracies introduced.

With broadcast lenses, mount inaccuracies can all be easily rectified by setting the back focus using a locking ring toward the rear of the lens – something that every traditional TV cameraman is used to. The conventional way this is addressed with PL cine lenses is to use shims. These wafer thin spacers are inserted between the lens and mount, to allow the lens technician (or the adventurous camera operator) to fine tune the distances for optimal performance of the lens for zoom, infinity and distance scales. Some lenses like the Zeiss CP.2s make it relatively easy to shim because their mounts are already designed to be interchangeable and come supplied with shims as standard.

(It should also be noted that a few high end cine cameras also have internal flange back adjustments, or in extreme cases the camera’s mount can also be shimmed. Some lens adapters also accept shims, which is often a good option with non-shimmable lenses or cameras.)

In the ideal world all the cameras you use would be set to have the same flange depths, and all your lenses would be then individually set to work correctly with that depth. This is what most rental houses attempt to do with their PL lenses and cameras.

The second piece of important information that we have now obtained from Sigma is that the PL mount versions of the 18-35mm and 50-100mm will be shimmable by the user. This is great news for anyone worried about getting the lenses to perform as near to parfocal as possible with their specific camera.

We don’t know what tolerances will be used for lenses coming fresh from the Sigma factory, but it is very reassuring to know that if you don’t find the setup to your liking you can adjust it yourself.

The third bit of information we gleaned is that the EF and E-mount versions of the cine lenses will not be user-shimmable. This is presumably because they have electronic connections for lens data that could potentially be damaged if you take the mount to pieces to shim it. This means that if you get the native E-mount version and match it to a camera like the Sony FS7, then there will be little you can do to adjust the lens to sensor distance. That would also apply if you fitted a Canon EF version to a C100 or C300. While the results obtained will probably suffice for most users, I doubt Sigma will be offering a service to shim EF or E-mount versions of the lenses to match a specific user’s camera. We believe you will be able to have the mounts swapped between EF, E-mount and PL, but only if you return the lens to a Sigma facility.

Anyone who is really fussy about getting the best ‘near parfocal’ behaviour should probably look at the PL version in the first instance. Having the PL version with a shimmable PL to E-mount adapter is probably the most flexible option for users of Sony FS and a7 / a6000 series cameras.

The only bit of information that we still don’t have is when exactly the PL mount version is going to ship. The E-mount and EF mount versions should ship on December 9th this year, with the PL said to be sometime in early 2017.