In the third part of my ongoing Panasonic DVX 200 review I want to look at 4K, UHD and the different frame rates, recording codecs and bitrates that are available.

This is a professional camera aimed at people working in broadcast and event coverage. The camera has several recording options available internally and the performance at the various resolutions is one of the main determining factors for shooters looking at it. The codecs also need to be robust and efficient enough to fit into a professional’s workflow.

My original plan was to go out and shoot a story with the camera, but I was in the middle of several corporate shoots and sadly didn’t have any time before I had to send the camera back to Panasonic. I’ve run some tests instead.

Many users of a camera like this will be using it for fast turnaround work, without the time for much post production. Getting a good result straight out of the camera is therefore imperative. In the first test I am not trying to get a filmic look. Instead, I wanted to see how the camera performs straight out of the box, using a Scene Profile that doesn’t require any colour grading.

I used Scene Profile 6 and had the Matrix set to Cine-Like, with the Gamma set to Cine-Like-D. All the shots you see were done at 500 ISO. The images in 4K are nice and sharp, and the camera is very capable of producing a nice REC.709 image straight out of the box without having to do any sort of colour grading. It is important to get your exposure right when shooting with the DVX 200. It does tend to clip highlights quite sharply, so that is something you need to be mindful of when shooting. There is some noise present in the dark parts of scenes, even at low ISOs. Rolling shutter is also more pronounced when recording in 4K or UHD, but more on this later.

Of course, many users will prefer a more filmic look. Above are a few clips that were shot in V-Log L, which I then graded with various film emulations and LUTs to so you can see what sort of results are possible. 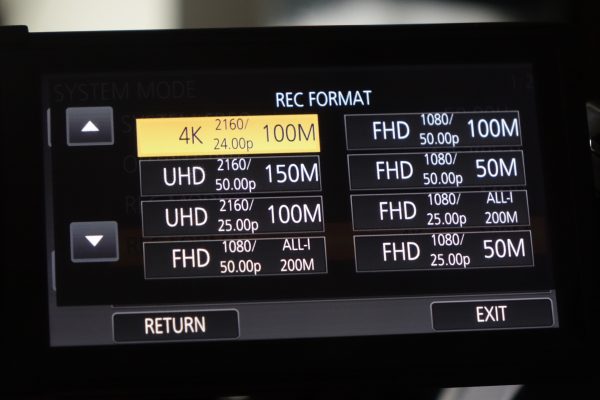 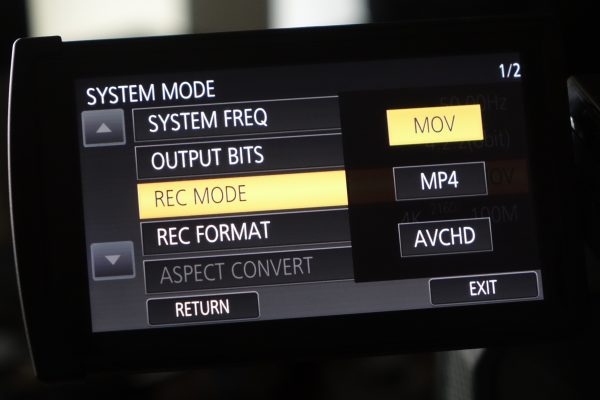 For internal SD card recording you have the choice of MOV, MP4 or AVCHD formats, all in 8-bit 4:2:0. Given the market the DVX200 is aiming at Panasonic have wisely decided to give it a lot of codec choices. Recording times have clearly been optimised to allow the camera to shoot 4K onto relatively inexpensive SD cards. Below is a list of recording times you can expect when shooting in various frame rates and codecs: 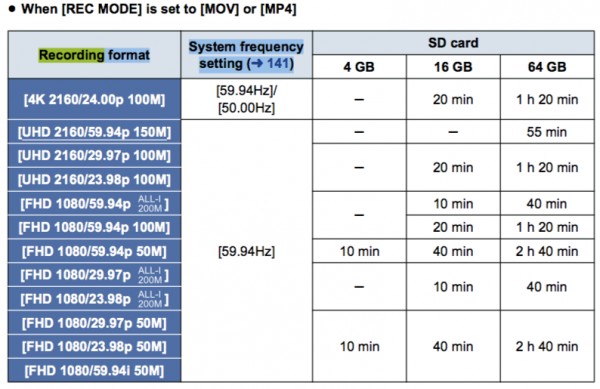 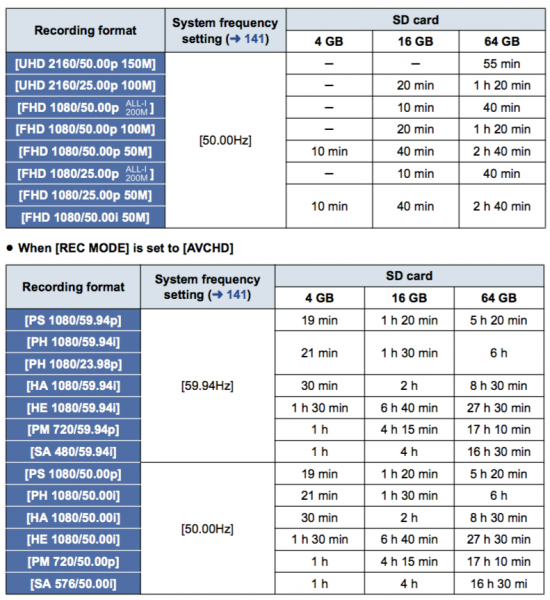 Sadly, as with almost every other Japanese camera, there is no Apple ProRes option. I wish Panasonic and the other Japanese makers would make the Apple codec a standard option. To get a ProRes workflow you need to add an external recorder like the Atomos Shogun.

I would also have preferred it if this camera could record at least 4:2:2 internally, ideally in 10-bit. If you plan on using this camera for a lot of broadcast work then you are likely to have to record externally. A lot of the documentary and current affairs shows I work for will only accept 4:2:2 8-bit or higher deliverables for the main “A” camera. One of the main reasons that the Canon C300 is so popular is that it records 4:2:2 8-bit internally.

If you want to record in HD then you can choose either MOV or MP4. You can record at 200Mb/s using the ALL-Intra format, in 1920x1080p 25,24 or 30p. According to Panasonic, ALL-Intra is a compression method that compresses each frame individually. This method results in larger file sizes, but it can minimise the deterioration in picture quality that occurs during editing. This is the highest data rate you can record on the camera regardless of what resolution you choose. You can also record at a lower 100 or 50Mb/s in 1920×1080 in 24, 25, 30, 50 or 60p, and 50 or 60i.

Another nice feature of the camera is the ability to record dual codecs to different SD cards simultaneously. This is available in all of the recording formats except for 4K 24p, UHD 60p and UHD 50p. It does, however, let you record UHD in 24, 25 or 30p and make a sub-recording in full 1920×1080 at 50Mb/s, which is quite impressive.

If you do want to record externally the camera can output either 4:2:2 10bit, or 8-bit over both SDI or HDMI to an appropriate recorder. The only trouble is that if you select to output 4:2:2 10-bit you can no longer record internally on the camera. This is far from ideal, but unfortunately that is a limitation of the model. The camera will also output full 4K (4096k2160) 24p or UHD 24/25/30p (3840k2160) over HDMI. The SDI is limited to outputting HD up to 60p. I outputted 4K, UHD and HD signals from the camera to the Convergent Design Odyssey 7Q+ and they all worked. The only thing you can’t do at this stage is get the camera to trigger record the Odyssey 7Q+ (something that should be possible with the Atomos Shogun). If you want to do any effects work, or more serious grading, then being able to record externally in 4:2:2 10-bit will definitely help.

To determine how robust the camera’s internal codecs are I did a few quick tests recording 4K 24p at 100Mb/s. Despite the codec having to compress all of that 4K information into a relatively small file, it does a pretty good job. If you try and do any drastic colour correction you will end up with problems thanks to the 8-bit 4:2:0, but if you get your white balance and exposure right in camera then you won’t run into problems doing minor corrections in post. Again, if you plan on doing any serious colour correction, effects or green screen work you will be better served by recording externally to a recorder such as the Odyssey 7Q+ or Atomos Shogun.

The camera also has the ability to record variable frame rates (VFR) up to 120fps in full HD. You can select a value between 2fps and 120fps. When you use VFR there are a long list of items on the camera that become disabled: dual codec recording, flash band compensation, relay recording, background recording, interval recording, Pre-Rec, Hybrid optical image stabiliser, area mode (for focus), focus transition, digital zoom, infared recording, Custom AF function and i zoom. In 1920×1080 recording at 120fps the material is fairly soft and doesn’t look as good as normal full HD. I found that anything below around 75fps was a lot better and more usable. The UHD 50/60p recordings are pretty good and at a 200% crop the image shows a lot more detail than the 120fps HD material. If you are familiar with 96fps on the Panasonic GH4 you will know what I am talking about.

If you set the frame rate between 100fps and 120fps, the angle of view will also change. (The colour of the frame rate value will change to blue.) As you can see from the above video, the crop isn’t really significant, but it is something to be aware of.

The camera is capable of producing nice results in either HD or 4K, even with its 8-bit limitations. 50 and 60p recording in HD and UHD also gives you a nice image but unfortunately when you go up to 100 and 120fps the image is quite soft.

The camera I tested is a pre-production version so all the current features and limitations are still subject to change.

In part four of my review I will be looking at the fixed Leica lens, OIS (optical image stabilisation) and auto focus options.