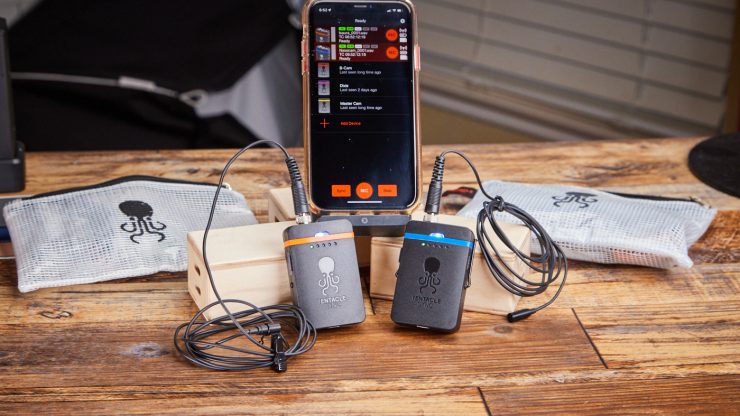 Tentacle Sync released Beta firmware for the TRACK E recorder back in December, and they just released v 2.0.3 which is the official version out of beta. I reviewed the TRACK E when it was first released so it’s worth a read if you are interested.

I’ve been testing it out and found it to be stable and functioning very well.
It is nice to be able to monitor the TRACK E via the app now; even though the latency is high, it gives me the reassurance I’m getting the audio recording more so than truly monitoring it like I normally would.
32-bit float recording also takes the worry out of poor recording levels, so yes. It’s a win-win!

The firmware update software will automatically check the version. If you agree, the Setup App will activate the bootloader mode on the TRACK E. It may take some time on a Windows computer because Windows might have to install a bootloader driver first. Also, ensure you have a solid USB connection during the update. In the unlikely case that the firmware update fails, your device will need to be restored.

To use the monitoring feature, just long-press the speaker button in the menu of the Setup App on your phone: A pop-up window will let you choose between two monitoring modes.

You can trigger all of the TRACK E recorders at the same time by tapping on REC and stopping all of them as well with a long press of the STOP icon. For individual start and stop, you select the TRACK E and control it individually. All with matching timecode as the TRACK E will warn you if the devices are not synced. When that happens, you tap on the SYNC button, and bam! You are ready to roll.

You need to keep the app open to monitor the audio. If a phone call comes in while you are monitoring, the feature still works as long as you don’t answer the call. It would be a good idea to put your phone in Airplane Mode to avoid this issue. Another potential problem is holding the phone while shooting can be awkward, but the feature isn’t designed for constant monitoring.

Not only can you monitor the live recording with the app, but you can also playback the recordings and hear them all with your mobile device. This is very handy and a quick way to check without going to the TRACK E and plugging in headphones, especially if the TRACK E is tucked under clothing.

Latency is the one thing about the TRACK E that I wish was less. Tentacle Sync stated the latency is approximately 500ms or .5 seconds. While this is pretty high, it shouldn’t be a surprise as Bluetooth has its limitations. The feature is for checking the audio and making sure it sounds good, more so than live monitoring. Either way, I like the idea and the option. One issue with not constantly monitoring is the possibility of audio pops and cable noise. The 32-bit float won’t help with that.

Bluetooth 5.0 has limitations, and Tentacle Sync is considering opening up the possibility for the user to select the latency performance vs. getting a solid, consistent signal. You can’t have it both ways, so they decided on a stable signal. It would be good to add the feature and let the user dial in the least amount of latency for the situation. Often, the subject isn’t that far from the camera, and a lower setting could be a great option.

Ever leave your phone on the table and walk around the house and go outside while listening to music or taking a call with your Bluetooth headphones and they cut out? While the tech is great it has limits. Bluetooth 5 is a significant improvement over Bluetooth 4.2. It has a range of approximately 400 feet or 122 meters line of sight, which is significantly better than the old 4.2 version.

I like this update a lot. Matt has also been using several TRACK E’s at the same time and monitoring the audio on a few jobs with success.
I use a wireless system most of the time, and while it’s convenient for everyone, you can’t beat the audio quality of a hardline microphone, and the best you can get is using a separate audio recorder. The TRACK E is so small and includes a 32-bit float recording option that I can monitor from the app and control the start and stop, making the device very user-friendly. I feel I get the best of both worlds at an affordable price of only $349.00. The included lav mic is also pretty good for an entry-level microphone. I use my Sanken COS 11 with it, and it’s a great audio kit.

Don’t forget it can also receive a timecode jam from a camera that has a timecode IO. You will need the right 3.5mm to BNC or another connector to use this feature. Tentacle Sync has several cables for different cameras available. You can also pair the TRACK E with a SYNC E if you are using a camera that doesn’t have a TC jam option. If you want to learn all the details on the TRACK E here is the user manual.

Yes. I like the update a lot. Excellent work, Tentacle Sync!