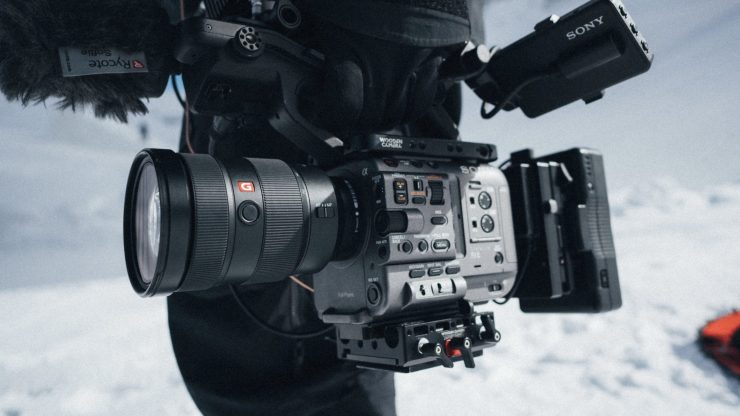 Sony’s V.2.00 Firmware for the FX6 that was announced a few weeks ago is now available to download.

The FX6 is now capable of outputting 16-bit RAW over HDMI that can then be recorded as ProRes RAW on a compatible Atomos device such as a Ninja V or Ninja V+.

The inclusion of RAW out via HDMI certainly increases the FX6’s versatility. The NINJA V and NINJA V+ provide the entry point for Sony’s FX3 and FX6 to use HDMI with resolutions up to 4.2K and up to 60fps.

ProRes RAW over HDMI with the NINJA V/V+ when combined with Sony’s FX6 supports 4.2K up to 60fps. There is a caveat with recording RAW over HDMI with the FX6. You can’t record 4K RAW at up to 120p, because that can only be done with a NINJA V+ Pro Kit/ NINJA V+ and SDI module with SDI. RAW Activation for RAW support, including HDMI cross conversion, activation of the supplemental RAW license can be completed online using the my.atomos.com portal.

Until this update, Sony’s FX6 has only been able to record ProRes RAW when combined with the NINJA V/V+ over SDI. This has required customers to purchase the AtomX SDI expansion module for the NINJA V/V+.

Sony states that as of January 2022, only the Atomos Ninja V and Ninja V + can be used. This could potentially mean that other solutions from other manufacturers could appear at a later date.

AF Tracking allows you to touch the LCD screen and that is where the camera will focus. The touch tracking AF works hand-in-hand with the FX6’s face detection AF. When selecting an object that isn’t a person’s face the camera will focus on that object no matter where it moves within the frame. Touch AF, which has been available on Canon Cinema EOS and mirrorless cameras for years, makes it easy to do repeatable focus pulls between two different objects.

Focus breathing compensation can be used in conjunction with AF. This is not a new feature as it was first implemented in the a7IV, but it is new to the FX6. So how does it work? Well, it electronically adjusts the size of the frame to minimize any lens breathing while you are changing the focus. It is designed to try and hide focus changes that are common when using stills lenses. You can turn this feature off if you don’t like the results. This is not going to magically turn your stills lens into a cine lens, but it will help alleviate some of the breathing.

Breathing Compensation cannot be used when Distortion Comp. is OFF; when shooting in S&Q mode; or when the Rec Format codec is RAW or a selection that includes RAW. For the supported lenses, please check here.

Bokeh control mode takes advantage of the variable ND filter that is found on the FX6. This mode automatically adjusts the ND filter and gain when the iris is operated.

This isn’t exactly a new feature because you have always been able to do the exact same thing when using any Sony camera that has variable ND. By selecting the Auto Gain/ISO function and setting the variable ND to Auto anytime you made changes to your aperture the brightness level compensated to keep the same level of image brightness.

All Sony has done now is to make this a single setting that you can select instead of having to manually change two other settings. This works well, however, I am always personally wary of ever selecting Auto Gain/ISO on any camera because you can quickly find your image becoming very noisy.

This function is only available with E-mount lenses that can communicate with the FX6, and the maximum effect can only be obtained through the operation of the iris ring. Depending on the speed of operation, lens, shooting settings, and subject, the image may appear different and the
brightness may change. The brightness may change when the direction of operation is reversed, such as when opening the iris after closing it, or when closing it after opening it. Sony highly recommends performing a camera test prior to shooting.

Cache recording is something the camera arguably should have had at launch. This isn’t some type of magical new feature and cameras have had cache record for a long, long time.

Cache recording can be used in both the S&Q and the normal shooting modes. When it is activated a memory buffer is constantly storing a certain number of seconds of footage (this depends on what resolution and frame rate you are shooting in). When you hit the record button, that cache gets written to the card so you end up with a certain number of seconds before you hot record. This is good for certain shooting situations where you could potentially miss something. What you clearly need to remember is that if you don’t have the camera pointing in the right direction it is going to be pretty pointless. A cache period of up to 31 seconds is available depending on the resolution and frame rate. Sony gives you the option to set the cache to short/medium/long and max. You should also be aware that cache recording when turned on will drain your battery quicker.

Again, this is another feature that should have been available from day one. The camera has always been capable of recording four channels of audio but somehow Sony didn’t think that anyone actually needed to see four audio channels! Now, you can finally see the audio levels for four channels as well as independently select to monitor either channels 1 & 2 as well as 3 & 4 on the LCD.

These are nice updates and if you are an FX6 owner you are going to be pretty happy. Arguably some of these features should have been in the camera from day one and Sony does have a habit of releasing firmware updates over a long period of time for its cameras. I think what frustrates some owners is that Sony announces a camera with a lot of features that are not available at launch. On the positive side, Sony has constantly included a lot of new features and functionality into its cameras that were never initially promised.