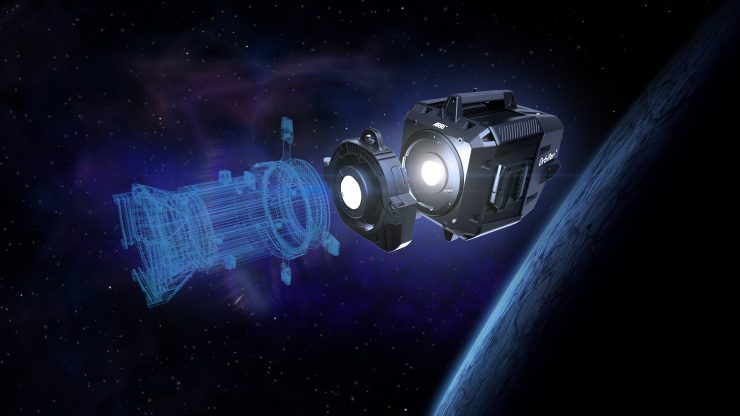 ARRI has expanded its luminaire accessory range for the Orbiter by introducing the Orbiter Docking Ring, the Orbiter Bag-o-Light, Orbiter Glass Cover, and Orbiter Dome Mini.

The Orbiter Docking Ring is an accessory enhancement that attaches to the Quick Lighting Mount (QLM) system. This new Docking Ring allows the Orbiter to accept various industry-standard third-party optics. This opens the Orbiter up to a vast array of lighting modifiers from other manufacturers and it now makes the Orbiter a more appealing option as you’re no longer limited to just using ARRI luminaire accessories.

ARRI claims that the optical design of the Orbiter Docking Ring boosts the performance of older tools in output, optical performance, and homogeneity.

The adapter connects without any additional tools onto the QLM of the Orbiter. The Docking Ring is automatically recognized by the luminaire and also the light output is automatically adjusted for ultimate performance. Due to the built-in automatic, low-noise cooling fan, the use of third-party optics is also safe.

The tool allows the attachment of a wide range of compatible optics from various manufacturers including projection optics, Fresnel, and Cyc-opticsts that are up to a weight of 7.9 kg / 17.4 lbs.

Now, strangely ARRI doesn’t list exactly what third-party accessories will be compatible with this mount, but above I have included a diagram that shows you its dimensions.

The Orbiter Bag-o-Light was designed so that users can create pleasing, soft, and almost shadow-free illumination. The accessory is essentially a huge tube that can be attached to Orbiter’s 15° Open Face optic. When this accessory is inflated, it is 2m long with a diameter of 22cm and it weighs less than 0.86 kg / 1.89 lbs.

The Orbiter Glass Cover is a small, compact, and lightweight optical accessory. By using ultra-translucent glass, the Glass Cover allows for full, unrestricted light output without impacting color temperature or quality. It is ideal for near-distance applications with limited available space where much light is needed. Additionally, the Glass Cover simultaneously protects the Orbiter’s light engine and can be used instead of the transport cap cover.

The Orbiter Dome Mini provides omnidirectional light at a high intensity. Compared to the Dome optic, the Dome Mini is a compact version and a lot smaller and lighter. Its highly translucent material keeps the light output loss to a minimum compared to the usually larger, cloth-based domes. The light it produces is great for near-distance applications with limited available space. The QLM in Orbiter allows for quick and easy attachment of the Dome Mini.

There is no current information available about pricing or avaialbility.