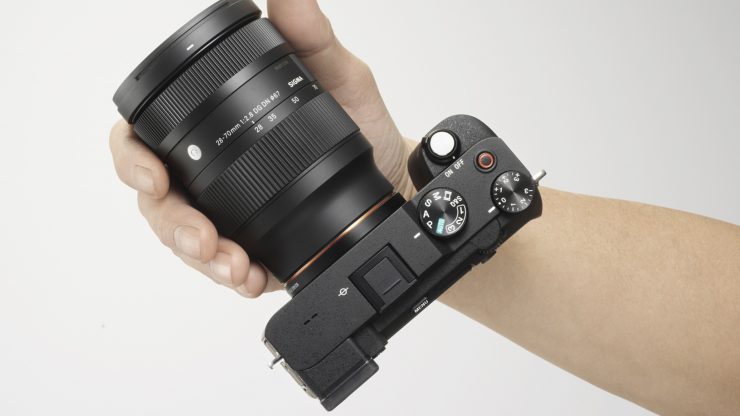 This lens is available in either L-Mount or Sony E-mount.

The 28-70mm F2.8 DG DN is based on Sigma’s existing 24-70mm F2.8 DG DN lens, however, by making the widest focal length 28mm instead of 24mm, Sigma has been able to make this lens significantly smaller and lighter. According to Sigma, this is the smallest and lightest lens in its class.

To keep the weight down the lens features a simpler dust- and splash-proof structure and smaller switches. Sigma is also using just one lightweight focusing element, which keeps the AF unit small.

Now, the lens isn’t made out of metal, instead, it uses a type of polycarbonate called TSC (Thermally Stable Composite), which has a comparable level of thermal shrinkage to aluminum. This helps reduce differences between the thermal shrinkage of the metal and non-metal parts, ensuring stable levels of performance even in an environment with extreme temperature changes. The use of polycarbonates in the construction of zoom and focus rings can make their operation feel less premium, however, Sigma claims that the operation of the lens is still smooth and consistent.

Despite using fewer elements in total than the 24-70mm F2.8 DG DN | Art, Sigma claims that the design results in a thorough correction of axial chromatic aberration and sagittal coma aberration, which cannot be corrected in-camera, allowing users to create images that are uniformly sharp from the center to the edges of the frame.

Along with its anti-ghosting design, the use of Super Multi-Layer Coating and Nano Porous Coating is claimed to control flare for high-contrast results in backlit conditions. It also features a water and oil repellant coating on the front side of the lens.

28-70mm focal length lenses are not overly common. Sony has its own FE 28-70mm f/3.5-5.6 OSS Lens but that features a variable aperture and is more of an affordable kit style lens than anything else.