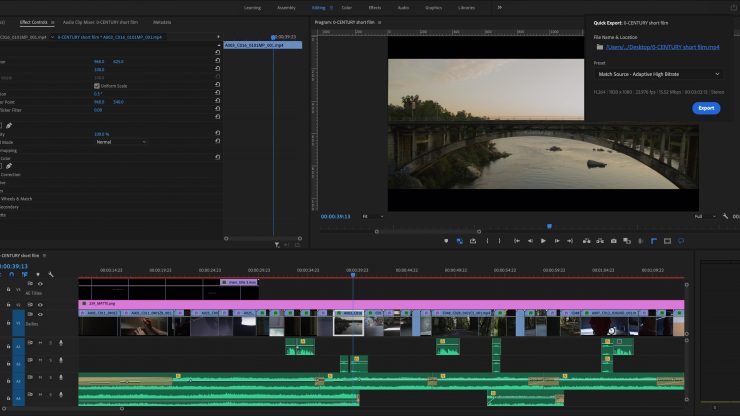 Editors can choose from the default high-quality H.264 output with matched Source Settings or select from a shortlist of H.264 presets that allow them to reduce the size of their export files.

With the new Media Replacement functionality, users will be able to swap out media in the template. After Effects users who are authoring Motion Graphics templates can designate media within the templates as replaceable. Premiere Pro editors can drag and drop new graphics, like a company logo, or a new video, into the template, instantly customizing it. The workflow will provide new efficiencies in versioning and localization and offer a new tool for templating elements within video projects.

Optimizations for AMD APUs is claimed to provide up to 4x faster rendering and smoother playback for 4K sequences thanks to improved memory usage. Users running Creative Cloud video applications on systems with AMD’s integrated chipset should see immediate improvements with this release.

Feature updates in Premiere Rush include thumbnails for each audio track in the built-in library of royalty-free sounds. These provide for better visual cues. There is also new language support includes Dutch, Polish, Swedish, Turkish, and Traditional Chinese. Rush is now available in 15 languages.

These updates are coming soon to Premiere Rush.