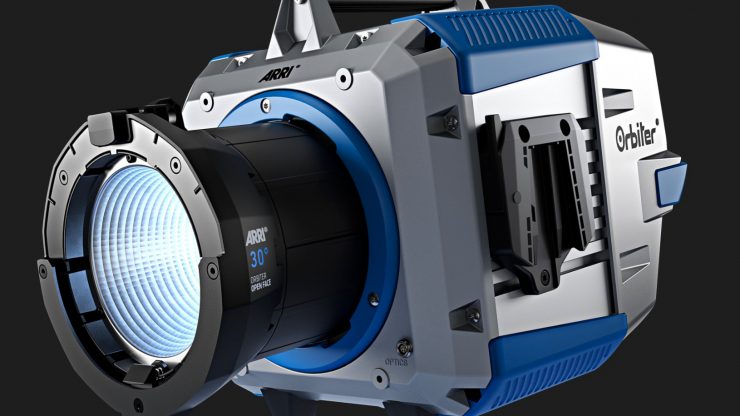 It has been quite a long wait, but ARRI’s Orbiter has now started shipping. Production has ramped up and the first customer shipments are already underway.

The Orbitor was announced back in September 2019. Above you can see my interview with Florian Bloch from ARRI at IBC 2019.

Orbiter is manufactured at the ARRI Lighting factory in Stephanskirchen, Germany. This is the same factory that makes the SkyPanel series.

At the factory, a completely new production concept was developed for the assembly, evaluation, and testing of the Orbiter.

Orbiter is available with a wide range of accessories and it has the added ability to easily attach and change a variety of optics by using the Quick Lighting Mount (QLM) system. What this essentially means, is that you can change the optics that the Orbiter uses to turn it into a variety of different lighting fixtures. It is this versatility that makes Orbiter an appealing lighting solution.

The new Lighting Operating System, LiOS is pre-programmed into the Orbiter units. This system is highly expandable and it allows ARRI to continually add features through firmware updates. If you look at the SkyPanel series, they have had countless firmware updates over the years.

If you want to know more about the Orbiter above you can watch a tech talk from ARRI.

Orbiter comes with an extended 3-year warranty as well as 5 years for electronic parts and 10 years for spare parts and is available in the ARRI silver and blue colors as well as a black version.