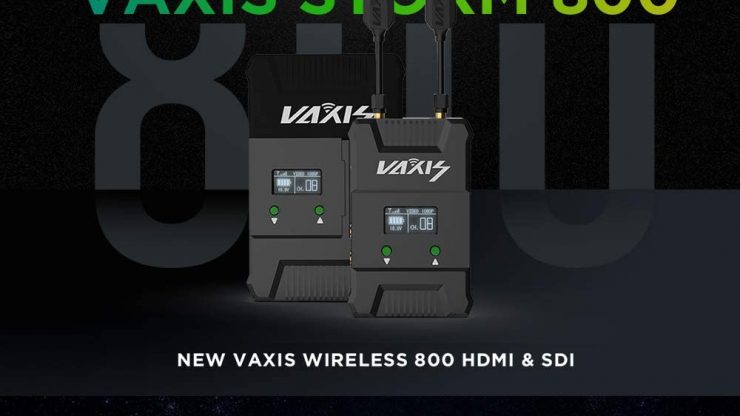 Summer is generally a good time for sales and Vaxis has one that will last for several weeks with new products released in stages at discount prices. This sale is for the US market only, unfortunately.

Here’s is what’s next!

The Vaxis Storm 800 is an entry-level wireless transmission system featuring an 800′ range. It supports up to 1080p60 uncompressed signal transmission with less than 1 ms of latency over the 5.1 to 5.9 GHz license-free operation frequency. The transmitter features 3G-SDI and HDMI inputs plus a 3G-SDI loop output for local monitoring, and it comes with an L-series battery plate. The receiver offers 3G-SDI and HDMI outputs and has a V-mount plate. Both units also support continuous power via 2-pin LEMO power inputs. Two D-Tap to LEMO cables are included for running power from D-Tap sources.

Both units have an OLED screen that confirms various parameters. The transmitter is capable of multicasting to up to 10 receivers at the same time. The Storm 800 system accepts and transmits camera timecode, metadata, and start/stop flags for ARRI, Canon, RED, Panasonic, and Sony cameras. It also has a built-in HDMI to SDI converter. Both units feature a robust metal housing.

The first Vaxis product is the Atom 500 wireless system on sale for $299 USD. through August 21st. This deal looks to only be available through certain US retailers. If you are outside of the US, you would have to order from America to take advantage of the deal.

Matt reviewed the Atom 500 back in February. You can see that review here.

Key Feature of the Vaxis Atom 500

With the Atom 500 HDMI Wireless Video Transmission Kit from Vaxis you can transmit visually lossless, uncompressed video signals to the Vaxis receiver with very low latency. The transmitter sends a line-of-sight signal up to 500′ and it can also multicast via Wi-Fi to up to four mobile devices for monitoring.

The transmitter features one HDMI input and one HDMI loop output, and the receiver has two HDMI outputs. Together they support up to 1080p60 uncompressed video transmissions with less than 1 ms latency. The transmitter also supports multicast over Wi-Fi to up to four mobile iOS devices using the Vaxis Vision app for monitoring.

Each unit features a bright, clear OLED display and they have a cooling fan that can be turned on and off to prevent noise during your production. They can be powered using its USB Type-C connector with the included cable or by using a separately available L-series battery. The USB input can also be used to upgrade the firmware.

This is one of several sales from Vaxis. I will update this post for the next item on August 21st.