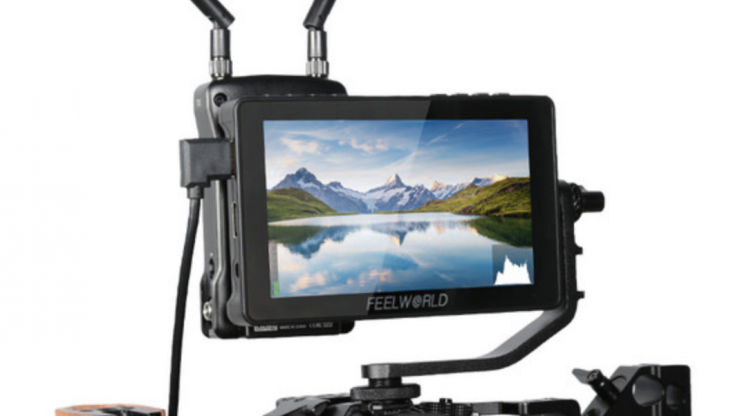 Feelworld has announced its new F5 Pro Touchscreen Monitor. The F5 features a 5.5″ IPS FHD 1920×1080 screen. The monitor is also sold by CAME-TV.

This a very affordable entry-level monitor that still comes with a lot of functionality and features.

The screen as I mentioned is a full HD IPS panel and it has a claimed contrast ratio of 1000:1and a PPI of 400. The screen is not that bright though as it only has a claimed brightness of 500nits.

As it has a DC out you can power your camera through an optional dummy battery adapter directly from the monitor.

If you don’t want to use the touchscreen functionality you can use physical controls instead.

As far as monitoring tools are concerned, the F5 Pro comes with a 12 different options.

What is nice is that you can attach CAME-TV’s Crystal-V wireless RX unit to the back of it as well as a Sony NP battery. This way you can turn the F5 Pro into a fairly compact and affordable wireless directors monitor.

I previously reviewed the CAME-TV Crystal-V on the site. At $578 USD it certainly represents pretty good value for money.

Because of the battery and accessory mounting plate design, you can also attach a variety of other accessories.

For further mounting, the monitor as two 1/4 -20″ threads on it. It also comes with a mounting bracket that attaches to a cold shoe receptor.

The Feelworld F5 Pro also comes with a sun hood.

The F5 Pro is now available to pre-order. It is very affordable and details for just $139.99 USD.