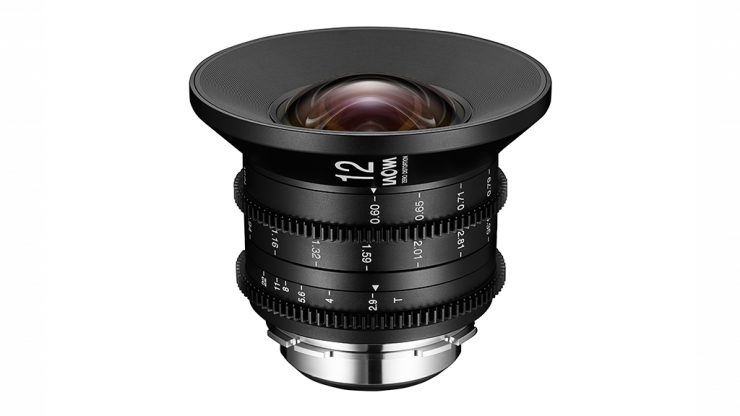 The Laowa 12mm t/2.9 Zero-D Cine lens is finally available to order for $1,499 USD. The lens was announced almost a year ago and it has taken a long time to get to market. It was supposed to start shipping in the middle of 2019.

Laowa claims that the new 12mm lens is currently the widest t/2.9 lens that can cover sensors up to Vista Vision size. Technically that is correct if you are talking about lenses with a T2.9 aperture. However, ARRI has a 12mm T1.8 Signature Prime.

The 12mm t/2.9 Zero-D Cine is based on the same optics used in Laowa’s regular 12mm f/3 Zero-D lens. Essentially, like a lot of affordable cine lenses, it is a re-housed stills lens.

Despite being a re-housing of a stills lens, the cine version is only $500 USD more than the standard lens.

The lens features standard 0.8 mod gears on both aperture and focusing rings, as well as an extended 270° smooth focus throw. The entire enclosure is made out of aluminum alloy.

A 114mm step-ring is included in the package to expand the front diameter to fit with industry sized matte box. Venus Optics have tested with a number of matte boxes in the market and it is still free of vignetting on VV sensor with the matte box installed.

What you clearly need to remember is there isn’t any way of attaching any type of filter to the front of this lens, so you will need to use a matte box if you are using it on a camera that doesn’t have built-in ND.

The lens will cover a 44.7mm image circle. This allows cinematographers to not only use the lens on full-frame sensors but also on Vista Vision sensors such as the RED Monstro and the ARRI Alexa LF (open-gate 44.7mm) fully.

The lens is also ideal for Super35-sized camera owners with the ultra-wide 17mm equivalent field of view. It is certainly a lens that you can use today and in the future if you decide to buy a camera with a larger sensor.

The lens is extremely compact and lightweight for a wide-angle prime that covers such large sensors. It measures in at 3.4” (87mm) long and weighs less than 1.5 lb (675g). This makes it ideal for people wanting to use it on gimbals or drones.

People tend to steer clear of using ultra-wide-angle lenses because of the extreme optical distortion they usually create. A good wide-angle lens should have no more than 2-4% distortion. Laowa claims that they have been able to compress the distortion to a close-to-zero level.

The lens is able to focus anywhere from 7” away from the sensor (<4” from the front element) all the way to infinity. Wide-angle lenses usually create a ‘flat’ image with very deep DOF but with this lens, the close focusing ability, and a fast t-stop, the Laowa 12mm is able to create a unique wide and shallow DOF look with pleasing bokeh.

This is not Laowa’s first PL mount lens. Their 24mm f/14 2X Macro Probe has been available in PL mount for some time.

Laowa is slowly introducing more cine modded versions of their stills lenses. We are still waiting on the OOOM zoom lens that has been shown at trade shows over the last few years to become available.

The lens is available in PL mount, as well as Canon EF, and Sony E-mount. The PL mount version is now shipping, while the EF / E mount will be shipping in late January.

This looks to be a really good ultra-wide-angle lens for full-frame and larger sensors. At $1,499 USD it is also extremely affordable. I am sure this is going to be a very popular lens amongst the filming community.