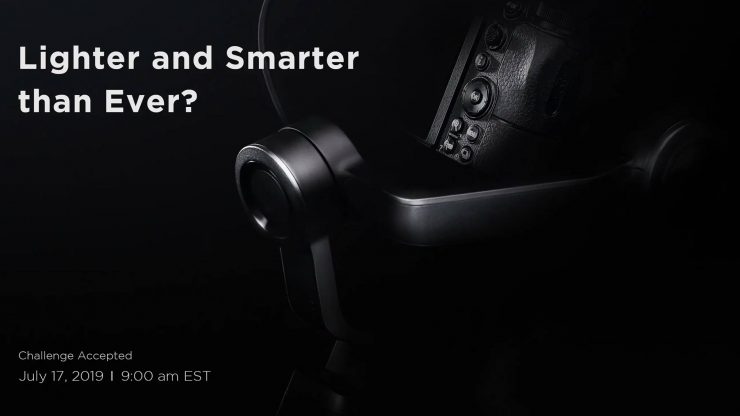 DJI has teased a new handheld gimbal that is meant to be lighter and smarter.

Looking at the teaser image, you can see a Nikon Z6/Z7 being mounted so the gimbal is most likely designed for smaller mirrorless cameras.

The Ronin-S was DJI’s first single-handle gimbal. When Erik reviewed the Ronin-S he highlighted that while the gimbal could support a large payload, at approximately 8lbs, it was also one of the heaviest gimbals at 1.86 kg (4.1 lb). It’s no wonder that DJI would want to release a lighter gimbal that is easier to hold for a longer time.

Only a few weeks ago, DJI released the Switch Grip accessory for the Ronin-S which added dual handles.

Or maybe a new Ronin-MX?

The Ronin-MX was announced in NAB 2016 and added a larger power source, better ergonomics, and could carry a larger payload like a RED. But this is also where things became excessive, with a larger payload, the whole gimbal package became heavier to hold.

It’s quite interesting to see the constant changes and trends that gimbals have gone through over the past few years while trying to find the perfect balance between payloads, total gimbal weight and performance.

What are you looking for in a new gimbal? It will be interesting to see what angle DJI goes for with Zhiyun and others experimenting with new forms of gimbals like seen in the Weebil Lab & Crane 3 LAB.

Zhiyun is also expected to release the upcoming Crane-M2 which is designed for smaller mirrorless cameras like the Sony A6500 with a max payload of 650 g (22.9 oz).