The Insta360 ONE compact 360 camera was announced back in July 2017, and now the company has announced its successor in the ONE X. 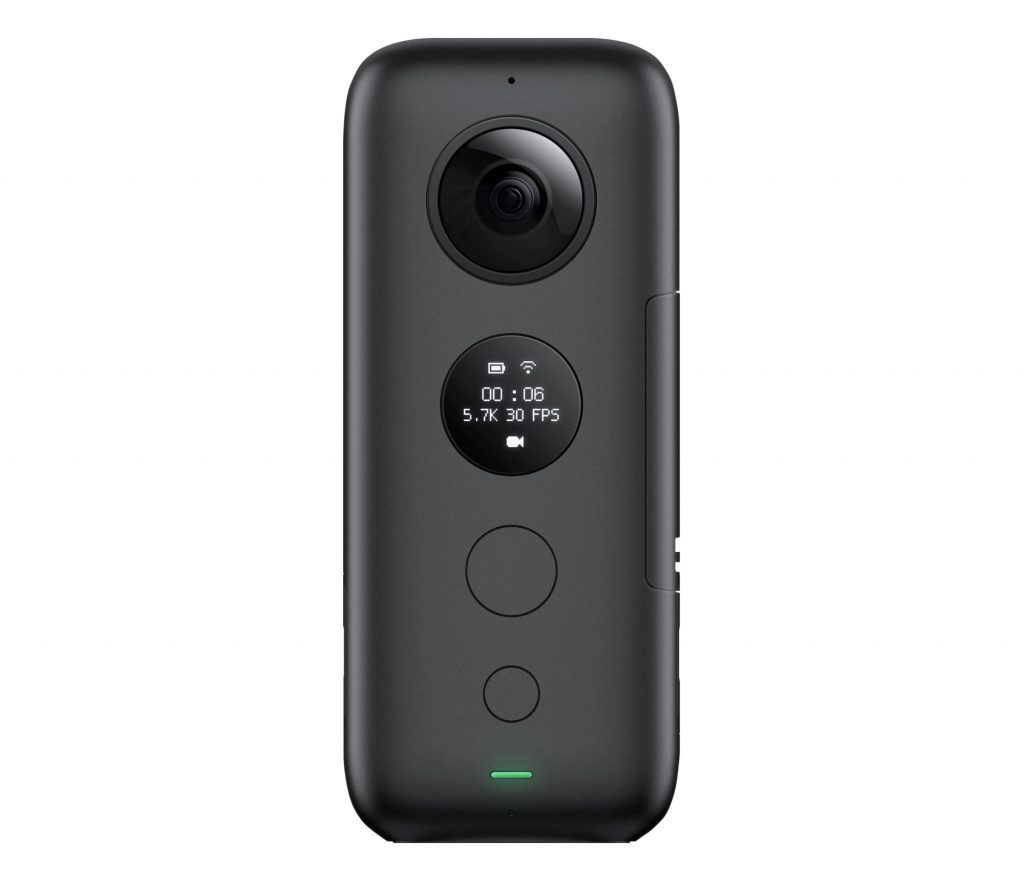 The ONE X can now capture at up to 360 video at up to 5.7K at 30 fps. Shooting at higher resolutions is important for 360 capture since you have a much wider field of view than when shooting 2D so the increase in resolution from the previous ONE at 4K is a welcome addition.

Just like the original Insta360 ONE, they are targetting the camera at the action camera market, in particular, the GoPro. Insta360 focuses on the flexibility of being able to reframe the shot due to 360 capture as a key advantage. In addition to this, Insta360 also claims FlowState Stabilization to perform better than the new HyperSmooth feature in the GoPro HERO 7. You can judge for yourself in the video below.

The video above demonstrates a few points, the footage is clearly sharper in the 2D cameras since the maximum resolution is not spread over the full 360-degree capture but in certain situations like this, it helps that the operator doesn’t have to worry about framing the shot. 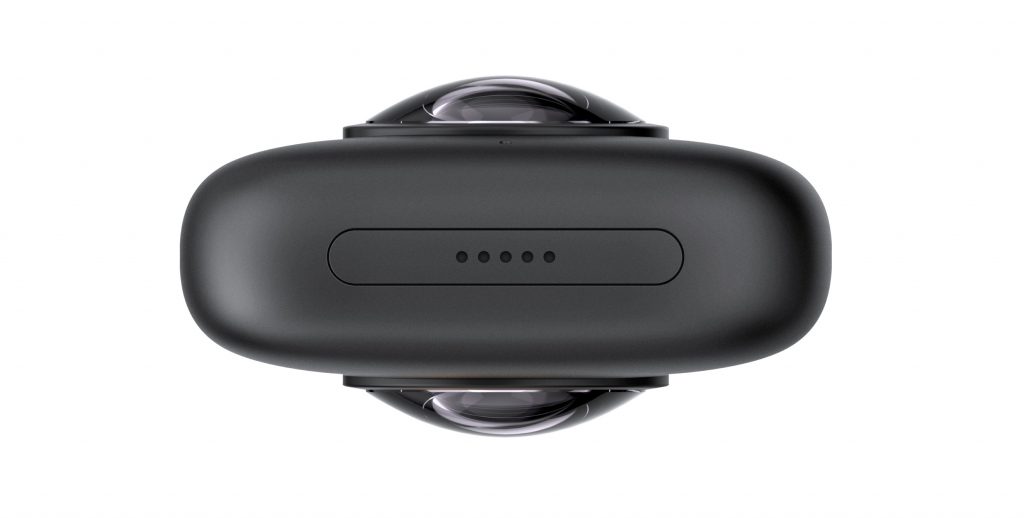 The ONE X records in H.264 and can record 18mp images. A Log 360 capture mode is available for high dynamic scenes. It has a removable 1200 mAh that can last for approximately 60 minutes while shooting 5.7K 30fps. Sharing & editing the footage can be done on an iOS or Android mobile device, connecting to the camera via WiFi. A direct connection can also be used to transfer files to a smartphone device using the included Lighting, USB Type-C or Micro-USB cables. A micro-SD port is also found on the bottom of the camera along with the 1/4″-20 thread for mounting to a tripod or other accessory.

Two buttons on the front of the unit provide easy menu access and control. 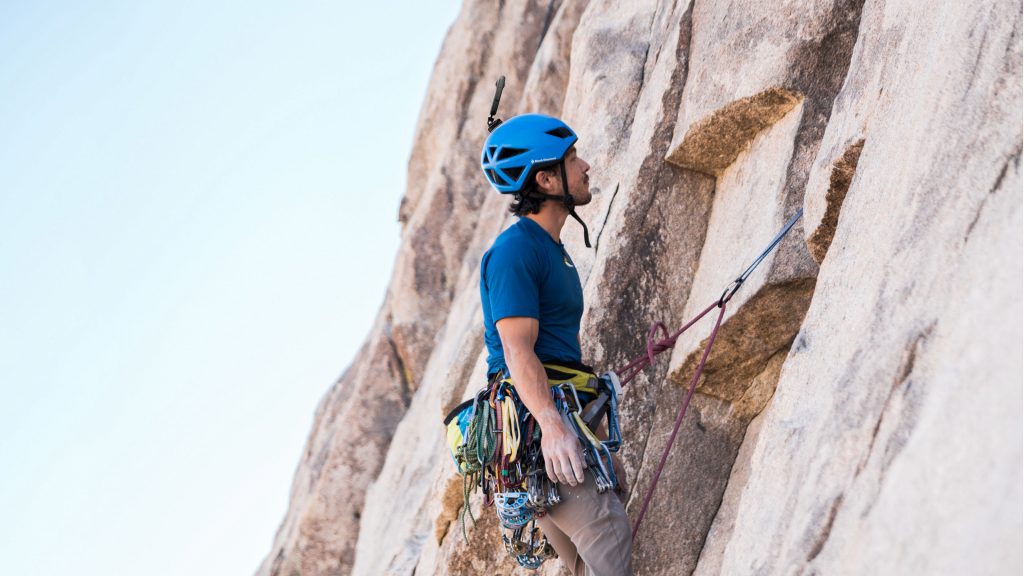 With the ONE X, Insta360 is introducing a new accessory called the Drifter which basically turns the camera into a mini football that can be launched through the air. Now, we have seen these types of accessories like the AER, for the GoPro and other action cameras but since they don’t capture 360, the camera has to be front facing. With the ONE X, the frame can always be repositioned after the throw, letting you frame up the action how you want it. 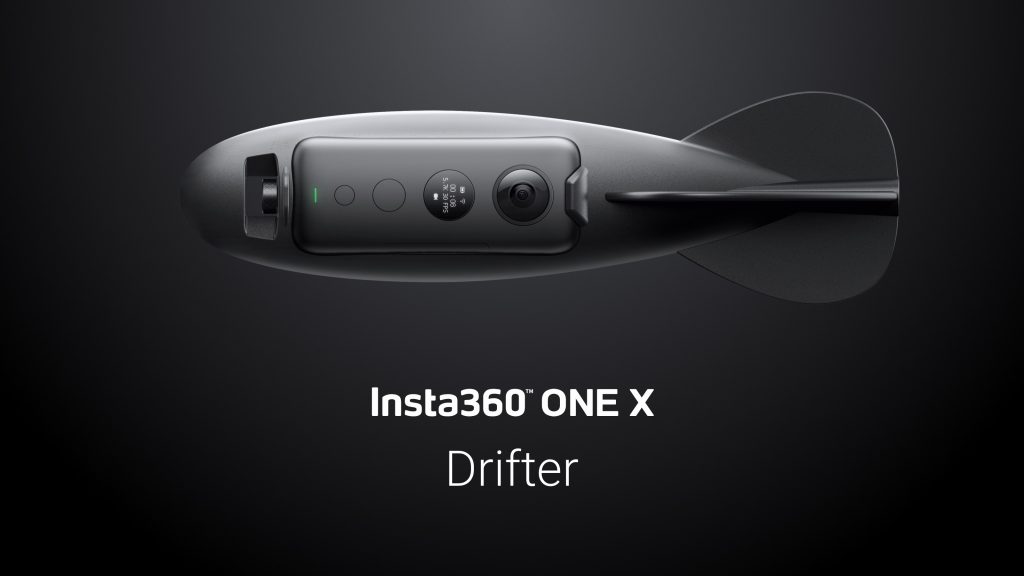 Combined with high-speed capture (3K at 100fps/4K at 50fps), you can get quite creative, especially with action sports. You do notice some stitching artefacts in these demo shots.

The Drifter looks just like a Nerf Vortex Aero, with rear fins to keep it stable in the air. The ONE X mounts securely using the 1/4″ thread on the bottom of the camera. 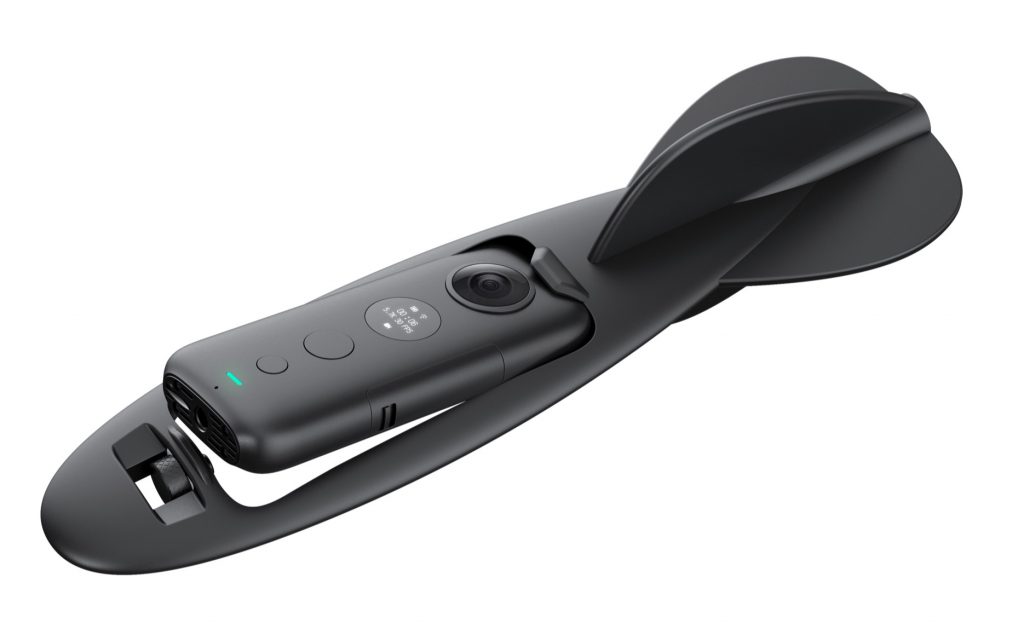 Made for the outdoors

Other accessories include the Venture Case that provides splash proofing and waterproofing to 5 meters. 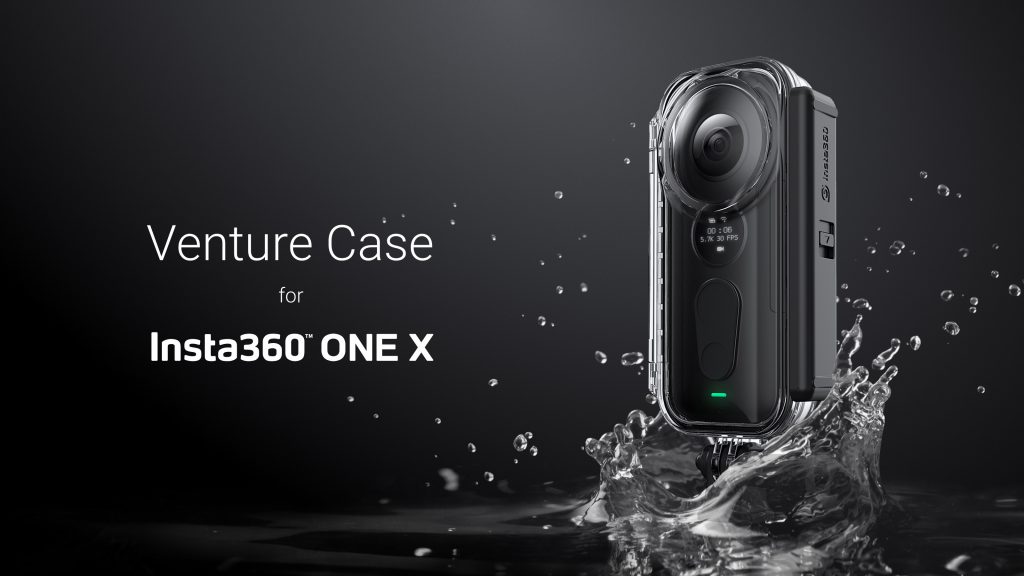 For those wanting to take the ONE X deeper, there is also a Dive case that has a specialised dome lens and can go down to 30 meters. 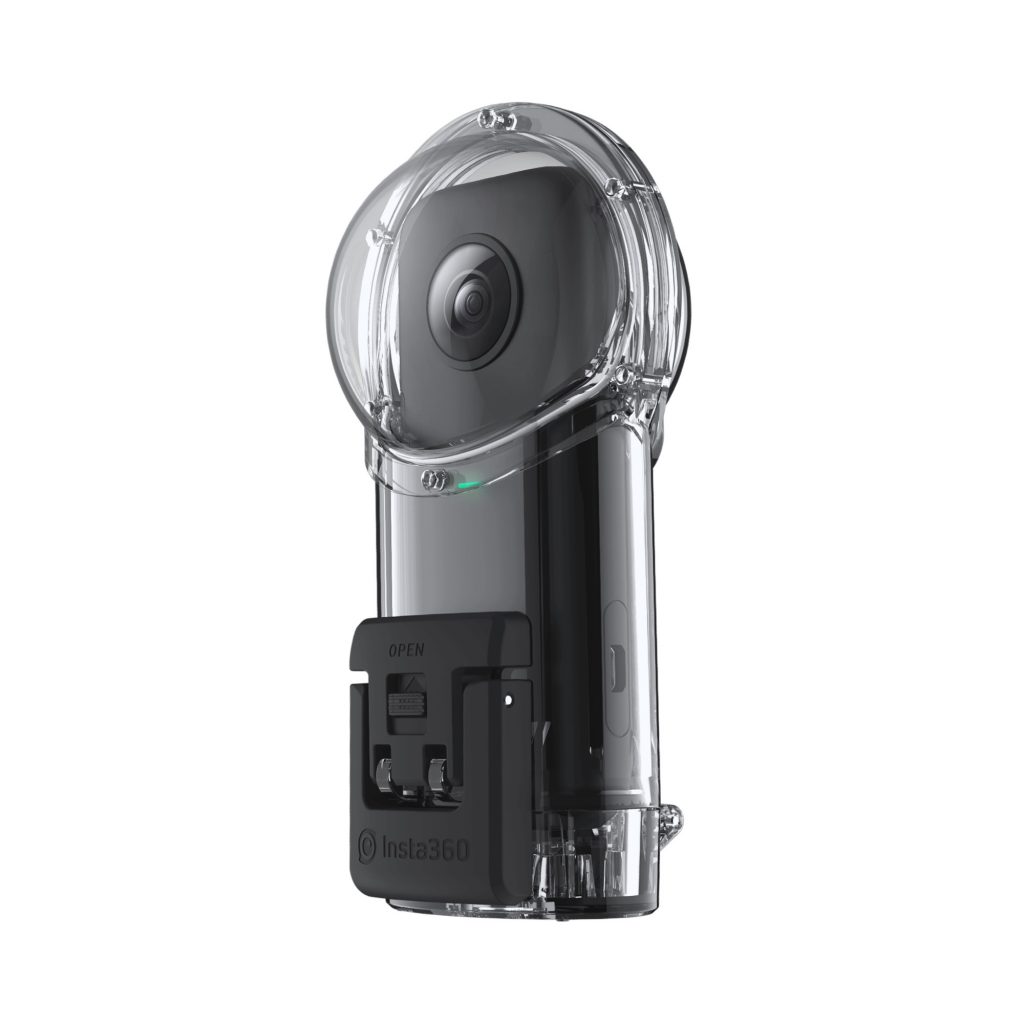 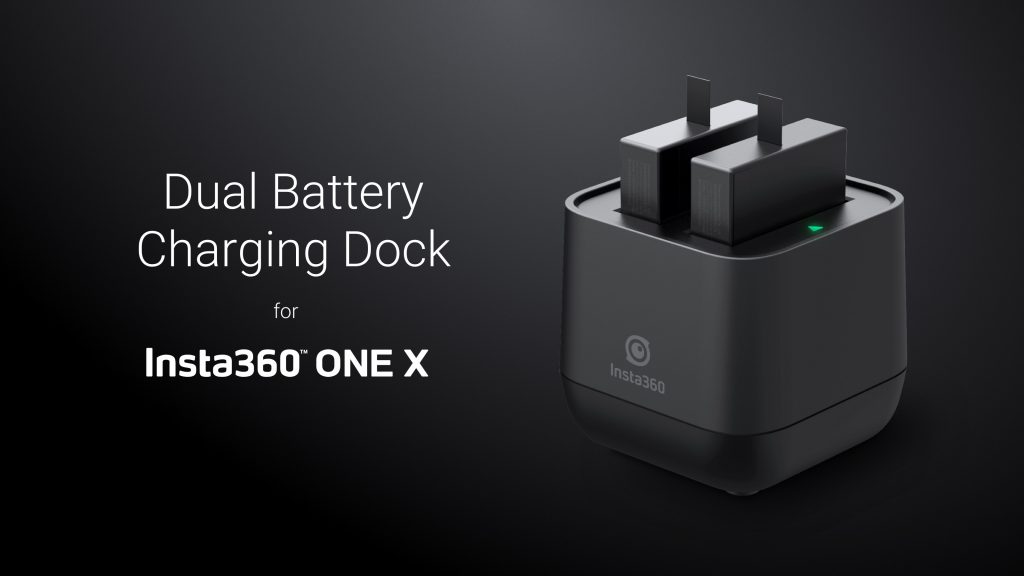 The Insta360 ONE X is priced at $399.95 USD and available now at www.Insta360.com and via select retailers worldwide.

The Human Eyes VUZE XR is also set for release later this year and offers 5.7K 180-degree VR & 360-degree capture, retailing for $439 USD. It features a unique flip-out mode when capturing in 180-degrees.