Insta360 ONE is a 360 panoramic camera with built-in six-axis stabilisation that can shoot ultra-HD and 120 fps HD videos. Insta360 allows users to do 360 degree live streaming on social media platforms such as Facebook, YouTube, Periscope and Weibo. 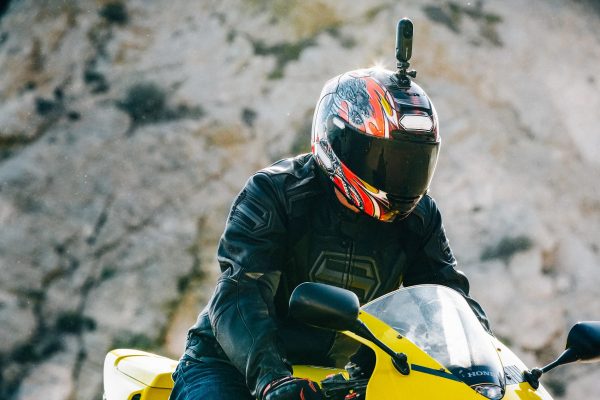 The company wants to change the way consumers capture and share traditionally framed video, and so they set out to make the Insta360 ONE. In the simplest of terms it’s best to think of it as a 360 degree panoramic GoPro.

What it offers over traditional action cameras is that you can capture a 360 degree perspective from one camera and then choose your HD spherical frame from that vision. This gives you creative control and the ability to use multiple different angles from a single camera. From the video quality I have seen it is ok, but it’s not going to rival something from a GoPro Hero5 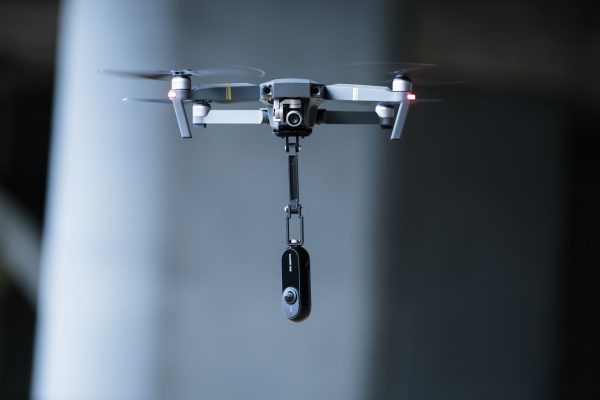 The iPhone-compatible version is available now, with an Android version on the way.


The Insta360 ONE uses new technology they are calling FreeCapture. FreeCapture lets users hone in on the key moments of a spherical video, and then translate the original 360 footage into a standard 1080p fixed-frame video that you can share on social media sites.

The process to create a FreeCapture video on the ONE is pretty simple. First, you hit record to capture in 360°. Even if you’re not delivering to VR or a 360 player, the idea is to mimic a multi-cam setup that covers every angle of the scene.

Then, when you’re done filming, you connect the ONE to your phone and offload the footage. FreeCapture uses your phone’s onboard gyroscope, so you can peer into the original 360 scene using the phone’s display as a viewfinder.

Then you move the material around on your phone until you find the view you want to turn into a fixed-frame video. A weird as this sounds it’s like standing in the present moment while filming a past experience, if that makes any sense! 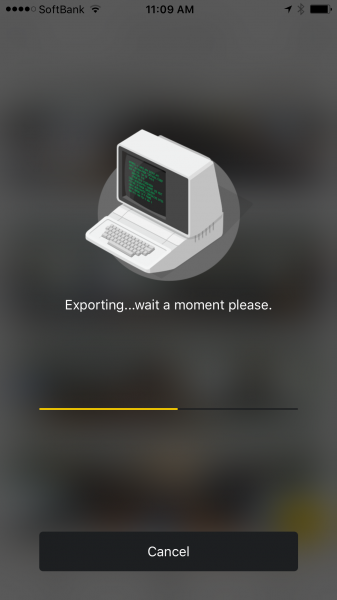 Insta360 claim that this editing technique has never been achievable on a phone, and it allows anybody – from a journalist to an outdoor adventurer – to effectively act as their own camera crew.

FreeCapture also allows users to seamlessly shift from standard perspectives to the unique shots that are only possible with 360 cameras, such as “tiny planet” and “rabbit hole” effects.


Advanced stabilisation makes possible the all-new bullet time mode. Using only a selfie stick or a length of string, creators can capture up to 240 FPS slow-motion shots (it’s basically interpolated 120p vision) where the ONE circles them dramatically, always keeping them in center frame while the string or stick used to spin the camera gets concealed. 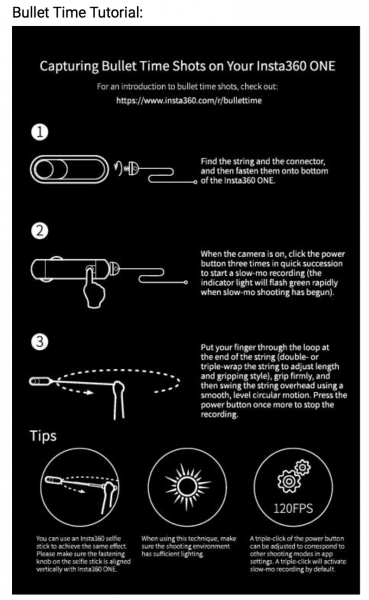 The ONE shoots at a maximum speed of 120 FPS, while 240 FPS video is achieved algorithmically with the companion app.

Another new feature is called SmartTrack, that lets users automatically capture a centered 1080p fixed-frame video on whatever subject you choose. It means users can first capture everything, and then let the ONE give them a ready-to-share, classic-sized video that keeps the spotlight on their key subject.

In a neat little trick, the ONE is able to automatically erase the selfie stick from your footage. Once the stick’s out of the picture, the ONE works like a flying camera – capturing 360 views from an overhead angle. 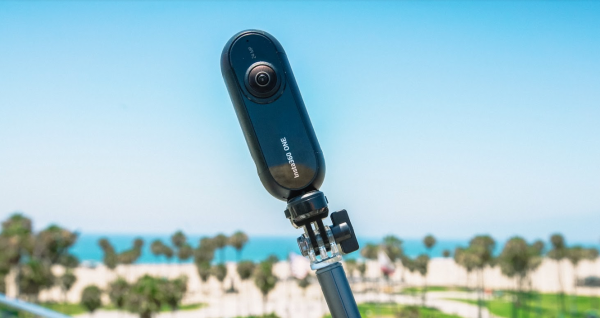 The ONE features a built-in socket for standard 1/4“-20 screws, and with its small size and weight it can be mounted on helmets, drones, cars, tripods and just about anything else. It would be very interesting to see what the footage looks like from using this on a small drone like the DJI Mavic Pro.

If you want to take the ONE underwater you can with the addition of an optional IP68 waterproof housing that is effective at up to 30-meter (98.4 feet) depths.

A purpose-built selfie stick and Bluetooth remote control will also be available for purchase to let users easily achieve the bullet-time effect and other “flying camera” shots, however, an included string attachment will make the effect achievable straight out of the box. 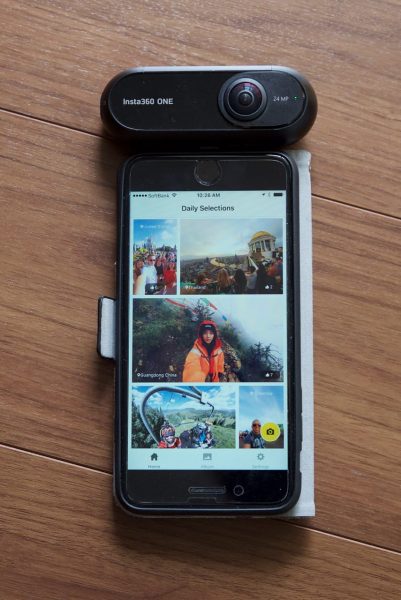 The ONE offers an HDR (high dynamic range) shooting mode and supports taking still pictures in RAW format and videos in a Log format. Just how well the Log recordings grade up would be interesting to see.

It also shoots timelapse 360 video, and there are a bunch of manual controls for exposure, ISO, shutter speed, and white balance.

Insta360 ONE: price and availability

The Insta360 ONE is available to buy now at https://mall.insta360.com/ and via authorized dealers such as Amazon and B&H. The cameras will start shipping on 5 September.

The US retail price of an Insta360 ONE, which includes a camera, two-in-one case, camera stand, MicroSD card, Micro-USB cable, lens cloth, and a string attachment to achieve the bullet-time effect is $299.90 US.

It’s hard to predict how this product will go down with consumers. People have become so used to capturing video and photos from their phones they may not want to carry around another device with them. For filmmakers the Insta360 ONE is quite intriguing. It certainly looks like you could use it in place of a traditional action camera, but I’m skeptical as to whether the quality will be up to the task. Whether the versatility of being being able to pull multiple spherical video frames all from just one camera outweighs the image quality concerns I have is something we will have to see

Newsshooter will have a full review of the Insta360 ONE once the firmware is no longer in beta, and we get enough time to test it properly.

What do you think about the Insta360 ONE? Would you buy one? Do you think it could be used in place of an action camera? Let us know in the comments below.