With only a few days left before I leave to IBC in Amsterdam Atomos contacted me and asked if I would like to get my hands on the new Ninja V. I, of course, said yes! They sent a preproduction Ninja V to check out.

I first saw the 5″ HDMI monitor/recorder at NAB 2018 and was impressed with the design, however, the Ninja V wasn’t ready for prime time yet as Atomos didn’t power it up for us to see the 1000 nit screen and new user interface. Well, today I have my hands on a working Ninja V. Since it’s still in beta software some of the icons will look different but for the most part the layout of the menu and interface is what you see here. 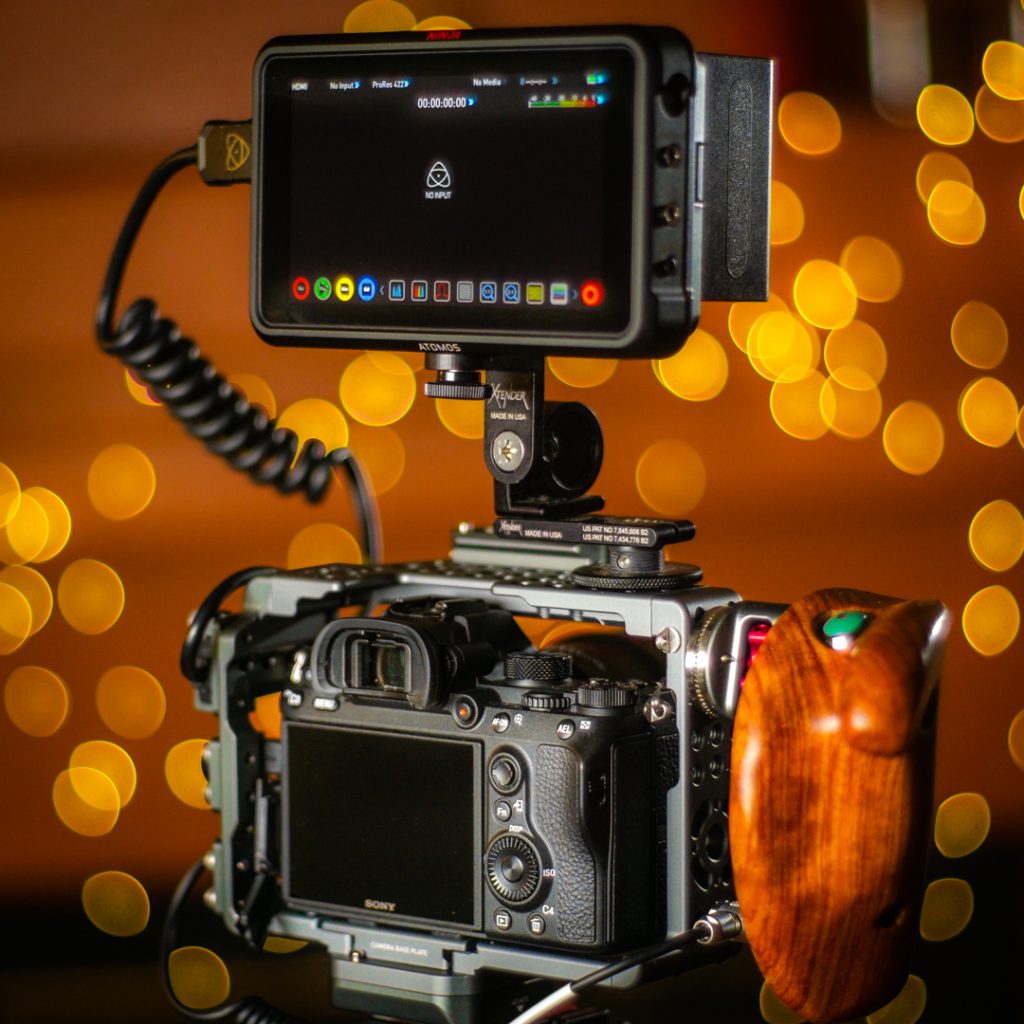 The 5″ size is nice for on-camera mounting and gimbal rigs. While I enjoy the larger 7″ screens they can be a beast on a small camera setup with a Sony a7 or GH5. With the new 10bit output that the Canon EOS R, Nikon Z & Fuji X-T3 cameras have, the Ninja V is a perfect fit. Heck even an EVA 1 and FS5 would work well with this setup as a monitor and recorder. Sure would be nice to have SDI in right? Well, maybe that’s possible.

The Aluminum alloy chassis and ABS polycarbonate back plate feel much more solid than other Atomos recorders without feeling too heavy. This is a nice improvement in overall build quality. The Ninja V is an HDMI recorder monitor however it has a few tricks up its sleeve. 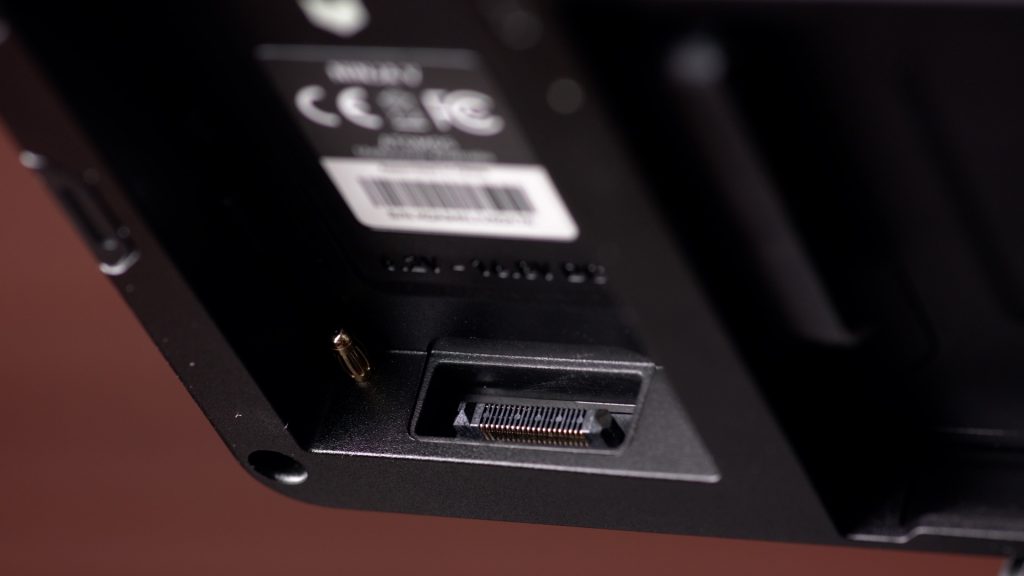 This AtomXpand data port under the battery compartment is capable of interfacing bi-directionally with different devices. The port supports up to 4K 60p and 12-channels digital 24-bit 96KHz audio. High on my wishlist for the AtomXpand port is an SDI add-on. With SDI in the Ninja V could be compatible with higher-end cameras that also offer ProRes RAW. The Ninja V doesn’t have this now since no camera can send a RAW signal through HDMI 2.0 and I really don’t expect to see this in the near future however with an SDI add-on attached and a possible ProRes RAW license added it could unleash a small ProRes RAW recording beast. Another option for the data port is wireless connectivity. The options are vast and Atomos alongside other companies is looking into many potential devices that could take advantage of this special AtomXpand port.

The Ninja V will have a new sleeker media option with the AtomX SSDmini. These drives will be available from Angelbird and Sony. The AtomX SSDmini will fit perfectly in the media slot to keep the smaller Ninja V nice and compact. In a pinch, the original Atomos caddy works as well but it will extend out from the side of the recorders frame. The drives are only 7mm high and 80mm long and retain the same SATA III connector as traditional SSDs plus they are backward compatible with the Ninja, Shogun and Sumo devices. 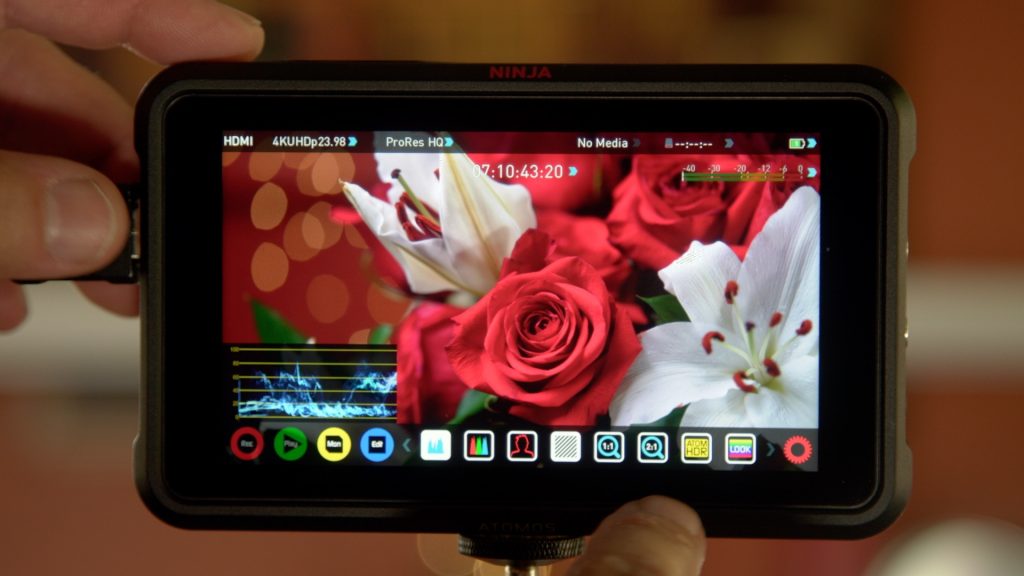 The new AtomOS on the Ninja V is easy to use and doesn’t take up a lot of real estate on the screen. I like it. It’s simple and quick to navigate with minimal menu trees to navigate to access the tools to turn them on and off, however, Atomos told me the software isn’t finalized and it’s very possible that what you see now could change. Again I like the direction Atomos took and if they can make it even better than go for it!

As for tools you have the full selection Atomos offers on other models. To access all the options a simple tap on the yellow MON icon lets you scroll side to side revealing every tool available. To change how a tool works you tap on the sprocket icon on the far right. The menu icons could change with the final version of the firmware.

The popular ATOM HDR feature as well as viewing LUTS for log gammas are also available with the Ninja V. 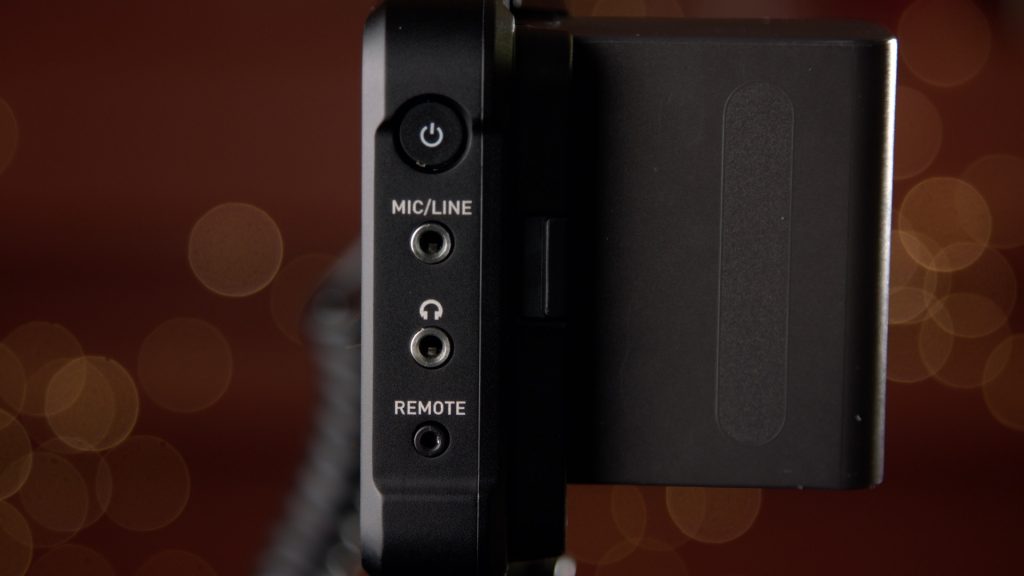 On the side, you have a power button, Mic/Line audio input, a 3.5mm headphone jack, and remote jack. 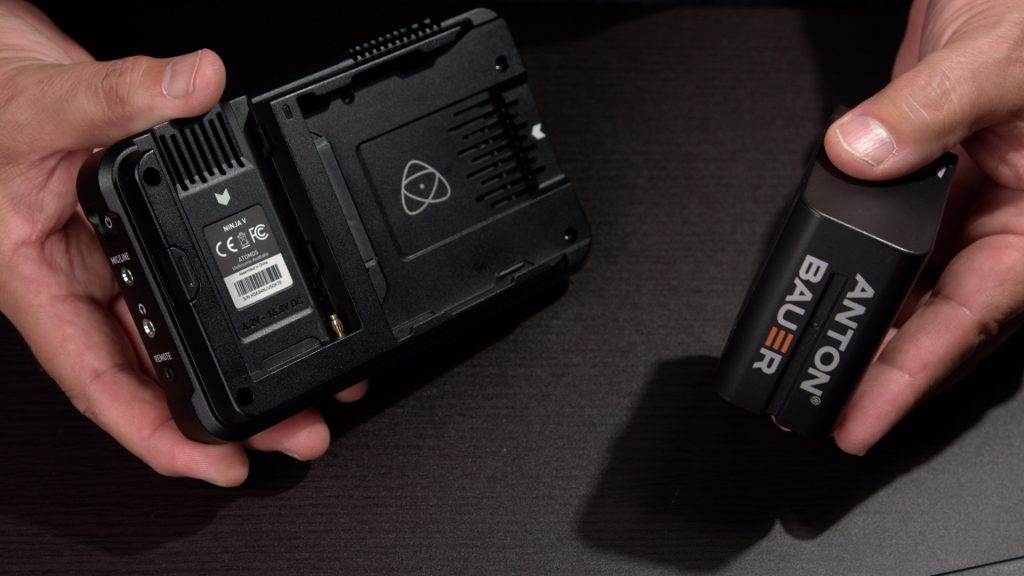 For power, it uses a single Sony NP type battery that locks into place and is released with a button for a secure fit. I tested the Ninja V with an Anton Bauer NP-F976 7.2V 6600 mAh battery, I got a constant record time of three hours. The Ninja V outlasted the Sony a7 III battery by 10-minutes. Not bad. With three batteries you can shoot for nine hours. I did have the monitors brightness set to 50% so if you crank it up for daylight use it will be less. The Shogun Flame gets approximately 1.5 hours with the same battery so twice the runtime is a good thing. 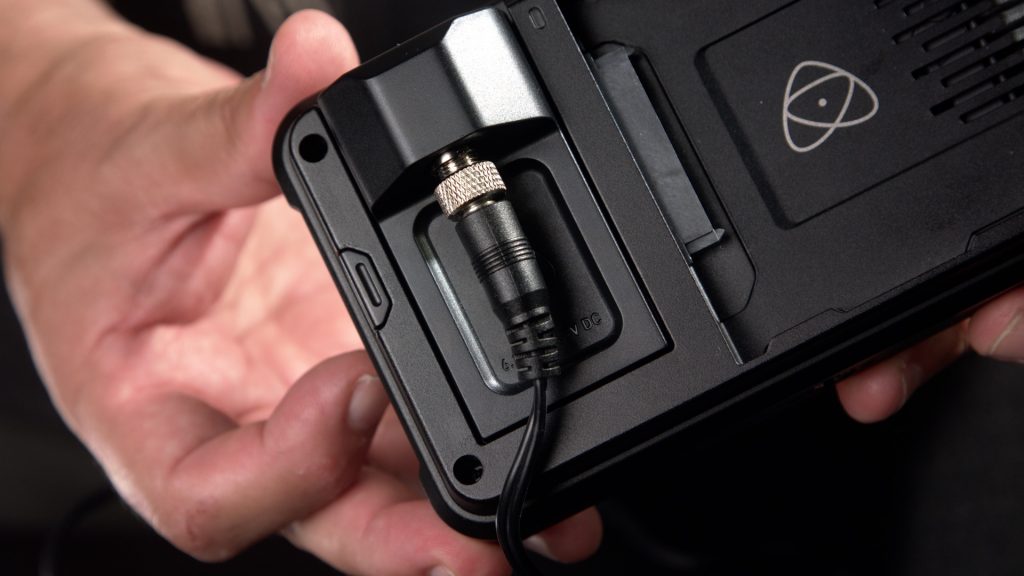 Included is an AC adapter that is a built into a dummy battery. The connection is solid with the locking connector. 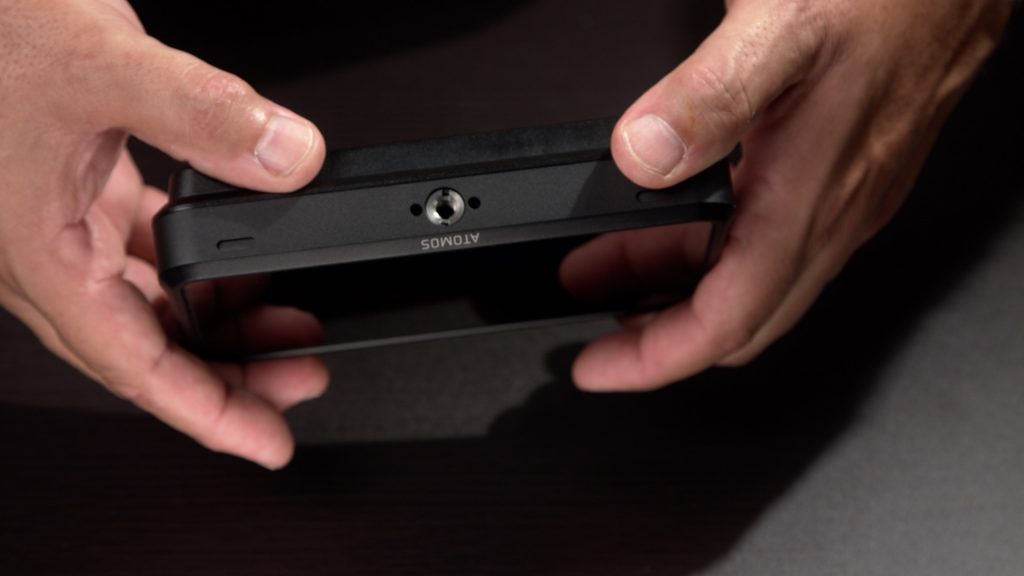 Sometimes it’s the small stuff that makes a product enjoyable to use and one feature I like a lot is the use of the ARRI 2-pin 3/8″ accessory mount. You have two options. One on top and bottom. 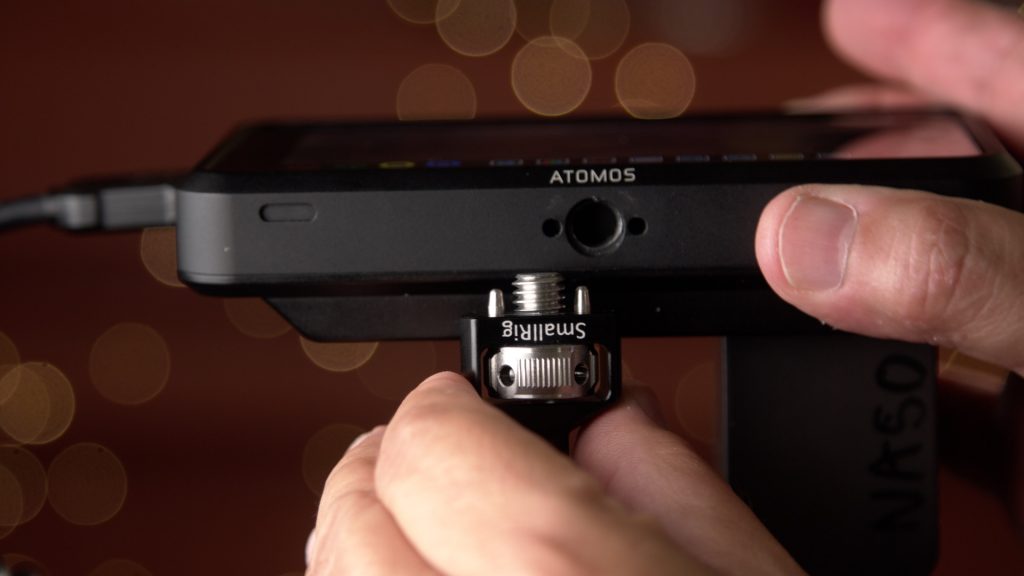 The ARRI accessory mount is a simple but effective design that has a pin on each side of the 3/8″ screw that prevents devices mounted on it from twisting. A common problem with most 1/4 20″ mounts. You have to really tighten them down to prevent twisting or coming loose. The Ninja V has a 1/4″-20 reducer in the 3/8″ thread so you can use either. Very cool. Hopefully, my favorite monitor mount by Xtender will have a version for their 2-shot friction mount. Shape, SmallRig, Bright Tangerine and Wooden Camera have arms and clamps with the Arri accessory mount as well. Lots of options for solid mounting.

While Atomos states in the specifications that the monitor is 10 bit the screen display on the Ninja V is not a “true” 10-bit display. It is actually 8+2 FRC. 8+2 FRC (Temporal Dithering) is a way of turning the 16.7 million colors from an 8-bit panel into the 1.07 billion colors that a true native 10-bit panel can display. 8+2 FRC uses various algorithms that flash 2 color tones very rapidly, thus giving the perceived impression of a third color that really isn’t there. This may sound like some sort of sneaky parlor trick, but almost all of the major panel manufacturers are now doing this. Atomos, SmallHD, Flanders, and even your 5K iMac display are all 8+2 FRC displays.  8+2 FRC panels are considerably cheaper to manufacturer than a true native 10-bit display.
The good news here is in reality, 8+2 FRC panels are almost impossible to distinguish from true 10-bit native panels. The only small difference is when it comes to viewing material that was shot in low light conditions at higher ISO values. On an 8+2 FRC display, the image will appear to show more noise than what an actual native 10-bit display will.

The IPS screen is very nice. Colors look accurate out of the box. I did lower the brightness to 50% from 100% as it was way too bright for indoor use. Monitors that are viewable in full sun are huge for me. I do shoot a lot outside in sunny San Diego and having a monitor for a producer, makeup artist or director on set to see what the image looks like is important. My go to has been a SmallHD 702 Bright ($1499 US) and while the color isn’t all that good it works very well in bright conditions. The 702 Bright is also 1000 nits. The Ninaj V has a touchscreen so no menu buttons to navigate settings. These touch panels have come a long way as the quality on them in the past wasn’t very good. This is not the case with the Ninja V. The image is crisp. When using the 2X zoom feature the pixels don’t look soft making focusing easy.

Since the Ninja V isn’t a one trick pony you have several options for quality codecs such as Apple ProRes and Avid DNxHD in several flavors. This is good timing for the Ninja V with the release of new mirrorless cameras like the Canon EOS R, Nikon Z6, and Fujifilm X-T3 which all have 10-bit out via HDMI. 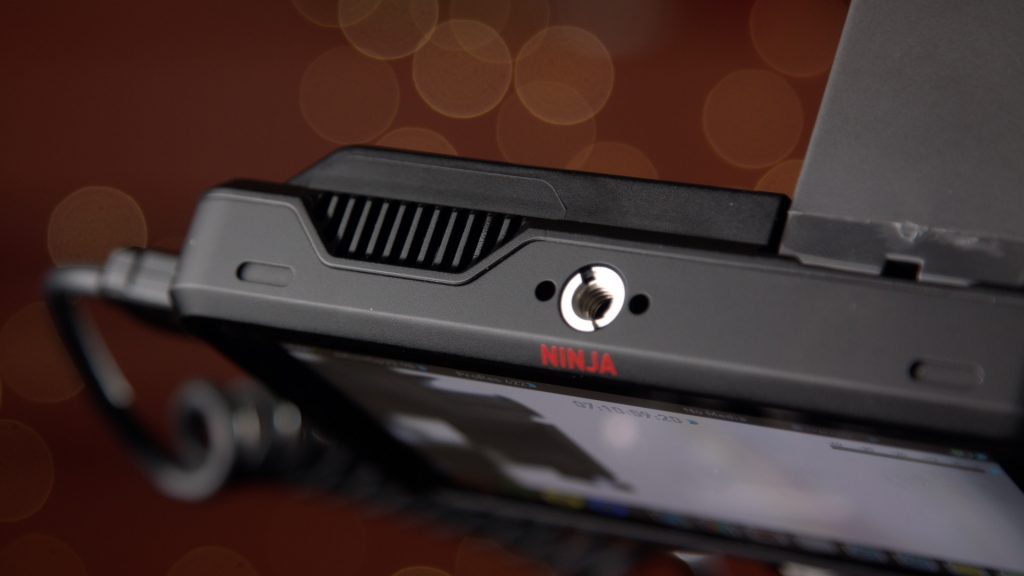 To keep it cool the Ninja V has a fan and two vents on the back. The main exhaust is on top where you can feel the heat escaping. On the back where the SSD is installed is another as well as the battery slot area. 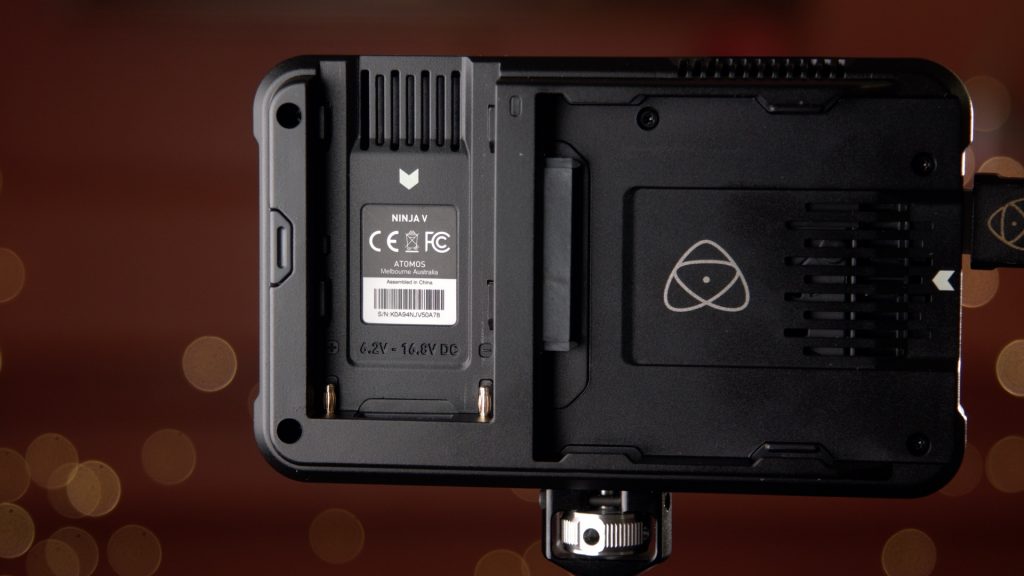 When the Ninja V is powered up the fan runs high for a few seconds and winds down. With my own ears, I can hear it from several feet away in a quiet room after it has been recording for some time and working hard so this could be an issue depending on the microphones used and the ambient sound on location. When used as a monitor I found the fan to not be an issue at all. I did ask Atomos about the fan noise and they are aware of it. Since the software isn’t finalized yet they feel confident that it can be tweaked for better performance.

The Ninja V is a well thought out monitor recorder from Atomos. It ticks a lot of boxes for me and at $695 USD you get a lot for your money. When compared to a lower end SmallHD Focus at $499 USD for the monitor only it sure is a very competitively priced option plus you get a recorder alongside a 1000 nit monitor. Speaking of the 1000 nit IPS screen it looks very nice and it’s very usable outside in the sun and will outperform any onboard LCD screen. The 5″ size is a plus for smaller cameras setups and adding the Ninja V to a gimbal rig is a good option due to its size and weight. The AtomXpand data port adds some interesting soon to be available options making the Ninja V potentially expandable to be used with SDI cameras and devices like wireless video receivers. One thing I worry about is the fan noise. When the recorder got hot the fan kicked up. This has been an issue with other Atomos recorders and while it’s not as loud as the Shogun Flame it could an issue in situations where the camera is close to the recorded audio source.

All in all, Atomos has an interesting product in the Ninja V that could fill the needs of several types of users and I will be getting one for my kit when they start shipping at the end of September early October.