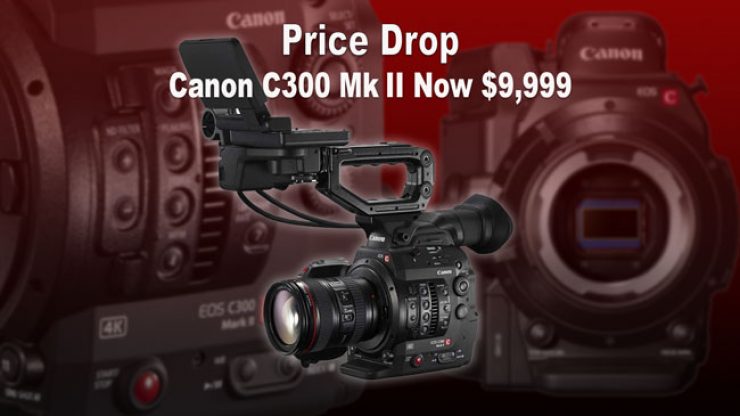 We reported last year some dealers around the world have struggled to sell stock.  The C300 Mk II hasn’t made as much of an impact as the C300 Mk I did. It dominated the broadcast and production markets – I still use one for local broadcast. Today we have a lot of options making the S35 space more competitive.Traditionally Canon’s cameras are priced higher than the competition, and Sony with the FS7 has been a big hit with former Canon shooters that wanted more features and options at the same, and later lower, price point.

What does this mean?

Probably nothing really. As cameras age they go down in price gradually.The C300 Mk II was introduced early April 2015. Two years isn’t that old but the market is moving fast. You know there’s always another camera ready to go, and you can bet a new C300 Mk III is around a corner. We’re just not sure what corner yet, or if it will take the form of the C700 body but with less functionality.

With the release of the C200, Canon is sure to add some of those features like the touchscreen and internal RAW recording to the new model. However when an upgraded C300 Mk III will arrive is a waiting game. For now the Mk II looks like it’s priced to compete with the Sony PXW-FS7M2 at $8,999 US. The FS7 Mk I is now $7,499 US, the same price as the C200. Lots of options including the Panasonic AU-EVA1 coming this fall for under $8,000 US (body only).

So you might be thinking getting a C300 Mk II now looks like a better option than the new C200 at $7,499 US and I think you might be onto something here. For $2,500 US more you get a much better codec and more framerate options – but no touchscreen for DPAF or the new audio inputs on the body. We don’t know exactly what the XF-AVC codec will be yet for the C200, but I doubt it will be 10-bit. More likely to be 8bit 4:2:0 with a higher bit rate. I hope I’m wrong. Also to get the C200 to be a higher-end camera you would need an external recorder and media to go with it plus batteries. That alone would put the C300 Mk II at its new price ahead since no recorder is needed for a broadcast-ready codec.

If you’re in the market you now have to take into account the new pricing and getting the most for your hard earned cash. Is the price drop on the C300 Mk II enough for you to pull the trigger? Let’s talk in the comments section below.