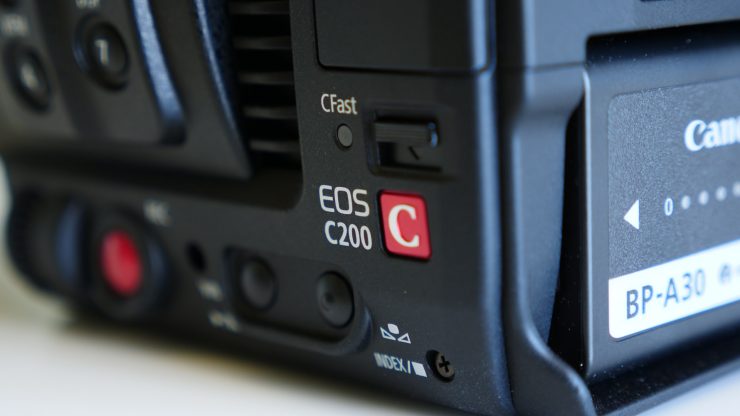 The Canon C200 is a new addition to the company’s Cinema EOS range of cameras. At a briefing last week Canon were adamant that it’s not a replacement for the C100 MkII, rather an upgrade path for C100 users who want more from their camera; and a potential B or C cam for C300 MkII and C700 users.

The EOS C200 integrates an 8.85 Megapixel Super 35mm 16:9 CMOS sensor that supports 4K (DCI) recording with a maximum resolution of 4096 x 2160 pixels. Canon told us at the C200 uses the same sensor from the C700 and includes C-Log and C-Log 3 profiles to ensure it’s as easy as possible to match footage from other C-series cameras. Yes, Canon are apparently putting the sensor from their flagship, very expensive Super 35 camera into a more budget-friendly model. It seemed so unlikely I thought I’d made a mistake in my notes but I’ve since double checked and Canon have confirmed. At this stage I will have to take their word on it, but the specifications sheet Canon sent out states that the camera uses a 9.84MP 4206×2340 (total pixels per sensor) Super 35-sized sensor and the Dual DIGIC DV6 image processor. On paper this is the size of the sensor that is found in the C300 Mark II, and is slightly smaller than the 11.54MP 4622 x 2496 (total pixels per sensor) found in the C700. The camera uses the image data delivered by this 4K CMOS sensor to also enable over sampling HD Processing for 2K (DCI) and Full HD 1080/60p recording.

Each pixel in this CMOS imaging sensor also maintains a wide pixel pitch to maximise the amount of light that falls on to each photo site, which Canon claims should enhance the EOS C200’s sensitivity while also minimizing noise and supporting ISO speeds of up to 102,400. According to Canon the sensor also reduces data-readout time, which should result in a reduction in rolling-shutter artifacts.

In the hand the C200 feels substantial and is closer in size and weight to the C300 MkII than the C100 MkII. There are a few changes though, and mostly for the better. The handle is much improved over both previous models, and features a double locking mechanism: one quick release and an extra bolt you can tighten with an allen key. The C200 I picked up was only secured via the quick release and it felt rock solid. Not a feeling I’ve ever had using the stock C300 MkI handle.

The clamshell from the C300 Mk II is gone, the monitor is new, and is now a fully adjustable and detachable, 1.23 million dot, 4-inch touch screen LCD Monitor that works with Canon’s Dual Pixel AF. The nice part about the new screen is that it enables one-finger “tap-focusing” during shooting. It seemed responsive and accurate in the very short time I had to try it out. It also seemed nice and sharp, though I wasn’t able to take it outside to see how viewable it was in sunshine.

A newly developed menu function has been added for Auto-Focus tuning, allowing easy access to camera and lens settings. The AF Speed Tuning function allows users to set the lens drive speed to any of 10 steps. AF subject tracking characteristics can also be varied and set to any of 7 steps, allowing the user to select the appropriate responsiveness when changes have occurred in the subject.

The C200 uses an internal, motorized ND assembly consisting of two rotating disks with glass ND filters between the rear of the lens and the front of the sensor. This combination of ND filters allows 5 steps of neutral density. In normal mode 2, 4 and 6 stops are available. In extended mode, 8 and 10 stops are also available. These are the same that are found in the C300 Mark II and are increased over the Clear, 2, 4, and 6 stop filters available on the C300 Mark I. This increase in the maximum amount of ND you can use will be beneficial for those shooters wanting to shoot at a very shallow depth of field even in bright, sunny conditions.

The monitor is connected via the same cable as is used on the C300 Mk II, and – frabjous day – only one cable is needed as XLR audio inputs have been moved to the camera body. We can’t have everything of course so they are in a slightly odd angled configuration at the back of the camera, but it’s a welcome change and one that suggests Canon has listened to criticisms of the earlier Cinema EOS models.

The C200 is compatible with the C700’s V70 EVF, although if you do go down that route you’ll be spending an alarming proportion of the cost of the camera body on the EVF itself. However to each their own, and Canon say they are consciously trying to create an ecosystem of cross-compatible cameras and accessories. As part of that aim the C200 also uses the same batteries as the C300 Mk II.

A small thing, but the control grip is now attached via a standard Arri-style rosette, making it much easier to relocate via third party accessories.

The C200 also introduces a new recording format: Canon Cinema RAW Light. Cinema RAW Light files are about 1/3 or 1/5 the size of Canon’s standard RAW files. The smaller file size and reduced bit rate speeds up data transfer and allows internal recording to CFast™ cards. Canon claim it will offer the “same flexibility in colour grading as Cinema RAW in a smaller file size.” Using it will make the most of the sensor’s dynamic range (a claimed 15 stops) but will be recordable internally. Using this mode means writing to a CFast 2.0 card and will allow 10bit (60fps) or 12bit (30fps) 4K DCI recording at a data rate of 1Gbps. 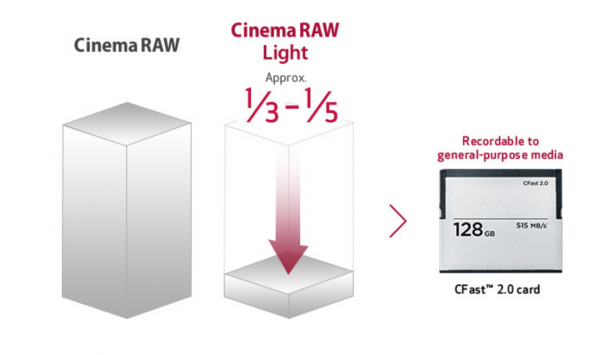 Canon say that from their testing they’ve been getting around 15 minutes of record time from a 128GB CFast 2.0 card. You can also record 2K proxies to the internal SD card slots at the same time.

Having the ability to record RAW (even if it is light version) internally without having to go to an external recorder is impressive for a camera at this price point. This is also going to be welcome news for those shooters who want to use the C200 on a gimbal or keep their camera size to a minimum.

But will it cut?

At launch the only confirmed NLE to definitely support Canon Cinema RAW Light natively will be Blackmagic’s Davinci Resolve. Cinema RAW Light files can be transcoded to other commonly used file formats, such as DPX or ProRes for later editing and online delivery using Canon’s CRD software. You’ll also be able to edit it in AVID, by using the Canon RAW plugin for AVID Media Access. Canon have also been working with Adobe and Apple. Apple have committed to supporting the codec ‘In a future version’ of FCP X. Edius have also said they will be adding support for the format during 2017.

And if you’d rather roll your own footage, Canon’s own Cinema RAW Development app will be updated so you can transcode to an edit ready format like ProRes yourself.

At launch the other means of recording available will be regular old MP4, with a claimed dynamic range of 13 stops. This will record UHD 4K at a data rate of 150Mbps, and HD at 35Mbps. Those weren’t figures high enough to set my pulse pounding but Canon justify them as a compromise worth making. Keeping the data rate lower allows the use of cheaper, widely available SD-card media for users who aren’t shooting for ‘film’ and who want it to fit in with an existing workflow. Mirror recording of 4K UHD/Full HD MP4 image files to the camera’s two SD slots is also possible, so you can choose not to make additional copies of the data after recording if need be.

Colour depth is limited to 4:2:0 when recording MP4 files to the internal SD cards, although 4:2:2 is apparently output over SDI on a clean feed for external recording. Canon say that they like the MP4 format as it’s playable by a multitude of devices, and that in a world full of 8bit colour screens it makes sense to shoot in 8bit as well. 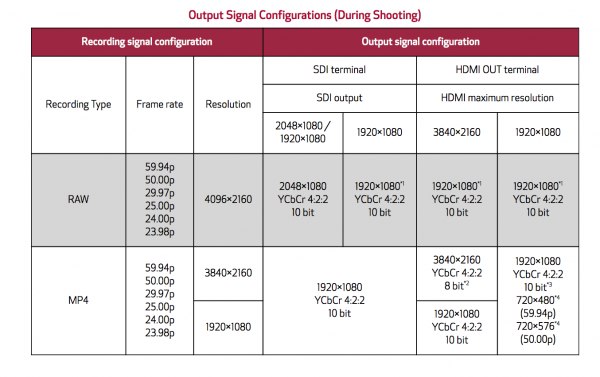 Above you can a list of the available output configurations when recording on the C200.

Bluntly though, it’s surprising to have such low data rates in a new camera released in 2017. The Sony F3 that was announced way back in 2010 was widely criticised for only having internal 4:2:0 35Mbps recording, and now Canon is doing the same thing seven years later. Upgrading from a C300 Mk I for example, you’d lose the ability to record 50Mbps HD internally, which seems like a real missed opportunity that could rule out the C200 for broadcast use.

At the time of writing we’ve not seen any vision from the camera though – and for me Canon have managed to wring the most out of the bitrates in their other Cinema EOS cameras, especially if you’re able to get the picture how you want it in camera. So I’m not going to set the internet aflame with my indignation just yet.

Interestingly, Canon also plan to add the XF-AVC codec from the C300 MkII at a later date – currently planned for the first half of 2018. Apparently the delay is due to the complexity of re-engineering a 10bit codec to play nicely in 8bit. So possibly it’s not going to offer a dramatic increase in quality of footage when it arrives. But there is a roadmap, it’s planned as a free update, and once implemented it means footage from the C200 should fit nicely within a C300 Mk II workflow.

4K shooting tops out at 60p: if you’re after true 4K slowmo Canon will happily point you in the direction of the C700. Good news for HD shooters though, as the C200 will record continuous 120p footage without a crop at 1920×1080. 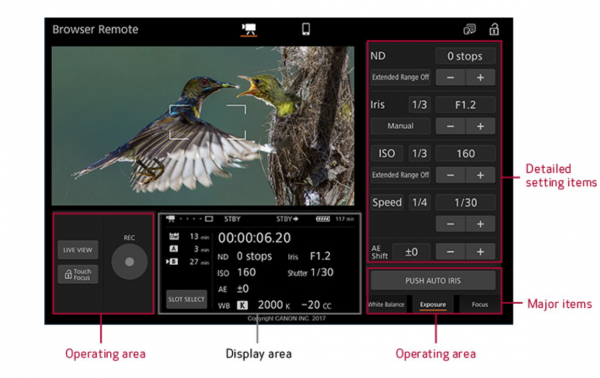 Multiple camera operations can be performed on the EOS C200 and EOS C200B from a connected device (such as a pc, tablet or iPhone) by accessing the Browser Remote with a general-purpose browser. A wide range of auto focus functions can also be controlled using the Browser Remote, including the ability to move the focus area with just a touch when using a tablet or iPhone.

The C200 will be priced at around £7,699 in the UK or $7,499 US in the States and is slated for release in July. It fills a hole in the Canon Cinema EOS lineup between the entry-level C100 MkII and what Canon are positioning as the more broadcast ready C300 MkII.

The C200 feels solid in the hand and the form factor at least seems to be the result of listening to what customers say they have been wanting. The same can be said of the framerates – 4K 60p and HD 120fps, from Canon, in an affordable package! And the appeal of a native EF mount with no adapters necessary shouldn’t be underestimated. But there’s always a but – and it feels like Canon are going to have to work hard to persuade buyers that their recording formats and bitrates can live up to the promise of the hardware.

Let us know what you think below, and if there’s anything else you’d like to know about the Canon C200. Erik is lining up an interview at Cine Gear so if we can’t answer now, we should be able to as the show gets underway.