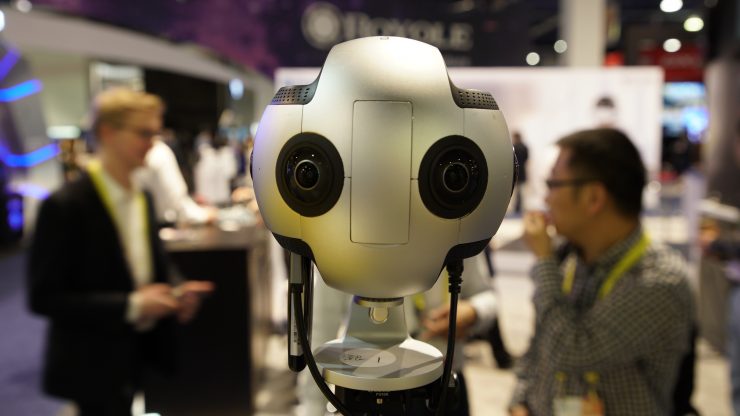 The much anticipated Insta360 Pro will be at NAB 2017—and, hopefully, available soon after.

The camera, which records 8K 360 video, 6K 3D 360 video and 4K 360 video with realtime stitching or live streaming (either monoscopic or stereoscopic), was announced in January of this year at CES. The camera is comprised of six f/2.4 lenses studded in a spherical housing that feed a processor that supports Raw and HDR recording in both h.264 and h.265 codecs.

The announcement that it would be available sometime in Q1—an ambitious time frame—led to much anticipation and a healthy dose of skepticism from the industry. Although Q1 2017 has come and gone, its physical presence at NAB is hopefully a sign that it will be available in the near future.

Insta360, which also makes the Insta360 Nano and Air 360 cameras for iPhone and Android devices, also announced that the estimated price would increase from $2,999 to $3,499.

There are downloadable samples of what the camera is capable of on the Insta360 website – so it’s definitely a product with working prototypes at least. But clearly shipping an 8K-capable VR-ready camera isn’t as straightforward as perhaps Insta360 had hoped.

Integrated acqusition solutions have to be the future for the nascent VR industry: Google and Facebook have the engineering prowess to custom build their own multi-camera rigs, but wrangling data and stitching footage from many separate devices is unappealing to producers looking to try out VR production for the first time.

I’ll be at NAB this year checking out the latest happenings in the world of VR, and hopefully we’ll be able to bring you more news and maybe even some hands-on time with the Insta360 Pro then. Until then, for more information visit the Insta360 website, and stay tuned here.