This week I’ve seen the future of run-and-gun shooting, and it’s autofocus. Finally I feel that the manual focusing skills that I’ve been developing for 35 years have met their match – instilling in me both dread and excitement in pretty much equal measure. To add insult to injury, I wasn’t beaten by a cinema camera costing thousands of dollars, but the tiny Sony a6500.

I’ve discussed AF for video on Newsshooter many times before. When the Canon C300 mkII came out I shot a short video only using autofocus. The speed and accuracy of Canon Dual Pixel CMOS AF was impressive and several shooters I know now use it daily. But there were many situations where you were still better off focusing by hand. Toggling between subjects on the C300 mkII isn’t the easiest thing to do and can result in missed shots and occasionally unnatural-looking focus transitions. Part of the solution to this is to combine phase detection or Dual Pixel AF technology with a touch screen. Canon have this on their 1DX II and 5D mkIV DSLRs and it works very well.

The Sony a6300 brought phase detect AF to their smaller cameras. I own and use one of these. The autofocus is very good, but doesn’t have an intuitive way to select your focus point. Used wisely the AF system can get some great results though, as our testing showed.

But Sony and Canon have now gone one step further on their latest mirrorless models, the a6500 and M5. Both companies have enabled the use of the rear screen as a touch pad to control focus when you are viewing through the built-in electronic viewfinder (yes, you could also do this with the Panasonic GH4, but the AF system just wasn’t in the same league). Having it work through the viewfinder is what you need if you’re going to shoot run-and-gun, especially in bright light condition.

It’s the 4K-shooting Sony a6500 that we’ll be looking at in more detail here. Hopefully we can also test Canon’s M5 soon.

In a nutshell, the a6500 allows you to control autofocus in a much more natural way than before thanks to touch AF. It is also incredibly accurate and the tracking system is excellent. It does, however, require careful configuration for best results. The operator still needs to learn what setting to use and making it work to full effect takes some getting used to.

To do this you’ll need one of Sony’s newer E-mount lenses (some older ones don’t seem to offer all the functions). Some work better than others and I recommend you try any lens you intend to buy first. The bad news is that adapted lenses don’t work with the phase detect system in video mode. If you were hoping your EF lenses would offer fast and accurate touch AF, then you are out of luck.

To get touch AF working you need to set the camera in one of two focus modes; the more precise Flexible Spot, or the slightly larger expanded Flexible Spot. The former is more precise, while the latter is generally better for faster moving objects that might otherwise get away from you as you swipe or touch. I used both the smaller and expanded spots in equal measure. 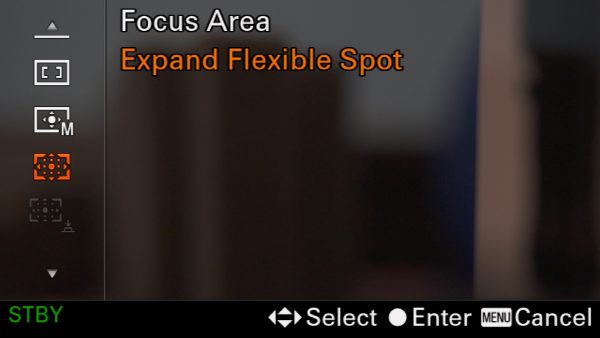 When using the rear screen you simply tap on the area that you want to select and the camera rapidly brings it into focus. When using the electronic viewfinder (EVF) you touch and then drag the focus point around the screen to bring whatever you want into focus. It all feels a lot like playing a computer game – something that younger operators will feel right at home with.

There are some subjects where even the smaller target isn’t precise enough, though. The clip below shows how the a6500 struggled pulling focus from some tree branches to the building behind.

It completely failed to get this shot and if you have a subject like this you should fall back to manual focus. Luckily, Sony have made this relatively easy to do. You can assign one of the custom buttons to have the lens switch between AF and manual focus at will. Unlike the Olympus OMD EM-1 II I am currently testing, you can still toggle between these while recording too. Another nice touch is that if you have peaking set up it will automatically come on when you switch into manual focus. This way you have a very clear indication of which focus mode you are in at all times. Looks like there are still some uses for my manual focussing skills – for this generation of cameras at least.

There is also an option to choose a subject by touch, then let the camera track that subject around unaided by you. This might sound ideal, but this lock-on AF system doesn’t always stay locked on. If the lock-on AF does lose your subject you can reacquire it with another touch. You can also cancel the lock-on and select a new subject at any time. The problem is that in this mode you lose the ability to direct the focus with your finger after the initial selection. This is something I would like to see improved. For now, I find that tracking the subject using touch is a better option for anything more complicated than a single subject that doesn’t move around too much. 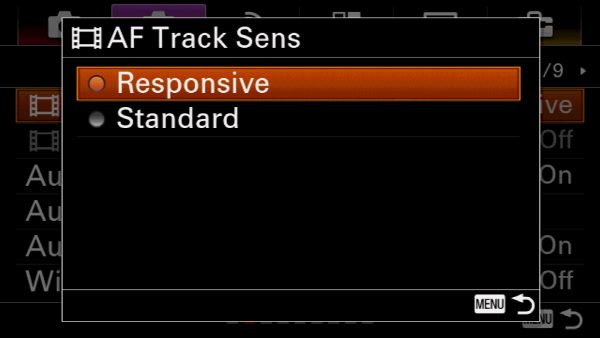 Most of the skate park video is shot with the faster settings and as you can see the camera does an amazing job of tracking fast-moving subjects. A lot of the shots were at f1.4 using the lovely Sony/Zeiss 35mm lens. I could never have focused the shots where skaters come towards me at speed with the same accuracy as the a6500. I think even the best focus puller would struggle to have the same success rate as the Sony did at f1.4. 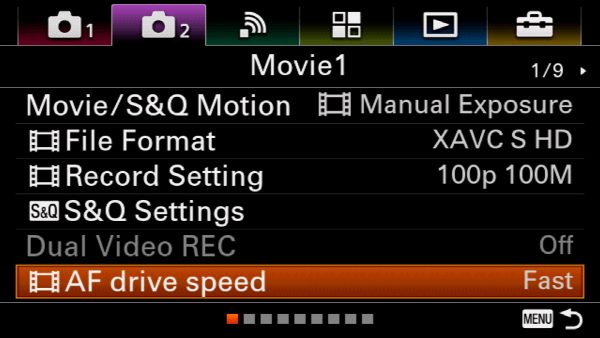 While the system is good, it isn’t perfect. When using the EVF the position of the AF target is all relative to your swipe and not a fixed point on the screen. If you start swiping too close to the top of the screen then you can run out of screen real estate to swipe before the cursor reaches the top of the image. This can be very annoying. There were several times where I ended up cursing the camera. 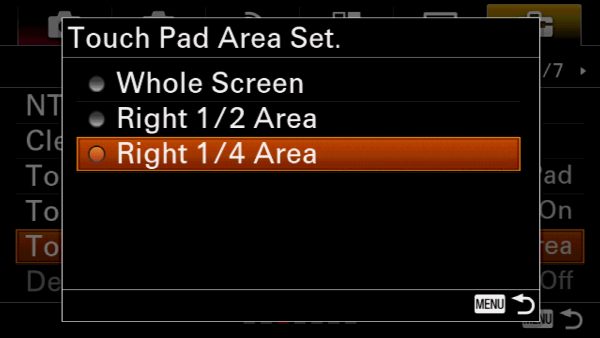 When setting up you have the option to have the whole screen, half the screen, or just the right quarter of the screen as the active swipe area. I found that using the whole screen area meant you ended up not being able to get to the top left part easily as your finger ended up practically up your nose. The better option was to use half the screen. This was a good compromise between running out of screen to swipe and not hitting your face with your fingers. I’m sure that different users with differently shaped faces will have different preferences – which is presumably why Sony have the three options on the camera.

I would much prefer to have the option to set the touch AF to be in absolute positions on the rear screen when using the EVF – I believe this is what Canon do on the M5, although I need to verify this. Maybe Sony can add this in firmware if they are listening.

The a6500 does make mistakes when focusing, but more often than not they are the result of operator error rather than the camera’s brain. You still get the occasional moment where it hesitates and the image judders as the lens shuttles back and forth. The majority of errors somehow seem to be quite natural though, and not unlike how human focus errors appear. I think the way these errors look is almost as important as how well the tracking works – it’s all part of the illusion that a real person is actually focusing the camera. Sadly, the odd really bad error does give the game away. I think this is what Sony, and all the makers, need to focus their attention on most. For anything live I think this is still a deal breaker. For longer form stuff that is edited it is much less so. The frequency of these errors, once you are used to the system, would probably be the same as the number of bad manual focus mistakes the average shooter would make.

Engaging the touch or swipe feature requires a light press of the screen in normal conditions, after which it stays engaged for as long as you swipe. After a few seconds inactivity it then disengages the touch and remains focused on where you took your finger off the screen. For whatever reason it seemed to be harder to engage while outside shooting the skate park video in cold conditions (just how the girl in the video kept warm in her t-shirt I have no idea). Sometime I ended up giving the screen a firm press by mistake which would wobble the camera. I asked Sony about this and it may be to do with having excessively dry hands in the cold. Unlike some other touch screen devices the a6500 can’t be calibrated by the user so there is no obvious solution to this. Again, for now, the obvious solution if you encounter problems is to fall back to manual focus.

Another odd issue is that the camera won’t let you output an image with the info displayed if you are recording 4K. It would be nice to be able to use the touchscreen at the same time as seeing where you are focusing on a bigger monitor, but you can’t. I suspect this is to prevent accidental recording of overlays when using an external recorder.

So how else could this system be improved? It would be nice to be able to simply grab the focus ring of the lens to engage manual focus, instead of having to press a button. I think adding this would give operators extra confidence that they could take over whenever they felt the camera wasn’t up to the task.

Having the ability to connect wirelessly to the camera and control the touch AF on a tablet or smartphone screen would also be amazing. Current wireless on the Sony compact system cams is just too laggy and offering this type of control shouldn’t be too hard to do. (I have the same criticism for the Canon C300 mkII with its tablet wi-fi connection).

So the a6500 AF system is not totally infallible and I would still choose to use it selectively. For the time being there is still a use for my manual focusing skills. But for how much longer? The massive leaps taken by makers in just a few years makes me convinced that the days of manual focus are numbered for many real world video shooters (just to be clear, this does not mean I think drama and narrative work will go the same way). In the end the technology will get there, and it’s doing so faster than expected.

The a6500’s touch autofocus system is a killer feature. No other small 4K camera comes close for natural looking AF at the moment. Having used it I see no going back, so I bought one.