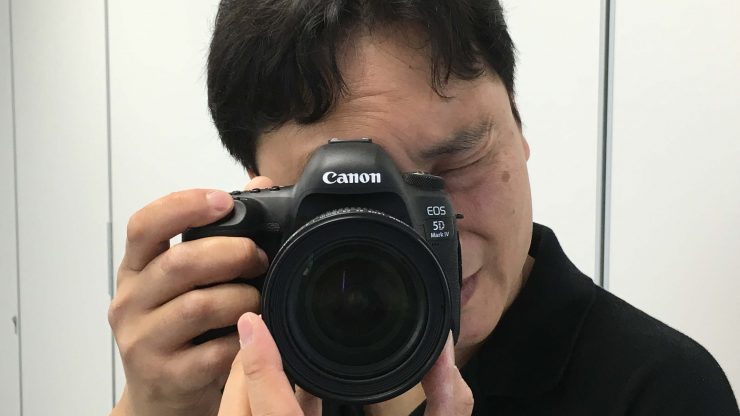 Canon have today announced the latest incarnation of the 5D. Earlier this week I spent some time with the camera and I think it’s safe to say that it is going to satisfy a lot of stills shooters and disappoint a few video users. A caveat: I wasn’t allowed to record any imagery or look at the output on a monitor. Let me take you through the video specs before I get to my thoughts.

The headline news is the camera records high quality DCI 4K video internally, but disappointingly this requires a massive 1.74x crop factor. Canon have done this to maintain a high quality 4096 x 2160 image without pixel binning, using the central portion of the camera’s 30.4 megapixel CMOS sensor. To get full-frame video you need to shoot in HD.

In DCI 4K it records using the Motion Jpeg format at approximately 500 Mbps in 8-bit 4:2:2, and 4K frame rates are 29.97, 25, 24 and 23.98 fps. Strangely there seems to be no option to record in regular UHD 4K – which is inexplicable to me. The camera has a CF and an SD card slot, but you’ll need huge superfast cards to shoot in 4K. Offloading your imagery is also going to be slowed down as a result.

The other big bit of news is that external recording is limited to HD in uncompressed YCbCr 4:2:2 8-bit. In essence, this is the same system as the flagship 1DX mkII (but recording to CF, not CFast 2.0 cards). But because of the 5D mkIV’s higher pixel count sensor, the crop factor is much greater (1.74x compared to approximately 1.3x).

Like its predecessor, the 5D mkIV should be no slouch in the low light shooting department – sensitivity ranges from 100 ISO to 102,400 ISO – though we’ll have to see how it works out with the 4K crop mode.

Audio is catered for with a single stereo minijack input or the built-in mono mic. Nothing has really changed here since the 5D mkII. There is, however, a headphone jack.

Probably the biggest video use single selling point for the 5D mkIV will be its dual-pixel CMOS AF system. The video AF on the 5D mkIV is the most usable that I’ve seen to date. The addition of a touch-screen to the rear LCD means that you can now simply press on the subject you want to be in focus and the camera will focus on that point. For many casual users and photojournalists, I suspect it will become the main way of focusing, doing away with the need for viewfinders, LCD monitors and other viewing gadgets. Again, it is essentially the same system as the 1DX mkII and Canon C300 mkII, but the touch screen makes life much easier.

The 5D body size combined with dual-pixel CMOS AF and 4K recording could have proved a useful tool for serious filmmakers wanting a small camera to put on gimbals, jibs, cranes, car mounts and the like. The only problem is that it’s hard to get a suitable wide-angle lens for the 1.74x crop.

Perhaps the headline feature from the stills point of view is the Dual Pixel RAW set up, which allows you to make image adjustments even after you’ve shot them – refocusing and, even more interestingly, messing around with bokeh.

Here’s Canon’s technical explanation: “Each of the EOS 5D Mark IV’s 30 million pixels is made up of two photodiodes which can be used together or individually. This technology enables the creation of Dual Pixel RAW files which contain a pair of images shot from two very slightly different points of view.”

When processed with their Digital Photo Professional software, the files can be adjusted in three ways: Image Microadjustment allows the position of maximum sharpness to be adjusted; Bokeh Shift allows out-of-focus highlights to be shifted horizontally so they coincide better with in-focus elements; and ghosting reduction can be used to reduce the appearance of artefacts like flare.

This is fascinating technology and I’m guessing it’s an indication of what Canon may do in video in future – if they can do it with stills, they will at some point be able to do it with video, though presumably it would take enormous amounts of computing power.

The camera has various picture profiles but Canon Log isn’t one of them. As followers of this site will know, I’m not necessarily a fan of Log shooting for everything. But in an age when Sony, Panasonic, Leica and now Fujifilm have Log in their video-capable cameras I would question the wisdom of Canon’s choice here.

The form factor of the 5Dmk IV basically hasn’t changed. There’s no tilt screen, no EVF option – it’s just the same as it was before and you’ll still need all the widgets and accessories you needed to make the mkIII work for video.

In short, there are two ways of looking at the 5D mkII, depending on what you were expecting. You can see it as a great photojournalist’s camera with nice quality 4K video thrown in for good measure. On this view, it offers fantastic stills quality in a familiar package, as a nice upgrade to what was already an industry standard tool. The dual pixel RAW adjustments are the icing on the stills cake. If AF for video is your bag, it has possibly the best system on the market, which could be very useful in fast-moving situations. Check out the video below with professional photographer Tom Barnes who feels right at home with the camera:

Alternatively, you can view it as a rather disappointing failure to deliver on the early promise of the DSLR video revolution which Canon accidentally pioneered with the 5DmkII. Users who, perhaps unrealistically, wanted to see full frame 4K external recording or even RAW video have been confounded. Instead, the camera is limited to outputting 1080 HD in 4:2:2 via HDMI thanks to Canon’s use of the older HDMI 1.3 instead of 1.4 or 2.0.

There is no high frame rate shooting in 4K either. Worse still, the 4K image is a very strange 1.74x crop factor that is completely non-standard. Getting a ultra wide angle shot will be tough.

There isn’t even a Log gamma to be seen on the camera (but then, I didn’t really expect it). Canon, its detractors argue, want to protect their Cinema EOS lineup and not offer too many video features on their photo cameras. And there are no dedicated XLR audio adapters option – despite Canon actually making one for the C300 mkII that would be perfect if the 5D IV had the right socket.

Ultimately, the heavy crop factor and the use of the inefficient older codec restrict the usefulness of the 5D mkIV for filming. Clearly, the emphasis here is on stills. But Sony managed to pull off a much better video performance with their a7R II which has an even higher still pixel count. I just wish Canon had managed to do the same here. That said, I still want one, not least to check out the stills features and especially the Dual Pixel RAW. As with all these hybrid cameras, only you can tell whether a model strikes the right balance of features for you.