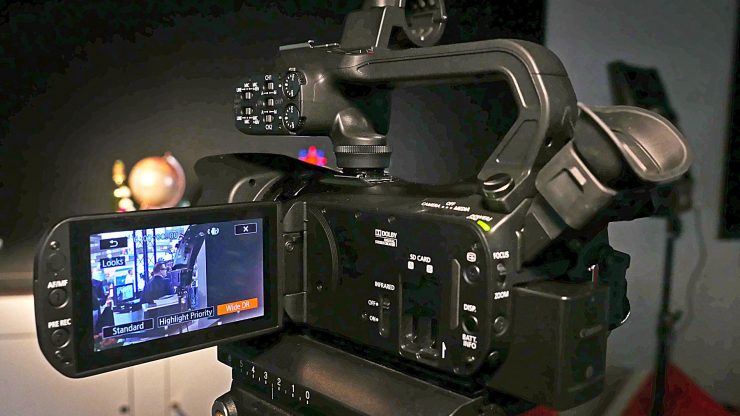 We got a first look at the XA35, which they had on the show floor – but is so new they wouldn’t talk on camera about it.

The camera is basically the same as the preceding XA25 model, except with a new sensor that gives +3db better low-light ability, they say. The XA30, already listed on B&H at $2,000, has HDMI-only video connections, while the XA35, listed at $2500, adds HD-SDI for use with switchers and other video outputs.

It has the same body and 20x zoom as the XA25.  Along with the increased sensitivity of the new sensor, come new entries under the ‘look’ menu:  Standard, Highlight Priority, and Wide DR.  Wide DR lowers the contrast and will require grading. It increases the dynamic range to “600%”, according to Canon.  The Highlight Priority mode “makes it possible to capture visual characteristics that might otherwise be lost due to video compression, creating video that can realistically convey such qualities as the three-dimensional feel of blue skies and clouds, the translucence of water and the luster of metals.” 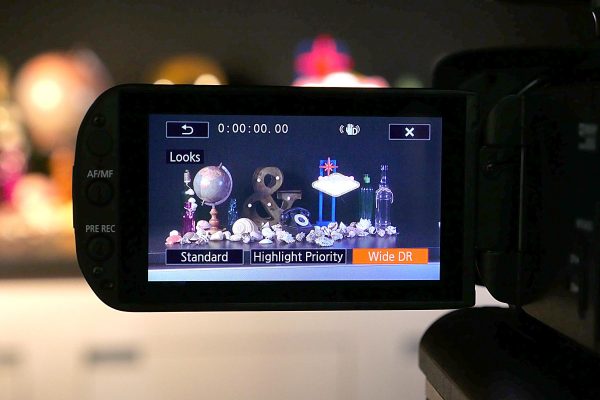 They did not have the camera hooked to a monitor so I couldn’t tell what effect the different settings actually had. The Wide DR had a sort of log-like grayness on the LCD screen, while the Highlight Priority setting seemed to give a snappy and ready-to-broadcast image on the LCD.

The EVF remains small and unimpressive.

I’m a big fan of the preceding XA25 model for multimedia journalism and this new model keeps all that goodness. You can down-convert the HD footage from one SD card to the other to give you web proxy files, which can be transmitted relatively quickly over a cell connection.  It has WiFi built in so you can even transmit those proxy files straight from the camera to your own FTP server.

The more-sensitive sensor seemed to improve low-light autofocus performance over the preceding XA25.  The new sensor is also supposed to improve the infrared shooting in camera. Also new is slow and fast shooting.

They’re supposed to start shipping at the end of November.

“The ability to deliver high-quality video in a compact and mobile form factor is extremely valuable to videographers of all backgrounds,” said Yuichi Ishizuka, president and COO, Canon U.S.A., Inc. “The XA35 and XA30 camcorders were designed to help professionals who are in the field, in uncertain environments, capturing action as it happens. Whether in a war zone or at a wedding, these camcorders will help professional videographers to be at their best when they need it.”

The Canon XA35 and Canon XA30 HD camcorders feature Full HD (60p and native cinematic at 24p) 1920×1080 recording capabilities with dual SD card slots, recordable to AVCHD (28Mbps) and MP4 (35Mbps) and an HD/SD-SDI output (XA35 only) to feed video directly to a microwave van, satellite uplink, or other TV transmission system. The new Highlight Priority video-recording mode makes it possible to capture visual characteristics that might otherwise be lost due to video compression, creating video that can realistically convey such qualities as the three-dimensional feel of blue skies and clouds, the translucence of water and the luster of metals.

Furthermore, drawing from technologies employed in Canon’s Cinema EOS System lineup of professional digital cinematography products, the new Wide DR mode achieves a dynamic range that has been expanded to 600 percent compared to the 300 percent on the predecessor Canon XA25/XA20 camcorder models. The mode helps minimize the occurrence of under- and over-exposed areas to help create smooth color gradations, even when shooting in environments that tend to produce under- and over-exposed regions, such as those with drastic differences in lighting conditions.

The brightness performance of these camcorders when shooting infrared has been improved approximately 1.4 times higher than the previous models. Infrared shooting uses an infrared diffused LED light to enhance brightness to the very edges of the image while shooting in low-light situations. The sensitivity of the new sensor also enhances this feature.

Also new to the XA line of HD camcorders are slow (maximum 0.4x) and fast (maximum 1200x) recording options, further enhancing a videographer’s ability to shoot creatively. Professionals can access these modes through the easy-to-operate user interface displayed on a vivid 3.5-inch, 1.23 million-dot OLED touch-panel display and 10,000:1 contrast ratio Electronic Viewfinder with controllable iris. The display features a view assist function which provides users the ability, while in highlight priority (gamma) mode, to adjust brightness and gamma setting of both the display and EVF to help display subjects in the most realistic way possible. To help facilitate better focus ability and clearer, more pristine images, these models feature High Definition Peaking for Focus Assist. In addition, both models allow for full manual control and assignable buttons for custom shooting and also have advanced display features that allow for adjustment of zebra, color bars and test tone.

The XA35 and XA30 HD camcorders both feature wireless connectivity for easy sharing and uploading of files. FTP file transfer of MP4 (3Mbps) format video to cover breaking news is enabled by dual-band wireless support (5GHz and 2.4GHz), which also allows for data sharing. A wireless remote feature also enables users to control the XA35 and XA30 camcorders via a web browser on the user’s compatible PC or mobile device. Camera videos can be played back or downloaded to a compatible device using the web browser of a PC or mobile device connected to the camcorder. In playback mode, video files can be uploaded to social media websites via the free Movie Uploader app, currently available only for compatible iOS® mobile devices.

The new Canon XA35 and XA30 HD camcorders also support use of the optional Canon GP-E2 GPS receiver, which can be connected via USB cable to provide location and time information recorded during shooting. This capability supports editing workflow and can add valuable information for archiving purposes. Additional features include connectivity to various inputs and outputs, including two phantom-powered XLR audio inputs with main ground control and optional Bluetooth mic and two-way intercom-like capability.