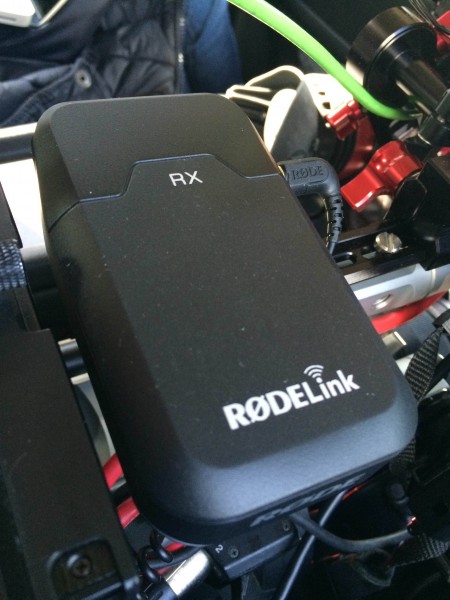 The first product in the RodeLink digital wireless range – The Filmmaker Kit – has commenced shipping to RØDE dealers worldwide. I’ve had my hands on the system for the last few weeks and used it on a job for Japanese broadcaster NHK. For those who aren’t familiar with the RodeLink system, it is Rode Microphones first foray into digital wireless microphones. RØDELink utilises a next-generation 2.4GHz, 128-bit encrypted digital transmission sent on two channels simultaneously, providing a 24-bit/44.1k digital audio signal at a claimed range of up to 100 meters (over 100 yards). The RodeLink system is able to constantly monitor and hop between frequencies to maintain the strongest possible signal level.

Rode have chosen to use the 2.4GHz band instead of the traditional UHF frequencies that pro radio mic systems from companies such as Sony and Sennheiser. Rode aren’t the first company to use the 2.4GHz band and probably wont be the last, but it does mark a different approach to building a modern pro wireless system compared to most of the competition.

The thought process behind using the 2.4 GHz band is that it is less crowded than the UHF frequencies traditionally used. This may however be a bit of a misconception; 2.4 GHz is less crowded than UHF when you look at other wireless 2.4 GHz mic systems that are being used, but there is a lot of other traffic using the 2.4 GHz band including all the wireless access points and routers that use the same frequency band in densely populated areas. Because of this I wanted to test for myself how the RodeLink worked in a variety of environments to see if i encountered any interference or frequent disruption. I tried it in a number of locations around Japan: the system underground where there was a lot of concrete, indoors, in the countryside and also in the middle of busy Tokyo. I didn’t encounter any problems with frequency disruption anywhere I used it.

I can’t say how the RodeLink will perform in your city or country as it will totally depend on how many people are using the 2.4GHz frequency band where you are. Hopefully other users from around the World will report their findings soon.

Another slight trade off with using the 2.4 GHz band is that it traditionally doesn’t offer the same sort of range as UHF radio mics. While this is true, most people who use radio mics will find that a 100 metre range is good enough in most scenarios. I did find from my experience that the range wasn’t quite as good as other (more expensive) UHF based radio mics I own. Line of sight seems to be very good but it does seem to drop out very quickly once the transmitter goes behind a solid object such as a wall or building.

Another big advantage of using 2.4GHz is that RodeLink can be used Worldwide. Without the stringent rules that govern the UHF bands, I think we will start to see more and more manufacturers moving to the unlicensed 2.4 GHz band. I think it is a smart move by Rode to go this route as not only do you not have to make multiple different frequency band units for use in different countries, but you also allow the customer to use RodeLink anywhere in the world.

Audio quality:
Audio quality for me is the number one priority regardless of price, design and ease of use. The RodeLink produces fantastic results and I was very happy with the audio quality. A small part of me was expecting the audio quality to be average given the low price point, but I was pleasantly surprised. I have used a lot of radio mics over the years at varying price points and to me the RodeLink sounds as good as systems costing far more money.

Build quality:
The RodeLink is a lot bigger than most other systems and this is in part due to the fact that the antennas are built inside the unit and not placed on the outside. I like the idea of not having antennas that can be broken or snapped on the outside but I’m not overly thrilled about having a radio mic that is a lot bigger as a trade off. Having a receiver that is big is not a huge deal, but having a transmitter that is quite large does make hiding the unit on your subject particularly difficult. Both the receiver and transmitter are very light and they do feel plastic, but in saying that they do see to be fairly well made. The buttons and display are nice but I did have a problem on the transmitter; Every time I took it off my subject a small rubber grommet that covers a mounting point on the back of the unit kept falling off. While this is not a huge problem it was a little disappointing that this kept happening. I have since been in touch with Rode and they are aware of the problem.

Both the transmitter and receiver can be fitted with a cold shoe mount that is round instead of the traditional square shape. I actually like that they have done this as it means that once the unit is mounted on a cold shoe you can move the RodeLink around to any direction you like without having to take on and off all the time. The connections for microphone inputs and audio outputs are nice and solid and firm but I do think they should of included a mini jack to XLR connector with the kit as not all users will be using RodeLink with DSLR’s or small cameras that don’t have proper audio inputs. 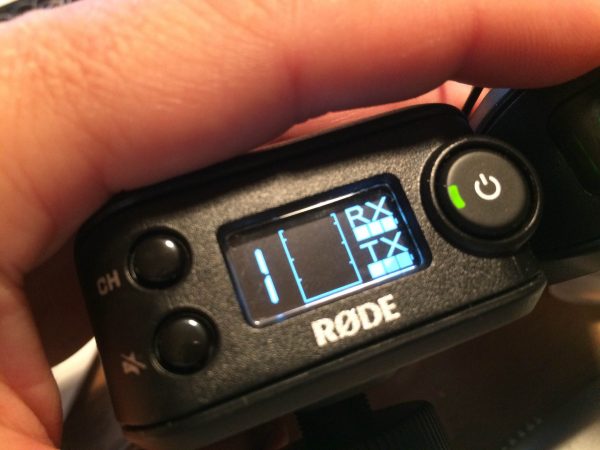 Ease of use:
This is where the RodeLink scores very highly. I have never seen a wireless system that is so simple to use. All you do is turn it on and it’s ready to go. As it uses the 2.4GHz band that I talked about earlier, the RodeLink is constantly monitoring and hopping between frequencies in real time without you having to do anything. The battery life is absolutely superb. I used the RodeLink system for more than 30 hours and didn’t have to change the batteries in either the receiver or transmitter. Whatever Rode are doing power wise with the system they are doing a good job (I was using rechargeable AA batteries during my use).

The RodeLink system certainly offers a lot of value for money. With great audio quality, ease of use and amazing battery performance. I’m sure a lot of shooters will be very pleased with the RodeLink system. The physical size is probably the only thing some users may find not to their liking, but it is a small trade off given the level of performance the RodeLink offers.

Full disclosure: Rode is a sponsor of this blog and our trade show coverage.