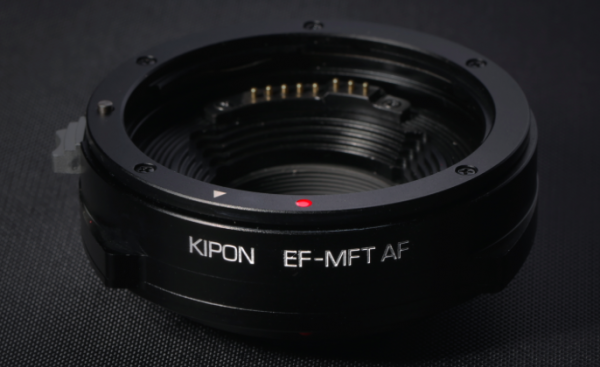 Chinese lens adapter maker Kipon has announced a world first; a high speed auto-focus adapter that allows you to use Canon EF full-frame and EF-S APS-C lenses on a M4/3 camera mount. The adapter is equipped with electronic contacts and a built-in circuit board that includes a chip. As well as the auto-focus and stability function, the adapter can transmit precise EXIF information to the camera body.

Previous Canon EF to M4/3 adapters have been limited to manual focus only, but now the Kipon adapter also allows for auto-focus functionality from those looking to use Canon glass. Plus, the ability to utilise Canon’s image stabilisation (IS) lenses on a M4/3 camera mount is something a lot of owners will appreciate. There are of course several other adapters that already offer aperture control and it is worth mentioning that both MTF and Aputure do offer wireless remote controlled manual focusing.

This new adapter is potentially great news for owners of the new JVC GY-LS300 with its larger Super35 sized sensor – as long as the adapter’s inside diameter is large enough to cope with it (it looks narrow in the product photos). I’m also not sure if the auto-focus will work but having a slim adapter is a definite plus.

The adapter is not a ‘Speedbooster’ and has no glass inside. This limits its appeal on smaller sensor cameras like the GH4 and Blackmagic Design Pocket Cinema Camera because of the crop factor of their sensors – somewhere in the region on 2.4x – 2.7x depending on the camera and mode.

If the adapter works well then it will make the JVC GY-LS300 an even more intriguing prospect for existing Canon EF lens owners. The GY-LS300 features a Super 35mm sensor but has a M4/3 lens mount on it. Couple this camera with the ability to use Canon EF glass and IS capability and you will end up with a camera that has a lot of run-and-gun potential.