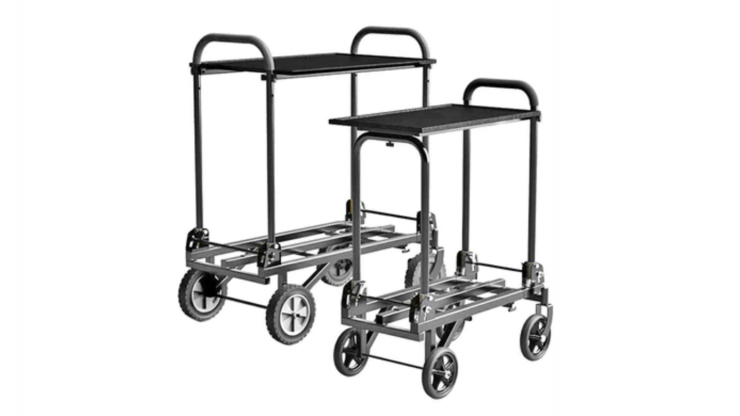 CAME-TV has announced new Portable Production Carts that look like a decent solution for anyone who needs to carry a lot of kit but doesn’t want a cart that is too heavy and not portable.

There are two different versions of the Portable Production Carts available. The first is the C65 and then there is the slightly larger C100.

Anyone who works in this industry knows the pains and hassles of moving around and carrying a decent amount of kit. While large production carts from companies such as Inovativ are great, they are very heavy and not always the best option for a lot of jobs. The CAME-TV Portable Production Carts have been designed to be somewhat of an in-between solution. What I mean by in-between, is that they aren’t as large and as heavy as say an Inovativ, but they are bigger than a lot of traditional trolleys.

The concept behind the Portable Production Carts was to make something that was expandable and foldable while also providing a sturdy platform that was portable.

The carts are fully foldable providing a small foot print so that they easily fit in the trunk of a vehicle while taking up minimal storage space.

The Production Carts are constructed out of strong/lightweight tubing that has been laser welded together. Laser welding provides a strong and sturdy connection. The handhold areas feature a soft grip padding on the tubing.

Above you can see how much the various versions weigh and their dimensions. The Carts aren’t exactly lightweight, however, they are not nearly as heavy as production carts from companies such as Inovativ.

The Production Cart features oversized wheels that incorporate a soft outer compound which CAME-TV claims help to provide quiet movement and good traction across a wide variety of surfaces.

Locking casters prevent run away and safely lock the wheels in place providing for unattended loading /unloading of the cart.

I haven’t seen one of these carts so I can’t comment on how well the wheels work. Having good wheels on any cart or trolly is a must because it often plays a big part in determining the overall user experience.

What sizes are available?

As I previously mentioned, the carts are available in two sizes C65 (Small) and C100 (Large) with and without a top shelf (Base Plate).

Below you can see the prices for the different carts that are available.

These prices still make the Portable Production Carts reasonably expensive and they face stiff competition from existing brands like MultiCart, Gator, and OnStage.