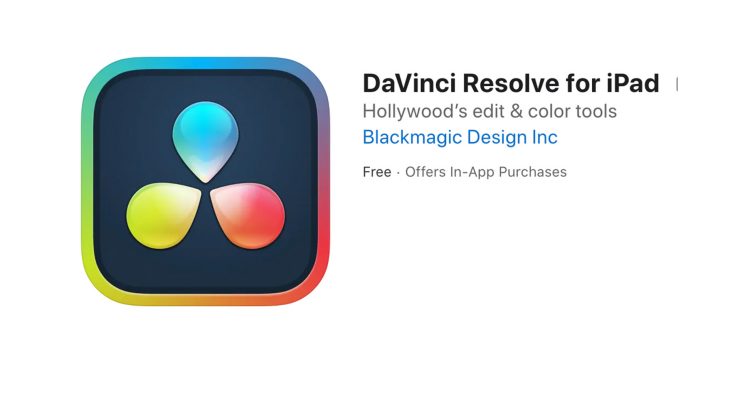 Blackmagic Design has officially released DaVinci Resolve for iPad. You have to be aware that the app is designed to work with M1 and M2 iPad Pros. While it can be used in former versions, the performance and features could be limiting.

“DaVinci Resolve for iPad is optimized for the iPad Pro with M1 and M2 chips. Earlier and iPad models with memory limitations have limited functionality available.“

Another thing to be aware of is not all features are free. If you try to use a feature that isn’t available in the free version, then you will need to purchase a $94.99 Studio license. This isn’t the same as the desktop version that sells for $295.

The cut page has a streamlined interface that’s fast to learn and designed for speed. Features such as source tape for visual media browsing, fast review, and smart editing tools help work faster. Everything on the cut page is action-based, so every click does something.

Tools such as magic mask need only a single stroke to locate and track people, features, and objects in a shot. You can make characters stand out in an under lit shot, or invert the person’s mask and stylize the background. Smart reframe repurposes footage to dramatically different aspect ratios by recognizing the action in a scene and panning within it so you can quickly create a square or vertical versions for posting to social media. Voice isolation lets you easily remove loud, undesirable sounds from interviews and dialogue recordings from noisy locations. AI tools create quick, accurate results, saving you hours of time! DaVinci Resolve for iPad is the same professional tool based on the same codebase used on major Hollywood feature films.

DaVinci Resolve for iPad is optimized for the iPad Pro with M1 and M2 chips.

DaVinci Resolve for iPad Pro is available now to download and purchase the Studio version. The paid Studio upgrade version is available to purchase in the app for US$94.99