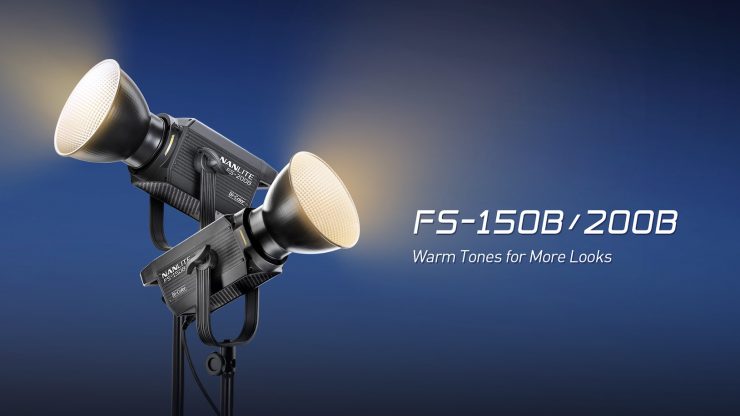 Nanlite has announced the FS-150B and FS-200B COB spotlights. They are the newest members of the FS series and Nanlite states that they offer high output and good performance, at an affordable price.

As far as output is concerned, Nanlite claims that the FS-150B can output 26,300 lx at a distance of 1m / 3.3′ when used at 5600K. The FS-200B has a claimed output of 29,490 lx when used at 5600K at the same distance. These figures are when both lights are using their included reflector and are being used in the Maximum output mode. You can change the output to Constant if you would prefer to have the light generate the same amount regardless of the CCT setting.

I do find it a little strange that there are two lights that feature almost identical outputs and feature sets. Nanlite, Godox, SmallRig, and a few other lighting companies are all doing this. Personally, I don’t think it makes much sense, because why would you choose the more expensive FS-200B when the FS-150 has a very similar output?

Nanlite states that both fixtures utilize an efficient cooling system and that a heat dissipation structure in combination with a fan provides a low noise level. You can also turn the fan off completely, but then the output is limited to just 15%.

When it comes to replicating accurate colors, Nanite claims that the fixtures have high CRI and TLCI scores.

Like most fixtures these days, there is a range of effects that you can choose to use.

You can control the lights onboard or via WiFi, Bluetooth, wired control, or remote controller.

The lights retail for the following prices:

Nanlite has quite a few optional extras available for their FS series lights. You can choose from softboxes, a Fresnel, or a Projection Attachment.