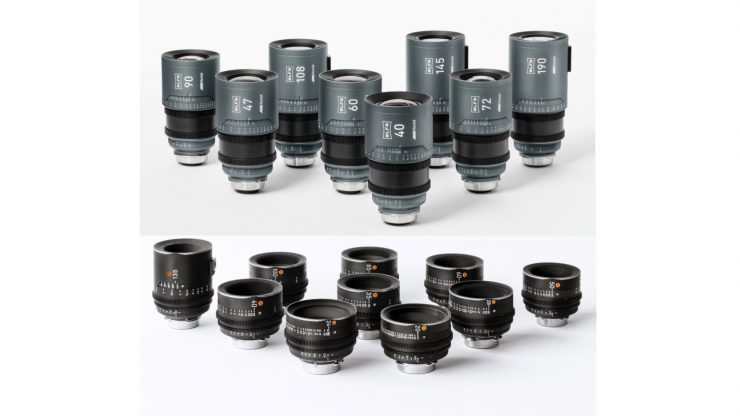 ARRI Rental has announced the ALFA and Moviecam large-format lens series. Both series were conceived and constructed by the same team that was responsible for ARRI’s very popular DNA lenses that were purpose-made for full-frame and 65mm cinematography.

The ALFA series are anamorphic lenses, while the Moviecam series are spherical.

Both the ALFA and Moviecam series are LPL-mounted and incorporate LDA chips for efficient lens data workflows, making them suitable even for VFX-heavy productions. The lens housings are manufactured in-house at ARRI Rental. The ALFA and Moviecam lenses are now available from ARRI Rental facilities worldwide.

The ARRI Rental ALFA lens set comprises eight lenses ranging in focal length from 40 mm to 190 mm. The original concept for the ALFA lenses came from renowned DP Greig Fraser ACS, ASC, who was also a key collaborator on the DNA lens program.

The ALFA lenses are a direct response to cinematographers who were asking for more large-format anamorphic options. The ALFA lenses feature a fast T2.5 aperture for the majority of the focal lengths. ARRI states that they deliver a uniquely characterful anamorphic look for large format.

The ALFA series is based around ARRI’s Master Anamorphic lenses. ARRI and ARRI Rental not only adapted them to cover the larger format, but they also customized the lenses internally to obtain specifically requested image attributes. The purpose-designed lens housings still contain Master Anamorphic glass, but they are now accompanied by other bespoke optical elements and modifications that combine to create a look that is entirely new.

“The modifications we built into the ALFAs brought out an entirely new dimension in the Master Anamorphics, with a nice vignette of softness around the edges but a super-sharp center that we could degrade if required. What was nice about working with ARRI Rental was the focus and attention they gave us to achieve our goals. These lenses are incredibly different from, for example, the DNAs we worked on for ‘Mary Magdalene.’ ARRI Rental has been able to pivot and alternate their focus in the same way that that I alternate my focus when I’m doing different projects.”

The ARRI Rental Moviecam lenses combine vintage glass and a cinematic backstory with modern, high-performance lens housings. They are compact and lightweight and they provide full-frame coverage. The lenses come in 11 focal lengths from 16mm to 135mm and they feature a T2 stop across most of that range.

Moviecam lenses date back to the 1980s. They utilize extremely high-quality donor glass dating from the 1970s. In the 1990s, ARRI acquired the Moviecam company and incorporated some of its camera technologies into the ARRICAM ST and LT.

While cameras were the focus of ARRI’s Moviecam takeover back in the 1990s, ARRI Rental recently saw an opportunity to have another look at the Moviecam lenses. With more and more filmmakers seeking a vintage look, ARRI Rental has created a large number of consistent Moviecam sets, to be offered across all of its global territories.

ARRI has essentially kept the original Moviecam design, and engineers have built the same 1970s optics into new lens housings.

The Moviecams lenses are characterized by their combination of a vintage look with practical ease of use. The 100mm and 135mm are both T2.8, the 60mm is a T1.5, while the rest of the focal lengths are all T2. ARRI states that the optical performance is consistent throughout the whole focal range.

“I like the quality of the vintage Moviecam glass, which looks very organic and soft, but without losing detail or drawing attention to itself. The Moviecams are very forgiving on the skin. The roundness of the lenses is outstanding, the bokeh looks very naturalistic, and if they flare, it doesn’t look as technical as with other lenses.”

ARRI is certainly not the first company to rehouse Moviecam lenses. Japanese-based Eastern Enterprises is just one of many companies that has also done conversions.