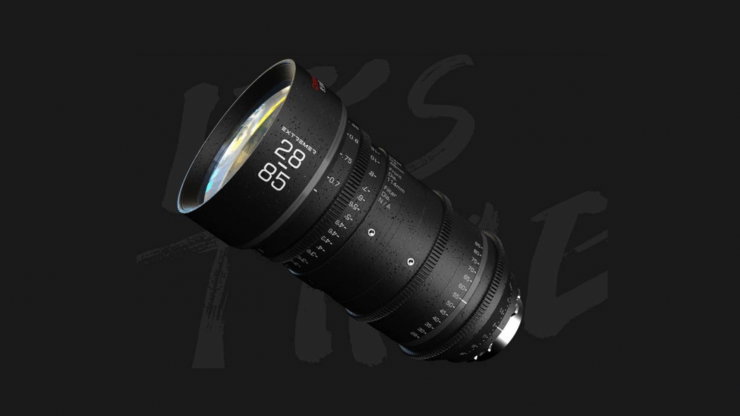 The CHIOPT Compact Zoom 28-85mm/T3.2 is the first lens in a new EXTREMER series. EXTREMER is a contemporary cinema lens series that will consist of multiple full-frame cinema lenses.

CHIOPT is a Chinese company that has been around since 2012. They mainly specialize in making industrial and security lenses.

We have seen a few affordable S35 cine zoom lenses come to market, but no full-frame options.

With most cameras coming out having full-frame and larger sensors, there has been a gaping hole in the market for affordable cine zooms. Plenty of affordable full frame and larger cine primes have come out in the last few years, but it is a lot harder to make a zoom than it is a prime.

The lens covers image circles of up to 46mm, so it can be used on all of today’s modern digital cinema cameras.

Above you can see what the image circle coverage is for some of the other full frame and greater cine zooms with similar focal lengths.

Above you can see how the weight compares to other similar focal length cine zooms. The CHIOPT COMPACT ZOOM 28-85mm/T3.2 is a tiny bit heavier than the Zeiss 28-80mm T2.9, but quite a lot lighter than the other lenses.

The lens is claimed to feature a parfocal design and well-controlled breathing. The focus throw is 288-degrees. The minimum focusing distance from the front of the lens is 40cm (1.31′). The front lens diameter is 114mm.

Instead of making two different versions of the 28-85mm/T3.2, CHIOPT has placed the metric scale on the left side of the focus ring, and the imperial scale on the right side.

A PL native mount is standard, but there are also Canon EF and Sony E mounts available. CHIOPT states that other mounts will also be available in the future.

Is the lens design based on something else?

There is zero indication of how much the CHIOPT Compact Zoom 28-85mm/T3.2 will cost or when it will be available.