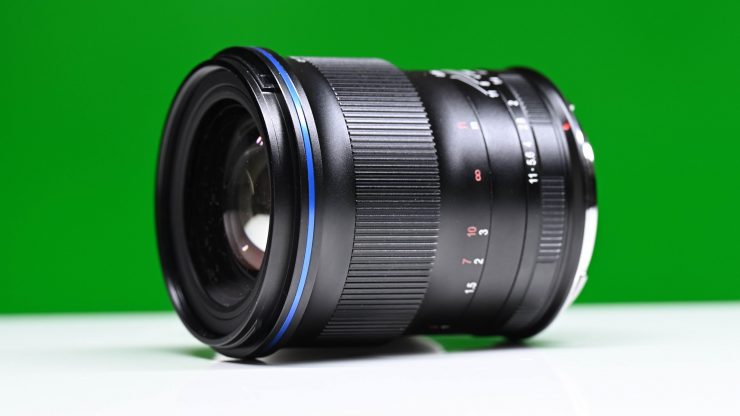 The lens is being touted as an affordable, compact-sized, S35 prime lens. On paper, it appears to be an interesting option if you are looking for a very fast, manual operation prime lens, but don’t have a lot of money to spend.

In some ways, this is an unusual lens. On one hand, it has a clickless aperture and a large focus rotation which makes it feel like a cine lens, but on the other hand, it doesn’t have very clear marking and it doesn’t feature 0.8 pitch gears. In a lot of respects, it is in between a cine lens and a stills lens.

Making a lens that only covers APS-C sized sensors in 2021 may seem to be a strange choice, but there are still quite a lot of cameras out there that aren’t full frame. For owners of cameras like the Canon C70, RED Komodo, and quite a lot of the FUJIFILM options, lenses such as this make a lot of sense.

In saying that, convincing users to go with a manual lens when cameras such as the canon C70 have such great AF is going to be a difficult sell.

The lens is available in Fuji X / Sony E / Nikon Z / Canon R mounts. I will be looking at the Canon R mount version of this lens for this review.

This size makes it nice and compact and it suits smaller-sized cameras such as the Canon C70.

The Laowa Argus 33mm f/0.95 CF APO is solidly made (especially for a lens at this price). The focus ring is nice and large and tactile and it has a really nice amount of resistance to it.

The iris ring doesn’t feel as smooth as the focus. Both the focus and iris rings do make a little bit of a noise when you move them. This may not be a big deal to users, but it was something I noticed.

The markings on the lens are shown in meters. The distance scale and iris scale are not that clearly marked on the lens. I would have preferred to have seen actual indicators next to each F stop and focus distance. In saying that, this is a lens that is being aimed at owner-operators and the lower end of the market, so I doubt most potential buyers of this lens will find it an issue.

The lens has a 62mm front filter diameter so you can easily attach common-sized filters. If you wanted to use this lens with a small-sized matte box such as the Tiltaing Mini Matte Box you would need to use a 62mm Adapter Ring.

The minimum focusing distance is 35 cm (13.8″). This is reasonably good for a lens with this focal length.

The lens has a focus throw of 330 Degrees. It is important to remember that this isn’t a cine lens per se so it doesn’t feature 0.8 pitch gears. It isn’t possible to manually pull focus from infinity to the minimum focusing distance in one go. Having such a large focus throw has its cons and pros as I will discuss further later in this review.

I tested out the lens by doing large focus throws and there is definitely breathing. For a lens at this price, the breathing is still reasonably well controlled. Whether lens breathing is a deal-breaker, will depend on what applications you want to use the lens for.

The large focus rotation on the Argus is both a blessing and a curse. It is nice if you are just making slight focus changes or racking between two objects that are fairly close together. However, large focus throws are basically impossible to do by hand, and given this isn’t a cinema lens with pitch gears you would have to attach a removable lens gear if you wanted to use this with a wireless follow focus system.

This is a fast prime lens, so I was interested to see if it was usable when used wide open at f/0.95.

As you can see in my tests, this lens is very sharp, even when used wide open at f/0.95. As you would expect, sharpness does improve as you stop the lens down. Once you hit f/2.8 it is very, very sharp.

Edge sharpness is still reasonably good, but it is certainly softer out towards the edge of frame than it is in the center.

This is a very sharp lens that you can certainly use wide open. For a sub $500 USD lens with an f/0.95 aperture, the sharpness is exceptionally good.

All the tests were shot on the Canon C70.

I personally didn’t like the lens flare from the Argus. The flare is very harsh when dealing with direct lighting sources, and the off-axis flare is not visually appealing. Please bear in mind that lens flare is very subjective.

The lens remains pretty good contrast unless you have a direct light source going straight down the front of the barrel.

I am not surprised to see chromatic aberration on a sub $500 USD f/0.95 lens. However, it is reasonably well contained and I don’t think it will be an issue for most users.

Nice bokeh is something you want if you are purchasing a fast prime lens. The bokeh produced is reasonably nice and round, however, wide open at f/0.95 I didn’t personally find the focus fall-off to be nice and subtle. The fall-off between in focus and out of focus areas is fairly abrupt and I didn’t really get the sense of depth when using the lens. Yes, the out-of-focus areas are very buttery, but with really great fast prime lenses, you get a lovely fall off. This is something you don’t get with the Laowa. This abrupt fall-off may be great for still photography, but I personally find that it doesn’t translate well over to video.

Once you start stopping the lens down, the bokeh still remains relatively round. I personally preferred the loo of the lens once you started stopping it down. To me, F2.8 was its sweet spot. Again. these are just my personal evaluations.

The lens is fairly neutral when it comes to color, if anything it is slightly cooler in tone. It isn’t as cool as a lot of Zeiss lenses, but it all so isn’t as warm as say a Canon lens.

The color tone of a lens is really something you should look at closely if you are going to be using both prime and zoom lenses from different manufacturers. Certain prime and zoom lenses work better together than others. What will work for you will also depend on what camera you are using.

The Argus is a decent lens and it certainly offers good levels of sharpness. While it isn’t optically perfect ( no lens is), it does a good job of balancing price vs performance.

Shooting video, especially anything where something is moving is extremely difficult if you are trying to shoot wide open at f/0.95. If you try and do this you will find that majority of your footage ends up being out of focus, unless what you are shooting is perfectly still.

Above you can see a couple of still images taken at f/0.95 on the Canon R5.

I wasn’t a fan of the flare or the fall-off that the lens offers, but that is just my personal opinion.

The build quality and mechanics are really good, especially at this price point. I like the large focus ring and it is nicely weighted. However, the long focus throw is a little bit of a head-scratcher. If you are going to put a long focus throw on a lens then you really need to put pitch gears on the lens to take advantage of it. In saying that, for the most part, I found the lens easy enough to use and operate.

I apologize that I couldn’t shoot more with the lens, but at the moment there is a state of emergency in Tokyo and it is difficult to do much.

The Laowa Argus 33mm f/0.95 CF APO Lens retails for $499 USD. This makes it reasonably priced given its features and performance.

There are quite a few fast, manual focus lenses out there, but none with this exact focal length.

The only lenses you could really compare would be:

The Venus Optics Laowa Argus 33mm f/0.95 CF APO lens is another interesting offering from a company that has made a name for itself by creating unusual and unique lenses.

The lens is nice and sharp and if you are after a fast manual focus prime lens then it certainly ticks a lot of boxes without emptying your wallet. Yes, there is some chromatic aberration when you use the lens wide open and the fall-off between in focus and out of focus areas is a little clinical for my liking, but you have to remember this is a sub $500 USD lens.

The focus throw, as I mentioned earlier, has its pros and cons. The focus is great if you are making minor adjustments, but it is difficult to use if you want to do big focus pulls.

Having a 62mm front filter thread allows you to use common-sized filters which is important if you plan on using this lens on mirrorless, DSLR, or small-sized digital cinema cameras that don’t have built-in ND. You can also use clamp-on matte boxes with the appropriately sized step-down ring.

The only real negative about this lens is that currently there is only one focal length available. Hopefully, Laowa brings out some other focal lengths soon.

As far as price v’s performance is concerned, the Laowa is very hard to beat if you are looking for a fast, affordable manual focus lens that covers APS-C sensors.