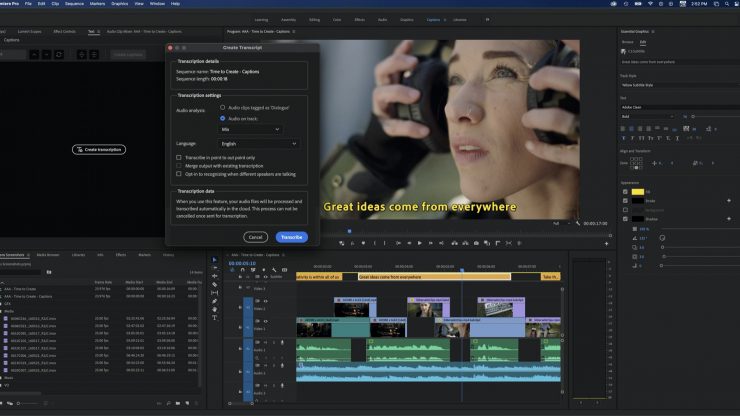 The Adobe July update brings a few nice features to Premiere Pro and After Effects, plus native Apple M1 support for much-improved performance.

With native support for M1 on Mac, Adobe states Premiere Pro runs nearly 80% faster than comparable Intel-based Macs. Along with Premiere Pro, you get M1 support for Media Encoder and Character Animator as well.

M1 support for After Effects will be introduced in public Beta later this year. After Effects, integration features within Premiere Pro, such as Dynamic Link and Motion Graphics templates, have already been optimized for M1-powered Macs.

Speech to Text is a feature many wanted to be implemented into Premiere Pro and now it is. Adding captions to videos especially on social platforms is important as most videos are seen in mute. Since this feature is included in the update it replaces other options that could be expensive and not very accurate.
Speech to Text includes support for 13 languages, and Adobe states early access users around the world have confirmed the impressive accuracy of their transcriptions.

It has a lot of functionality making the process simple and clean with what looks like good editing functions if you want to customize after capturing the text. Also, new Captions customization features give you complete control over the look and feel of captions as well as customize and save your own presets.

If you are still working with Legacy Titles you can now convert them into Source Graphics within your Premiere Pro projects. Source Graphics are displayed in the Project panel, where you can track and sort them like any other project item.
Upgrading Legacy Titles converts Legacy Title attributes, including text stylings, layer settings, and track item filters.

Multi-Frame Rendering in After Effects

Dont want to sit around while rendering? Set up a notification that will be sent to you when the job is done.

Powered by Adobe Sensei, you can animate their entire body all at once, using movements and gestures to animate your puppets. Characters come alive by tracking arms, torso, and now legs too.

With the simple interface, you can pick hairstyles, skin tones, accessories, and more. The animated facial mimicking features are pretty slick and in real-time.

These new feature updates will be available on July 20th at 6 am PT. Creative Cloud is available to customers via a variety of Adobe subscription plans: https://www.adobe.com/creativecloud/plans.html