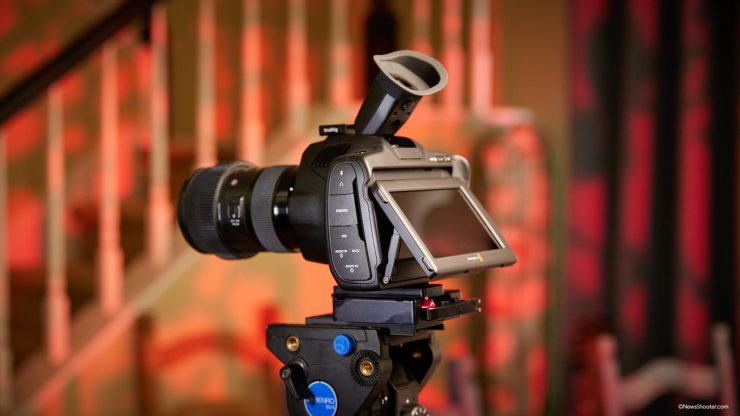 The Pocket Cinema Camera 6K Pro, for the most, is the same as the Pocket 6K model when it comes to the actual image quality and recording specs; however, Blackmagic Design addressed many issues I had with the new version of the Pocket Cinema Camera lineup. I live in San Diego, and most of the time, it’s sunny here, so if I’m shooting outside, I need an EVF. That one is fixed with the 6k Pro. Next, the LCD didn’t tilt and wasn’t bright enough to use outdoors. This one is also fixed, but I did find an issue. Last but definitely not least is the inclusion of internal neutral density filters. That is a biggie!

Since the 7.3 updates were just released, I figured it was a good idea to add them. I won’t be going into all the new features like the updated Generation 5 color science that makes all the Pocket cameras have the same color, but it’s worth mentioning. Also, the color channel clipping indicators are a welcome addition plus RGB in the histogram. Why no waveform monitor? Good question.

The Pocket Cinema Camera 4K and 6K also get:

Having a brighter tilting screen is a solid upgrade on the Pocket 6K Pro. I was not too fond of the shooting experience, especially outside. The brighter 1500 nits screen is beneficial, and the tilting while not articulating is much better. I found myself not bending or adjusting my body position to shoot off the LCD screen. It is much easier on the neck and back when shooting at lower angles and on a tripod that isn’t set at eye level. Another advantage is the touch screen is very useful and required to make system changes. If the camera is on a rig with a battery behind it, having the screen slightly tilted in the setup will make it much easier to make setting changes with the touch screen.

Not being a flip-out screen is probably a good thing as the LCD is large, and it would block ports, but I know many love the flip out and I do as well, but I think BMD made a good choice not to go that route. I know a lot of people, including myself, have to shoot themselves with no help. A monitor and the
Bluetooth+ for Blackmagic app is a good option.

With improvements comes a small problem. The screen has a greenish-blue cast that needed to be addressed. I contacted Blackmagic Design, and they stated a fix is on the way via a firmware update. Well, that update dropped on April 25th and seemed to have fixed the issue.

Below you can see the problem before the 7.3 updates.

The update doesn’t automatically fix the issue after you upgrade the camera to 7.3. Still, it gives you an LCD White Balance Calibration tool that you use to correct the issue, and in the future, you can make adjustments. Just like a desktop monitor, over time, the LCD can change and become less accurate. Having this ability to correct the color is a welcome tool that I haven’t seen before on a camera, but does it work well?

Instructions from manual:
To perform LCD white balance calibration, adjust the ‘LCD temperature,’ and ‘LCD tint’ controls so that the two reference patches look neutral. After you change the settings, you can use the ‘reset button to return the controls to the factory calibration. The ‘restore’ button brings back your new settings, which helps you compare the appearance before and after calibration. When the LCD shows an accurate white balance, save your settings.

I warmed the temperature and added a little magenta tint to calibrate the LCD. As you can see, it really is up to the user’s eye for color correction to get the screen calibrated. I’m fine with doing this as I could easily correct the LCD, but I feel for some users, this might not be ideal. I would’ve liked the monitor to be correctly balanced from the factory instead of requiring the user to make it correct. Seems a little backward to me. Either way, you can get it fixed with a little effort.

The 1500 nits screen holds up much better outside and is very close to the 2000 nits PortKeys BM5.

It strikes me as funny. While other companies take the EVF away from some new models like the Canon C70 and Sony FX3, BMD goes and redesigns a model and makes it an optional accessory. The C200 also had an EVFless option but without an option to add one later.
I absolutely love BMD did this as I felt the Sony FX3 was a prime candidate for the exact idea of having an optional EVF that is simple to add. They choose to use the MI Hotshoe for audio instead.

The EVF isn’t inexpensive at $495.00, but you would be hard-pressed to find a similar solution for less. The EVF for the Pocket 6K Pro couldn’t be any easier to attach. If you have a coin, you can unscrew the cover and pop in the EVF, and screw it down. Done and done!

It’s not perfect, but it adds usability that I need. I can’t shoot 100% of the time off an LCD screen alone. Yes, the Pocket 6K Pro has a nice big 1080 5″ LCD, but the EVF makes it easier to see everything in the scene. When you put it in perspective, the Pocket has Ninja 5 size display slapped on the back. Impressive. Now we have both options.

The image quality is good, but not as good as the Canon R5 or the best in class Sony a7s III EV, but focusing is easy, and it really changes the user experience with the Pocket camera by miles. The EVF has a 70° tilt. It almost gets verticle fully, and it stays in place with a firm bit of dampening.

The EVF has a single proprietary connector that gets the power to the EVF and sends the signal from the camera. Very simple. One thing that would be incredibly handy is an extension cable so you could mount the EVF off to the side on an EVF mount when you want to use the camera on a shoulder rig. This would be really great.

The kit comes with a set of 3 Eyecups for right & left eyes. I prefer to use an eyecup as it blocks light from the sides and is more comfortable to use. You can also add a soft padded eye cushion from Bluestar for an even more comfy experience. One issue is the eyecups are not very secure and tend to fall off easily. It is a bit annoying and can easily be lost. You will have to keep an “eye” out for them not to lose them.

The glass Diopter has a good range with -4 to +4 of adjustment. On the bottom is the dial, and it too has a firm hold so that it won’t slip out of adjustment. I never liked the slide type as they seemed very loose and need to be readjusted frequently.

The camera has three function preset settings on the right top side. These can be customized to your liking, and you have control over whether the tool will be displayed in the EVF. This is handy as you can, for example, have false color only in the EVF or just the LCD. You can also have it on both at the same time.

Internal neutral density filters a huge time saver and makes shooting easier. Not having to fumble with front lens mounted filters is great. This is something I always disliked when shooting with a hybrid camera. The integration of the ND filters is very cool. It does make the camera bigger, but I feel it’s worth the girth.

Neutral density filters can have color shifts, and the Pocket Cinema Camera 4K Pro shows some shifts when changing the strength.

To my eye, 2-stops has a very slight shift, but 4-stops and 6-stops are showing more. This is due to filter stacking as it is using the 2-stops and 4-stops together to get to 6-stops. Either way, I think it’s safe to say you should white balance the camera when changing ND filters.

This is going to be quick.
The Pocket 4K and 6K used the underpowered Canon LP-E6 style battery, and boy, was that a bad choice. The 6K Pro moved to the much higher capacity Sony L-Series. They are a much better choice and much needed due to adding the brighter LCD screen and powering the EVF.

Putting it all together. Is it a better Pocket 6K Camera now?

In a nutshell, yes. The Pocket 6K Pro isn’t a “pocket” camera, especially with the added ND filters has made the overall size increase. This is a trade-off that I’m okay with, as the new EVF and ND filters make the camera easier to use. I am disappointed that the color shift is a lot when using the ND filters. The new Sony L-Series battery makes more sense due to the power the camera needs for the added brightness of the screen and an EVF.

The original Pocket 6K model might not be the one you want, and I’m wondering if BMD intends to add the new EVF, LCD, and ND filter features to the Pocket 4K camera in the future. I somewhat doubt they will with full-frame sensors becoming more available in cinema cameras.
The new features are impressive and make the Pocket 6K a much more usable camera. Whether a large mirrorless style body is something you like instead of a small cinema camera is another story.

Like all cameras from Blackmagic Design, they give you a lot for your money but with tradeoffs. At $2990 with the EVF, it’s a good deal, plus you get strong codecs like ProRes and BRAW. BMD is no slouch when it comes to codecs.