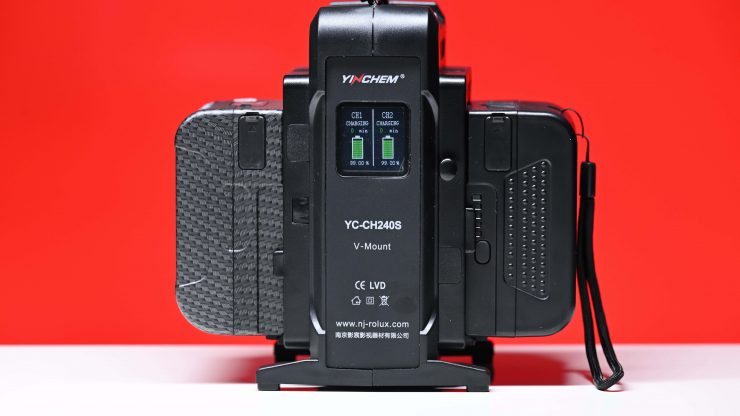 Battery chargers are hardly exciting, but power is critical to everything we do. Equipment needs power and that means batteries and battery chargers should be viewed as an important part of anyone’s kit.

The YINCHEM Dual-channel Adaptive Smart Fast Charger is reasonably well made. There is a lot of hard plastic-type material being used and that is obviously to keep the weight to a minimum.

There are cooling inlets and outlets on the top and bottom of the charger.

YINCHEM has also built the charger so that it can sit on a desk or a flat surface.

They have also included a lanyard strap that you could use to either carry the charger or to hang it on a light stand if you wanted to just utilize a d-tap output on a battery to run a lighting fixture.

The Dual-channel Adaptive Smart Fast Charger can automatically identify battery capacity and provide an appropriate charging current. Each channel can be charged independently.

It is nice that this particular charger is capable of 6A per channel when charging batteries with capacities of 150Wh and above. A lot of dual channel and even quad channel chargers on the market are limited to 3A no matter what battery they are charging.

It has an LCD screen that shows you the charging time and battery level. I actually like that they have included a screen because it is not something you often see on a lot of V-lock battery chargers.

The screen shows you the two channels that are being used, the status of that channel, the current charging time, and the battery’s capacity as a percentage.

Above you can see a charging time comparison between using the YINCHEM Dual-channel Adaptive Smart Fast Charger and one of YINCHEM’s traditional dual chargers.

The charger doesn’t feature any DC output like you will find on a lot of other chargers. It would have been nice to have seen a DC out on the charger.

The YINCHEM Dual-channel Adaptive Smart Fast Charger works as advertised. It is very fast at charging higher capacity batteries, although it doesn’t offer any increase in charging times with batteries that are under 100Wh.

If you happen to fly a lot then you aren’t going to be taking 160Wh and above-sized batteries with you.

While it does perform well, there are some caveats though that you should be aware of. I am not convinced of its accuracy when it comes to showing the battery’s percentage. As you can see above the Anton Bauer battery that I am charging shows it is at 78% charge, but the YINCHEM charger is telling me it is at 94.99%. That is quite a discrepancy.

The biggest issue I have with the charger is that it is very loud. When it is charging it sounds like a noisy air conditioning unit is on or someone is using a hairdryer in an adjacent room. Above you can hear how loud it is at 50cm and 1m away from the charger.

If you are going to use this as a travel charger there is no way I would want to have this turned on in a hotel room if I was trying to sleep. It is also so loud that you couldn’t have it on in a room where you were filming.

Just to be fair, a lot of battery chargers are also noisy. I don’t want you to get the impression that only the YINCHEM is noisy. I’m pretty sure that the caveat to having the ability to charge batteries at 4.5A and 6A comes with the tradeoff of having to dispel more heat, which means fans running faster.

I reached out to YINCHEM to ask them about the fan noise and they told me: ‘Because of its small size but larger power, the internal heat will be relatively large when charging. In order to dissipate heat faster, the fan speed must be faster, so the noise will be louder. We tested the dual- dual-charger and measured the sound level at 63dB. Although this is actually lower than some of our other chargers, the sound frequency is higher because of the higher fan speed, that’s why it sounds noisy.‘

Where to start! There are a ton of dual channel battery chargers on the market. Most of them are fairly similar, however, you need to look closely at how many amps per channel they can deliver. A lot of smaller-sized chargers are limited to 3A.

Below are just a few dual channel chargers that are available.

As an affordable dual channel battery charger the YINCHEM ticks a lot of boxes, however, you do need to be aware of the caveats that come with it.

There will be some discrepancies between the actual charge level of a battery and what the charger is telling you. My biggest concern though has nothing to do with the performance of the charger and more to do with the noise it makes. In saying that, maybe these are things that you are not overly concerned about. Once a battery is charged it is charged and that is all some people are likely to care about.

On the positive side, the charger is relatively affordable, and it is very quick at charging higher capacity batteries. Having the ability to charge at 4.5A or 6A saves you tons of time when charging batteries.