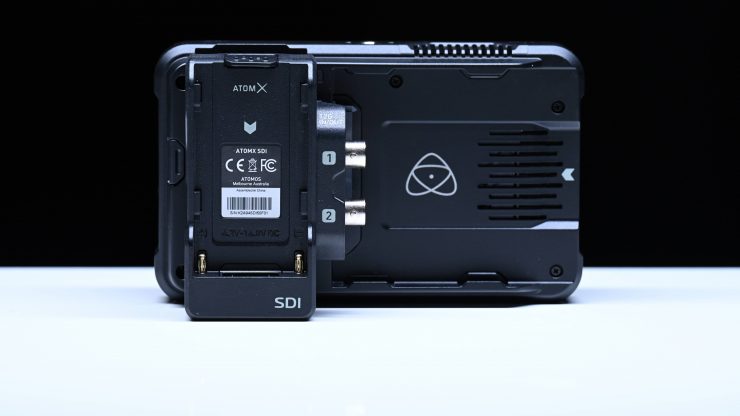 Atomos recently announced the Ninja V Pro Kit, which enables you to record RAW over SDI from select cameras. The Ninja V Pro Kit also comes with a range of accessories that increase functionality.

Just to be crystal clear this is not a new Ninja V, it is simply the current Ninja V with the AtomX SDI and a few accessories. I thought it was worth having a closer look at this kit because I had not yet seen the AtomX SDI module.

I have previously reviewed the Ninja V and if you want to read that in-depth review you can here. So let’s dive in and see if the Ninja V Pro Kit meets all of the expectations it promises on paper.

According to Atomos, the Ninja V Pro Kit was designed to ‘bridge the gap between compact cinema and mirrorless cameras that can output Apple ProRes RAW via HDMI or SDI‘. The Ninja V Pro Kit is far more than just a device to record RAW video. The ability to input or output both HDMI and SDI as well as having the ability to cross covert signals makes the Ninja V a far more versatile tool.

What do you get in the Pro Kit?

The kit I was testing came with the Atomos Hard Case with Custom Foam, the Atomos Power Kit v2, Atomos AtomX 5 and 7″ Monitor Mount, and a few HDMI cables. I’m not sure if they actually intend to sell a kit like this, but it would make a lot of sense to do so.

The addition of the AtomX SDI Module allows users to record not only traditional ProRes over SDI but also ProRes RAW. This allows you to use the Ninja V with a wide array of cameras. Between RAW over HDMI and RAW over SDI, the Ninja V Pro Kit has you covered.

You can also record RAW from the Sony FX6 over SDI to the Ninja V. I tried this out and I can confirm that it does work as advertised.

Even though setting up the RAW output from the FX6 is more complicated than it should be, once it is done, everything works well.

With the FX6, to record RAW over SDI you previously needed to use an Atomos Shogun 7. In my opinion, this monitor was way too big for the camera. I feel sorry for anyone who rushed out and bought a Shogun 7 recently to use it with an FX6. The Ninja V’s size makes it much more suitable for use with smaller-sized cameras such as the FX6.

The Ninja V Pro Kit is also able to record RAW over SDI from other cameras such as the Panasonic EVA-1, Varicam LT, Canon C500, Canon C300 Mark II.

Now, you need to be very aware that RAW outputs from Sony’s FS range (FS700, FS5, FS7) are NOT SUPPORTED on the Ninja V with the AtomX SDI Module and RAW upgrade. Support for these cameras is ONLY available on the Shogun 7.

By adding the AtomX SDI module the Ninja V becomes a lot more versatile product that can be used with a wider range of cameras. The AtomX SDI module adds dual 12G SDI connectivity. Even if your camera internally records to a decent codec, you could also utilize the Ninja V to record a backup 10-bit 422 recordings in edit ready codecs, or use it to record proxy files from RED or ARRI cameras.

Once you have the AtomX SDI module attached the Ninja V then communicates directly with that module.

By adding the SDI module to the Ninja V you can effectively double its I/O functionality. HDMI or SDI connections can be cross converted. This allows you to down-convert 4K to HD so that you can utilize EVFs or wireless TX/RX without the need for additional converters.

This was something that was previously lacking with the AtomX SDI module. I am not quite sure why it took so long to enable the cross conversion.

Now, if you are inputting a UHD signal over HDMI into the Ninja V and then outputting a signal over SDI to a device that only has a 3G SDI input you need to make sure that you turn on the Output Option and select 4K to 2K Output.

If you don’t turn the Output Option on then you won’t see an image on the device you are outputting to.

If you leave the Output Option set at HDMI Auto the Ninja V will output a 6G SDI signal and not a 3G HD signal.

If you are inputting a RAW signal over HDMI from a compatible camera you can still do a cross conversion and get an HD SDI signal out of the Ninja V. This is handy if you want to run a signal into an SDI wireless video transmitter or even an EVF.

If I inputted an SDI signal it was no problem outputting an HDMI signal.

What is also nice is that the AtomX SDI module has two SDI ports and you can use both of them as outputs if you are inputting an HDMI source. This is really handy and it allows you to send signals to multiple accessories at the same time. I was able to output two signals from the Ninja V, sending one to a SmallHD 502 and the other to an Accsoon CineEyes 2S.

If you are using the Ninja V with the AtomX SDI module on a small sized mirrorless camera it gives you the flexibility to output an SDI signal to say an EVF and a wireless video transmitter at the same time.

Does the AtomX SDI module make the Ninja V a lot bigger and heavier?

The AtomX SDI module certainly makes the Ninja V a lot wider, especially once you add a battery. However, the weight of the module is only 4.2 oz / 119.07g so it doesn’t really make any huge noticeable difference.

The biggest problem I found is that because the module and the battery are all on one side of the Ninja V the weight distribution is very uneven. This is not a huge concern, but it does become noticeable if you are using this combination with a bad monitor mount or monitor arm.

Along with the Ninja V Pro Kit, Atomos also released AtomOS 10.61 which added the following functionality:

RAW inputs can also be de-bayered in real-time and non-standard high resolutions are processed to SMPTE standard output formats. Conversion to HLG, PQ, or your choice of 3D LUT can also be applied allowing for RAW or LOG content to be viewed with the correct application of artistic intent.

Included in the Pro Kit is the AtomX 5″ Sunhood. The Ninja V has a reasonably bright screen, but it isn’t bright enough to be used outdoors in sunny conditions. Users can simply clip on the mounting frame and insert the hood to use the sunhood when required.

The sunhood is decent enough and it does certainly help when shooing in bright conditions.

Even if you have no intention of recording ProRes RAW, the Ninja V Pro Kit suddenly makes the Ninja V a lot more versatile product. Even if you just want to use it as an SDI or HDMI monitor or just as an interface to cross convert signals, having these abilities allows you to use the Ninja V with a far wider array of cameras and devices.

My main camera doesn’t feature an HDMI output, but with the addition of the AtomX SDI Module I can now use it and also send out a signal over HDMI.

The Ninja V suddenly becomes a lot more appealing product to me, because I can now swap it around and use it on any camera I own. Previously I only used it with mirrorless hybrids that had HDMI outputs.

What about existing Ninja V owners?

Existing users of the Ninja V can purchase the AtomX SDI module for $199 USD and the NEW RAW over SDI and HDMI RAW to SDI video feature can also be added to the Ninja V via a separate activation key for $99 USD. Existing AtomX SDI module owners will receive the SDI ⬄ HDMI cross conversion for 422 video inputs in the 10.61 firmware update for Ninja V and the activation key for RAW over SDI is available to purchase from the Atomos website.

The Ninja V Pro Kit is now available to purchase from your local reseller for a retail price of $949 USD / €949. As part of the launch promotion, Ninja V Pro Kit users will receive a FREE Atomos Connect in the box.

Does the represent good value for money? Well, let’s see how much the individual items in the kit cost:

That comes to a total of $1,086 USD, so if you are buying the Ninja V Pro Kit, it is certainly cheaper than buying all of the items individually.

It is nice to see that Atomos has enabled RAW over SDI on the Ninja V through the addition of this new kit. Existing Ninja V owners will also breathe a sigh of release as they can just purchase the AtomX SDI Module and the RAW over SDI activation key separately.

This Ninja V Pro Kit greatly expands the versatility and capabilities of the Ninja V and I think a lot more people are likely to look at it now as a viable option.

While there is a lot to like about this new offering I can’t help but wonder why Atomos just didn’t release an SDI version of Ninja V so you didn’t need to attach additional modules. In saying that, Atomos probably has gone down the correct route and not upset all of the existing Ninja V users that are out there. Bringing out a brand new product would have been nice, but it would have also come with the caveat of upsetting a large user base.

I like what Atomos has done with this kit. It offers good value for money given the feature set and capabilities it brings to the Ninja V.