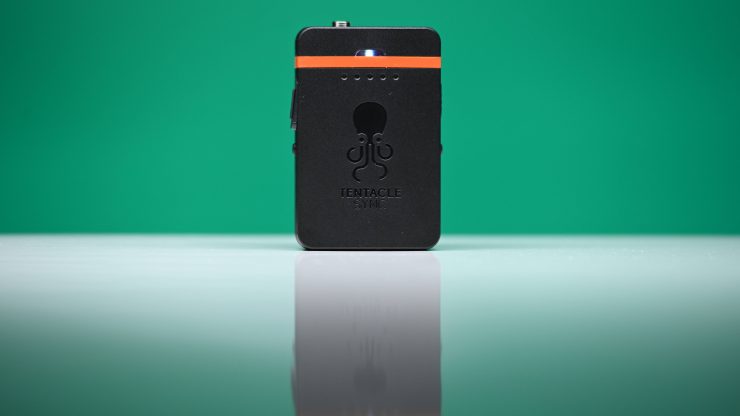 If you are not familiar with the Track E, it is a small, 32-bit float capable stand-alone audio recorder that can also be timecode synced with other Tentacle Sync devices.

Erik did a comprehensive review of the Track E Pocket Audio Recorder a few weeks ago so please make sure you check that out. The Track E Erik reviewed was the US version and that is different from the version I am testing out. The main issue with the US version is there is no way to monitor the audio once you start recording. The US version shuts off the headphone output once the recording has started. This is due to a Zaxcom patent that prevents a simultaneous recording with wireless output.

With the international version of the Track E, this is not the case. You can use the headphone output to send a feed into a wireless TX unit. This allows you to not only record the audio from the Track E to a camera, audio recorder, or mixer/recorder, but most importantly it allows you to monitor the audio. Stand-alone audio recording devices have their place, but if you can’t monitor the audio that is being recorded then you open yourself up to lots of potential issues. You wouldn’t record video with your eyes shut, so why would you want to record audio that you can’t hear.

This is what makes the international version of the Track E so much better than that of the US shipping version.

It will then be shown with all the other Tentacle Syncs that you are using and you can then choose to jam sync it to whatever you have chosen as your master timecode device.

Above you can see what all of the LED indicators display and what features the Track E has.

The Track E isn’t tiny, but it is still relatively small. It weighs in at 58g / 2.0 oz. Above you can see how it compares in size to a Tentacle Sync and a Rode Wireless GO.

The Track E also comes with a detatchable belt clip which makes it easier to place on your subject.

Just like with other Tenacle Sync Devices , the Track E comes with a series of colored bands. These are great because you can place a particular color band around a device and then name that device in the app with the same color. That way you always know which Tentavle Sync device is which. It is a simple solution, but it works really well.

A lot of recent audio recording devices that have come to market feature 32-bit float.

It is best to think of 32-bit float in the same way that you think about RAW video recording. The main benefit of 32-bit float is that your audio recordings can’t clip. Conversely, if your audio levels are too low, you can bring the levels back up without almost no additional noise being added. Above you can see a demonstration from SoundDevices that shows you exactly how it works.

By using the Track E and simultaneously transmitting audio you can get the best of both worlds. You can record a time code synched reference track to your camera or audio recorder, while also recording a time-code synched 32-bit float file directly to a MicroSD card in the Sync E. What you need to clearly remember is that the audio you are transmitting via a TX unit is not 32-bit float.

The only real downside to 32-bit float is that it uses up to 33% more storage space than conventional 24-bit files. You get approximately 30hrs (24-bit) and 23hrs (32-bit) on a 16GB micro SDcard. If you are used to shooting video, this amount of data is tiny in comparison.

Now, you don’t have to record 32-bit float if you don’t want to. there is also an option to record regular 24-bit audio files instead. This may work well for you if you are feeding the headphone output into a TX unit and you want to record a decent level in your camera or audio recorder for use as your main audio source. In that regard, the Track E recording becomes more of a back up in case there is interference with your wireless system. You do, however, need to be aware that if you are not recording 32-bit float audio on the Track E, if your audio gets clipped or is too low you may well not be able to salvage it.

Works seamlessly with other Tentacle Syncs

Yes, there are numerous ways to jam timecode using the Sync E, but I am going to focus on how it integrates into a typical system where you might be jamming TC to multiple devices. Above you can see just quickly you can set up the Sync E and two regular Timecode Sync devices, as well as what control functionality is available.

All you need to do to integrate the Sync E into your Tentacle workflow is to turn it on and launch the app. It is that simple. The Sync E shows up like any other Tentacle Sync and you just add it.

Here you can change all of the parameters of the Sync E, including input gain, 32-bit float/ 24-bit recording,

When you are recording you also get a nice visual display of what is happening. While it is nice to be able to see the audio being recorded you can’t monitor it through the app on your mobile device.

The Track E is super simple to use and if you are working without a dedicated sound recordist it can be a real-life saver, especially for documentary, news, or event coverage where audio can be very unpredictable.

Having a timecode synced 32-bit float audio source being recorded to a small device that you can also monitor (as long as you are attaching a TX unit to the Sync E is super handy. It is also nice to know that the only monitoring you need to do is to make sure there isn’t wind noise or rubbing on clothes, etc. This means you can concentrate on shooting and not have to endlessly be worrying about levels.

The Track E also works well with microphones such as the Rode VideoMic NTG. For an interview scenario, you can plug the Rode into the Track E and then plug the headphone output into a Wireless GO. Yes, it does mean you have to plug two devices into the Track E, but the benefits arguably outweigh the inconvenience.

So what does the quality of a transmitted recording sound like? Well, that is going to depend on a lot of factors, including what TX units you are using and what camera you are recording to. What I can do, is to let you listen to the difference between an internally recorded audio file from the Track E, and the audio being that was recorded in-camera using the Rode Wireless GO TX and RX units. I am using the included lavalear microphone that comes with the Track E. No audio adjustments have been made.

I didn’t find there was a massive difference between the two recordings, but the internal recording did sound a little bit better.

The nice thing about 32-bit float audio recordings is that you don’t have to do anything special or process them with any type of software. You just bring them into your NLE and you are good to go.

I found in FCPX the easiest thing to adjust the levels of 32-bit files was to just put an Audio Gain effect on those clips and then make my adjustments.

I use Tentacle Sync Devices all the time for my work and I love how the Track E just fits seamlessly into that environment.

Not long after we saw the Track E being announced, Zoom unveiled its F2 Ultracompact 32-bit Float Portable Field Recorder. There are two versions of the F2 that are available.

The one that competes with the Tentacle Sync Track E is the F2-BT model which offers wireless timecode synchronization when used with an UltraSync BLUE device by Timecode Systems.

The Track E is a great little device that can come in very handy in a lot of situations. The app is very straightforward and intuitive to use. Pairing the Track E with other Tentacle Sync devices is super quick to do and it allows you to integrate the Track E into your ecosystem really easily.

The only real downside is that it would have been great to be able to either monitor or monitor/record directly on your smart device. What would be equally beneficial would be direct Bluetooth monitoring through headphones. I know I am asking for a lot! But if you don’t ask the question you will never get it answered.

The ability to be able to output a signal and not only monitor it, but also record it, along with being able to record a 32-bit float file internally to the Track E makes this an extremely useful device.