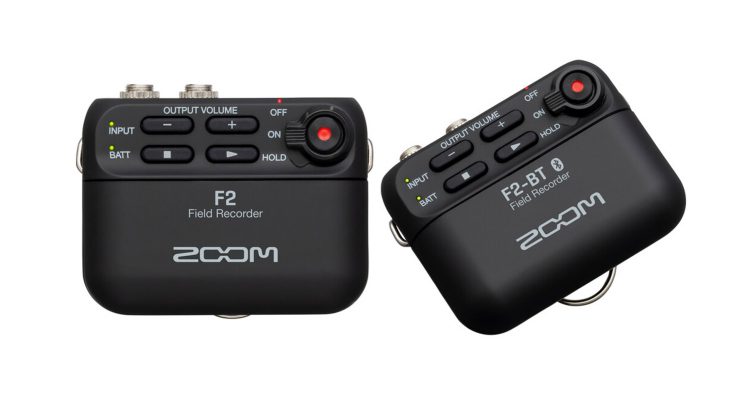 Zoom released today a new 32-bit ultracompact field recorder that comes in two models one with and without Bluetooth. Both F2 models include a lavalier microphone.

The big deal is the inclusion of 32-bit float as that prevents clipping and is easily fixed in post.

The F2-BT model is available to use with app-based control and wireless timecode synchronization when used with an UltraSync BLUE device by Timecode Systems.

The F2 is designed for belt-mount and is also pocket-friendly due to its small size. The Hold switch will keep it recording no matter what button you press.

The F2 includes a lavalier microphone and locking connector, a headphone output and onboard transport controls.
The files can be transferred to a computer via USB, then use the supplied Steinberg WaveLab Cast software to edit, enhance, mix, and export your audio.

Included is an omnidirectional polar pattern lavalier microphone with a 3.5mm locking connector. The omnidirectional polar pattern is designed to deliver consistent audio pickup from all directions, yielding dependable voice capture even as the subject turns their head or the microphone changes position. Also, three windscreens are supplied for easy reduction of light wind noise. Other brand 3.5mm lavaliers can be used.

The F2 utilizes 32-bit float recording technology to capture intensely loud signals without overloading the A/D converters and bring in extremely quiet sounds without overwhelming noise, all without requiring any gain adjustment from you.

The F2 boasts two high-quality recording resolutions to choose from—32-bit / 44.1 kHz or 32-bit / 48 kHz, both in mono uncompressed WAV format. No data compression means that no quality is lost in the creation of the audio files. Use the onboard 80 Hz low-cut filter to reduce rumble and bass buildup in your recordings.

While it hasn’t been stated by Zoom I’m going to assume the output on the US versions would be shut off while recording due to a US patent.

Maximize portability by recording directly to a microSD/microSDHC/microSDXC card (available separately) for up to 512GB of storage space.

The F2 can accommodate mic or line-level signals via its locking 3.5mm stereo mini-jack input. Since it supplies 2.5V plug-in power, you’re free to use common condenser mics such as lavaliers, headsets, and earsets.

A locking 3.5mm stereo output jack with dedicated volume up/down buttons enables straightforward routing to your camera, DSLR, secondary recorder, or even headphones for easy monitoring. (This feature may not be available in the US versions due to potential patent infringement)

The F2 Editor lets you adjust settings, format SD cards, and more from your Mac or Windows computer. Since the F2 has a USB Type-C port, simply connect it to your computer via a USB cable (available separately) and launch the editor. The USB connection also makes it easy to transfer files to your computer.

The F2 is equipped with a high-precision internal clock (±0.5ppm) to avoid audio and video syncing issues.

The new Zoom F2 and F2-BT look like a solid product and a reasonable price. The included lav is a nice touch if you dont already have one and 32-bit float is just icing on the cake. I have been using the Tascam DR-10L for a few years and it’s been great. Also, Tentacle Sync has a new Track E that records 32-bit float and has TC built-in, plus can be used with Tentacle Sync Sync E Timecode Generator with Bluetooth for multi-cam shoots. My review on the Track E will be out this week.