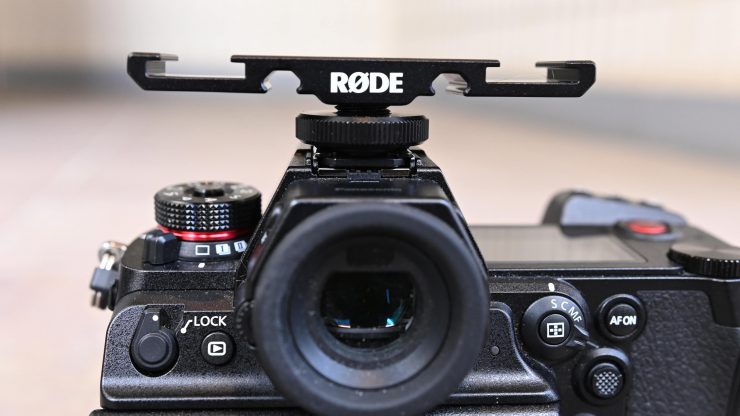 The RØDE DCS-1 was recently announced and I thought I would take a closer look at it.

The DCS-1 is a small dual cold shoe mount that lets you attach two accessories, whether they be microphones, on-camera lights, or even a lightweight monitor to a camera or any other device that has a cold shoe receptor.

The RØDE DCS-1 is constructed out of lightweight aluminum. It weighs in at 42.7g (1.5 oz). For a lightweight accessory, it is pretty well made. It is nice and sturdy and it doesn’t flex or bend.

What RØDE products is it compatible with?

Is it easy to use?

The DCS-1 is easy to use. There really aren’t any surprises here. This is a fairly simplistic mounting bracket, so I wouldn’t expect there to be any complications.

The tightening mechanism that locks the DCS-1 works as advertised and it allows you to get a nice solid connection between the DCS-1 and whatever you are attaching it to.

Most people buying a DCS-1 are going to be RØDE users who already have products such as the Wireless GO. The Wireless GO units feature a clip that also doubles as a cold shoe mount. This is a smart design because it allows you to not only use the one mount for multiple purposes, but it also allows you to attach and detach the Wireless GO quickly.

The only catch 22 with having a cold shoe receptor clip like this is that it is just as easy to take off as it is to put on. This means that because there is no physical locking mechanism, products like the Wireless GO are susceptible to getting knocked or moved around on the DCS-1. However, this isn’t a design flaw of the DCS-1, it is simply just due to the design of the cold shoe mounting clip on the Wireless GO. In saying all of this, it isn’t as if a Wireless GO is going to just simply slide out by itself.

I found I could easily attach a Wireless GO and a VideoMic NTG and then use the RØDE SC11. If you aren’t familiar with the SC11, it is a TRS Y-splitter cable that allows you to connect two mono 3.5mm outputs to a single stereo 3.5mm input. This cable is very handy for connecting two microphones to a camera that only has a single stereo 3.5mm input.

With this combination, I was able to have two separate audio tracks being recorded on the camera independently.

The great benefit of using the DCS-1 and the SC11 along with two separate microphones is that I can capture two independent tracks without having to resort to putting my camera in a cage. This lets you keep a small camera small.

One of the small minor complaints I had was that the SC11 cable is very thin and it doesn’t fit into the cable holder on the DCS-1. I would have preferred to have seen the SC11 cable in a coil style design like the cables that come with the Wireless GO. The SC11 cable does look a little bit like it was soldered up by someone in their garage. That’s not to say there is anything physically wrong with it, but it just looks that way.

I also tried the DC-1 with a Lupo Smartpanel on-camera light and a Wireless GO. This was also easy to do and allowed me to mount a microphone as well as a top light without the need for a camera cage.

My only real concern is I would be slightly worried about putting too much weight onto the camera body itself. I was using a Panasonic S1H and that camera features a built-in hot shoe. I wouldn’t want to damage that as it provides electronic communication from the Panasonic DMW-XLR1 to the camera.

You could attach a lightweight monitoring solution, however, I would be a little wary placing a heavier external recorder/monitor on the bracket. While it still may work with no issues I would rather be safe than sorry.

There are quite a few dual cold shoe mounting brackets to choose from. As I said earlier, the RØDE DCS-1 is nothing special or unique. Other options include:

The RØDE DCS-1 is a simple, effective way of mounting multiple components to your camera without having to use a cage. While there is nothing particularly special or inventive about the DCS-1 it does work well and if you are using a smaller sized mirrorless camera then it is certainly worth looking at, especially if you like to keep the size of your camera rig to a minimum.

The SC11 cable also works as advertised and when coupled with the DCS-1 and a few RØDE microphones it allows you to record two independent channels of audio without having to resort to using a portable mixer or XLR module. While it doesn’t offer the versatility of either of those two options, for some shooters being able to record two independent tracks without adding much additional weight to your rig is all they are looking for.