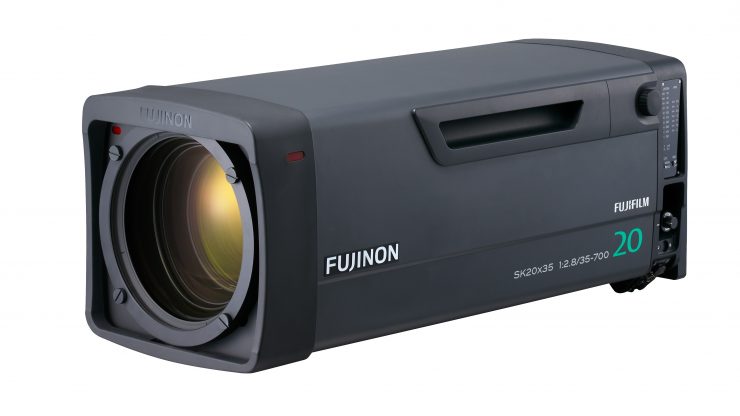 Fujinon is developing the SK35-700mm Telephoto PL Mount Box Lens. This is an interesting lens and it has been designed specifically for the multi-camera cinema-style production market.

A lot of multi-camera cinema-style productions either use native PL mount zoom lenses with motorized FIZ systems, PL servo zooms such as the Fujinon Cabrio series, or they adapt broadcast-style 2/3″ lenses or box lenses.

The Fujinon SK35-700mm Telephoto PL Mount Box Lens will offer an alternative to existing multi-cam cinema-style production solutions such as the ones I just mentioned.

To my knowledge, this is the first-ever PL Mount Box Lens. Up until now, Box lenses have strickly been designed to cover smaller sized sensors.

You could use the much smaller and lighter Canon CINE-SERVO 50-1000mm T5.0-8.9 lens to achieve a similar result, but that lens is quite a lot slower when it comes to the aperture. While that may not be a problem for outdoor events, for indoor applications such as concerts and sporting events the max aperture would be too slow.

The Fujinon SK35-700mm is being aimed directly at large multi-cam productions that want to use S35 cinema camera, but also need lenses that can cover a very large focal range.

There is currently no information as to when this lens will be available or how much it will cost.