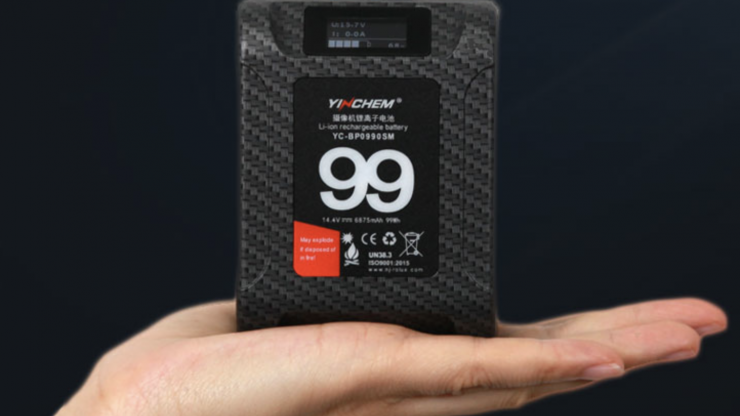 Yinchem has a new compact pocket-sized v-mount battery that I thought I would take a closer look at.

I can hear your thoughts already, oh no, not another battery review. It is true, there are a ton of batteries out there and most of them feature very similar levels of functionality, but with more choices, comes lower prices.

The battery market is certainly saturated and we have seen most manufacturers move to make higher capacity and smaller sized battery solutions. The Yinchem YC-BP0990SM is another battery that follows in that same direction

The YC-BP0990SM is a 99Wh 14.4V 15A battery that has been designed to power a wide array of broadcast and film equipment.

The battery is encased in a hard textured shell that is made to look like carbon fiber. I don’t personally mind the design, but at the end of the day it is just a battery, so looks don’t really matter.

There is a small LCD display on the battery where you can see all of the key information. This is similar to what is found on the FXlion Nano 2 batteries.

It weighs in at 530g, and although that doesn’t make it the lightest available option, it is still quite small and compact.

So how does the size and weight compare to some other available options? Well, below you can see:

As you can see, the Yinchem stands up pretty well when compared to other options on the market. Both the offerings from IDX and IndiPro are cheaper. The Yinchem is the same price as the FXlion Nanon Two.

The Yinchem features dual D-Tap outputs as well as two 5V 2.1A USB outlets. This is a pretty good combination, but it would have also been nice to have seen the implementation of a USB-C port.

The D-Tap ports are located on the sides of the battery and the USB ports are on the top.

I like compact-sized V-mount batteries. They are easier to travel with, add less weight to your camera or equipment and they usually have a couple of outputs for powering other accessories.

THe Yinchem battery works as advertised, and although nothing particularly stands out, it is certainly up to the task.

You can charge the battery off any V-lock battery charger. I tried it on quite a few different chargers and I didn’t encounter any problems.

As I have already mentioned the price of the battery is $279 USD. This is perhaps a little on the high side considering it is a from a company that probably not a lot of people outside of China have heard of before.

Reliability and long term usage are very much unknowns with this battery. I haven’t used batteries from this company before so I can’t honestly say how well they would hold up after a few years of use.

Not all batteries are created equal, even though on the surface they may appear to be. I don’t know who is making the actual lithium cells that are inside this battery and where they are being sourced from

In saying that, I didn’t have any problems with the Yinchem battery and it worked as advertised. It is lightweight, offers a good array of outputs, and most importantly it is reasonably priced compared to a lot of the other offerings that are available.

If you are in the market for an affordable, compact V-lock battery solution it is probably worth a look.