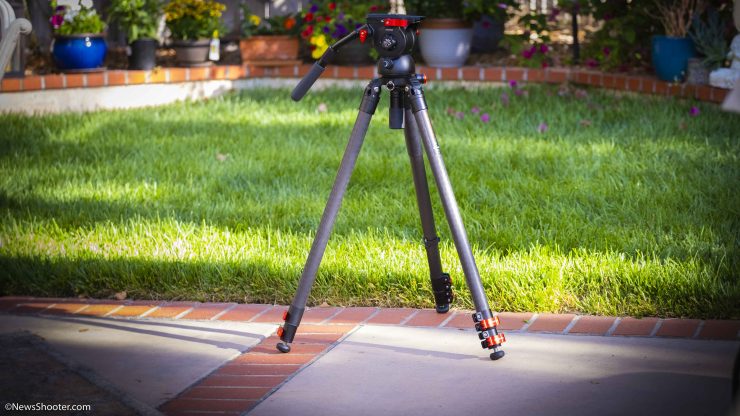 Tripods come in a lot of different configurations. I use both the heavy and stable 2-stage with a mid-spreader and the slim and light single tube style sticks that are popular with stills photographers. The iFootage Gazelle TC9 is a versatile tripod that can be used for both video and stills; however, its design favors the video side with a 75mm bowl for fluid heads. The Gazelle Series Tripods have a very cool ‘FastBowl’ system that I like a lot. The tripods are available in either aluminum or carbon fiber. The Gazelle TC9 tripod retails for USD 389.00.

All-around build quality is excellent. I tend to prefer carbon fiber over the aluminum models to cut down on weight. The TC9 carbon fiber sections are smooth and ridged. They extend very quickly. On the ends are rubber feet That don’t mar tile and wood floors. When the rubber feet are screwed up, an aluminum spike is revealed. The rubber feet are not removable, so they can’t accidentally fall off.

With some tripods like the iFootage TC7, the legs will push past the center point which could pinch your hand, with the TC9 the design has fixed that issue as it won’t go past to the center point. Your digits are safe!

The 75mm all metal bowl and upper collar are solid. Each section has approximately an inch of the tube inserted into the mount. The locking sections are also all metal. In fact, all the hardware except the feet is made of metal. I like that as it feels more durable.

The TC9 has two Arri accessory mounts on the collar. One 3/8-16″ and a 1/4-20″ tap. I love these! Mounting an arm, with a 1/4-20″ threaded screw just doesn’t hold. When you go to change the position of the arm, it usually loosens the main mounting point. The dual pin design of the Arri accessory fixes that problem.

The FastBowl features a unique, patented bowl head quick release system that makes attaching and removing the ball head very fast. You don’t have to screw the leveling mount all the way. Instead, it pops onto the threaded stud and locks on. With one rotation, the ball head is locked down. To remove, you rotate once and push the button to unlock. A very innovative design.

Something to note, the FastBowl system is reliant on you using the iFootage half ball adapter with it. I tried my Miller 75mm fluid head, and it doesn’t work. The mounting bolt isn’t long enough to lock on. This does limit the use a bit as you would have to use a flat base head with the FastBowl system.

I have a few twist-lock section tripods and now prefer the design of the locking clip better. The twist models do come loose over time and take a little longer to adjust. To level a leg with a clip lock, it takes less effort and quicker.

The TC9 uses a nice sized metal locking clip that is secure and relatively flush to the leg, so it won’t get snagged on something and be accidentally pulled and unlocked. The tripod comes with a tool to tighten the joint where the leg sections attach to the collar, as well as the clip locks. The tool clips around a leg section. I would keep it in my bag as it’s a nice addition and wouldn’t want to lose it.

The sections are on the longer side due to having two sections as opposed to a three-section leg. This could be a plus or a minus depending on how you use the tripod. For packing onto a backpack I feel it is a little too long and probably won’t fit in a suitcase.

The legs can be spread out in three positions for low shooting angles or leveling on uneven surfaces. The three stages are 22°, 55°, 77°. To release the section, you pull the clip on the upper portion of the leg. The clip holds in place and can be pushed in at 22°, 55° settings. At the 77° position, the clip auto-locks in place. Works as it should!

Without the 2-sections extended and in the first position, the TC9 is 26″ (660.4mm) tall to the top of the bowl. This is very similar to most 2-stage tripods with the mid spreader open. With both sections open, the tripod is very tall at 5′ 41″ (1650mm). That is one tall tripod.

The advantage of the no spreader design with single-leg tripods is the ability to go super low to 200mm or 8-inches. With the two-section model, the legs do come out a lot, but the tripod is solid with minimal bounce.

I like the iFootage Gazelle TC9 tripod. It’s a good value at $389 US and comes with the FastBowl design that makes adding and removing the fluid head very fast. The added anti-twist Arri Accessory mounts on the collar are very handy for a magic arm or other accessories. At times it’s better to not have a monitor attached to the camera if the shots do a lot of panning and tilting. It stays in place if connected to the tripod. I do this frequently, only with a clamp on the end attached to a leg section.

A small but appreciated touch is the firm foam cover on one leg section for carrying. It does help get a solid grip on the tripod while walking with it. Again the price is very reasonable, and the build is excellent and would feel confident in recommending the iFootage Gazelle TC9. The tripod is available from iFootage direct and should be hitting retails in July.

Here are a few other options in various price ranges for comparison.

iFootage has a new line of Magic Arms called Spider Crab. They feature a quick-release system on each end of the arm, making device changing fast. They have several mounting options such as Hotshoe, 3/8-16″, 1/4-20″, and Arri Accessory options.

The 3/8-16″ is a combo with a 1/4-20″ inside the larger screw. The 3/8-16″ is springloaded and mounts into the base for 1/4-20″ mounting. The Arri Pins also retract so it can be used with non-Arri Accessory taps. These just arrived and will have a review coming soon.