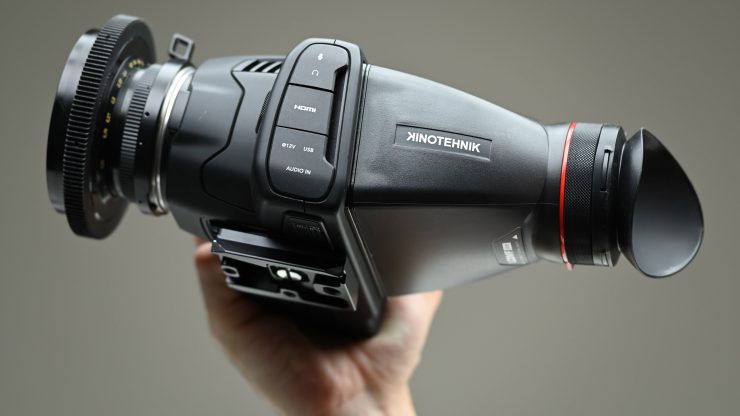 They also had a very good LCDVFe electronic viewfinder. This was one of the first affordable electronic EVFs that you could use on a variety of cameras.

The LCDVFe was my go-to viewfinder for the Sony F3 and the Sony FS700. I used it for years and years.

Kinotehnik has always made really great products so I was keen to test out its latest product, the LCDVF BM5 optical viewfinder.

The BMPCC 4K and 6K are good cameras, but let’s face it, the ergonomics and usability are far from perfect. Both cameras have a rear 5″ screen that doesn’t articulate or move, and on top of that, the screens are not bright enough to use outdoors. Unlike a hybrid mirrorless camera there is no viewfinder, so you cant hold the camera up to your eye and shoot.

The only option you really have with the Pocket Cinema Cameras is to either attach a daylight viewable monitor or try and rig up an external EVF. The other option would be to use a loupe of some description, and that is where Kinotehnik comes in.

Now, Kinotehnik is not the first company to make a solution for the Pocket Cinema Cameras, and they won’t be the last.

The new LCDVF BM5 optical viewfinder is a slightly more refined and better-built version. It also features more magnets and secures more firmly to your camera.

According to Kinotehnik, the seals of the viewfinder are resistant to splashes of water and dust when attached to the back of the camera, keeping your view of the LCD clean and dust-free.

The viewfinder is well made and solidly constructed. I don’t have any concerns over the build quality of the LCDVF BM5.

You can see that on the back of the frame there are 6 magnets that are used to hold the loupe.

To use the LCDVF BM5 you need to first attach the adhesive-covered thin metal frame to the back of the BMPCC 4K or 6K. This is relatively easy to do, but make sure you take your time and do it correctly. If you try and rush it you may end up placing it in the wrong spot.

The nice design aspect of the frame is that it has a little corner lip on it so you can remove the frame if you no longer need it anymore.

Once the frame is in place and you have allowed it to bond correctly, you then attach the optical viewfinder to the metal frame via a magnetic interface. This allows you to take the viewfinder on or off very quickly. Because it matches magnetically, you won’t get any unnecessary wear and tear on the camera.

Once the optical viewfinder is on it dramatically increases the overall size and appearance of the BMPCC 6K. You are effectively doubling the footprint of the camera once you add the LCDVF BM5.

The magnets are very strong and as you can see I can hold onto the loupe and it still supports the weight of the camera. Now, I wouldn’t recommend you do this. I did it just to test the strength.

The LCDVF BM5 uses a computer-optimized achromatic lens pair that Kinotehnik claims are designed to correct for chromatic aberrations and to provide maximum sharpness, edge-to-edge.

What is a nice feature is that the viewfinder has a 180° flip design so you can flip the viewfinder/eyecup so that it correctly wraps around your leading eye.

When you look through the optical viewfinder you will see a 2x magnification of the 5″ LCD Screen. In a nice touch, you can also add optional 46mm diameter diopter correction lenses if you need to adjust it past its standard range.

The optical quality of the LCDVF BM5 is good, but there is no in-built diopter correction lens. As I wear glasses I found that it wasn’t sharp for me. I definitely need the diopter.

Things you need to be aware of

Now, as it is using glass that magnifies the image you need to be very careful when using it outdoors. If direct sunlight goes through the viewfinder you will end up burning your screen.

I would have liked to have seen Kinotehnik include some kind of eye cover that you could use to prevent this from happening. Here is where they should g¥ve taken notes from Zacuto, who include an eye cover with their Blackmagic Pocket Camera Z-Finder.

The other two issues are internal reflections and no access to the touchscreen interface on the camera.

What I found is that there are internal reflections that bounce off the viewfinder and they do appear as light patterns. While some people may not find this a problem I did find it a little distracting. By turning down the brightness on the screen you can reduce reflections, but you can’t eliminate them completely.

The other obvious problem is that when the loupe is on you can’t use any of the touchscreen functionality. This does mean that you need to keep taking it off every time you need to make a change that can only be done via the touchscreen.

You can actually also put the viewfinder on the back of a SmallHD Focus HDMI monitor or the Blackmagic 5″ Video Assist. This makes it a nice option if you want to use one of those monitors as defacto EFV with a camera that you may own.

I couldn’t test how the Kinotehnik worked with either of these products as I don’t have access to them.

The usability of the BMPCCs is not good to begin with, so does the LCDVF BM5 help to improve it. Yes, and no.

While there is no doubt that the LCDVF BM5 makes it a lot easier to get critical focus and see your images outdoors, it can’t overcome the inherent design problems of the BMPCC cameras. As the cameras have fixed screens that don’t rotate, tilt or move in any way, the loupe is only really useful if you are shooting handheld with the camera up to your eye or if you have the camera at your eye level when on a tripod, etc.

The loupe is quite long and I usually like to brace my arms against my body when using a viewfinder on a small camera. While the Kinotehnik does provide another point of contact when shooting handheld your arms are going to be quite a long way out in front of you.

The BMPCC cameras really are a catch-22 product. While they offer good image quality at an affordable price, the trade-off is that they have poor battery life and usability. To cover all of your bases you really need both a loupe and another monitor. Perhaps the smartest solution would be to put the loupe on a SmallHD Focus monitor or a Blackmagic 5″ Video Assist. That way you get the best of both worlds. The caveat to doing this is you substantially increase the size of your rig and you have to use a cage and other mounting equipment to do it.

One of the added benefits of using the LCDVF BM5 is that you can set the brightness of the screen on the Blackmagic Pocket Cinema Camera to 10% instead of having it at 100%.

By reducing the screen brightness you can gain around 20% more battery life. Anyone who has used a BMPCC 6K will appreciate getting an added 20% out of a battery!

There is only a few other optical viewfinders for the Pocket Cinema Cameras that I know of. One of those is the Zacuto Blackmagic Pocket Camera Z-Finder. I might be wrong, but I believe this is designed to work with the original BMPCC 4K and not the BMPCC 6K.

However, one of our readers, Sarah Euschen has come up with her own solution by adopting the Zacuto viewfinder to work with the BMPCC 6K.

Another option is the QV-1 LCD View Finder for BMPCC, but again, just like the Zacuto it is only designed to work with the BMPCC 4K. It costs $79 USD.

Just a few weeks ago we featured the GlareGuard for BMPCC cameras, but that is not an optical viewfinder, it is a sunshade that attaches magnetically to a metal frame that is attached to the camera. While this will work in certain scenarios it isn’t going to completely solve the problem.

The Kinotehnik LCDVF BM5 optical viewfinder, at least to my knowledge, is the only purpose made viewfinder that will work on the BMPCC 6K without modifications.

While it does do its intended job and the build quality and magnetic attachment are good, I would have liked to have seen a built-in diopter as well as some kind of eyepiece cap.

It is hard to make a good third party loupe for a camera because you are somewhat limited as to what you can do with a non-moving 5″ screen.

If you do shoot a lot of handheld content with a BMPCC and you don’t want to add an external monitor then an optical viewfinder does make a lot of sense.