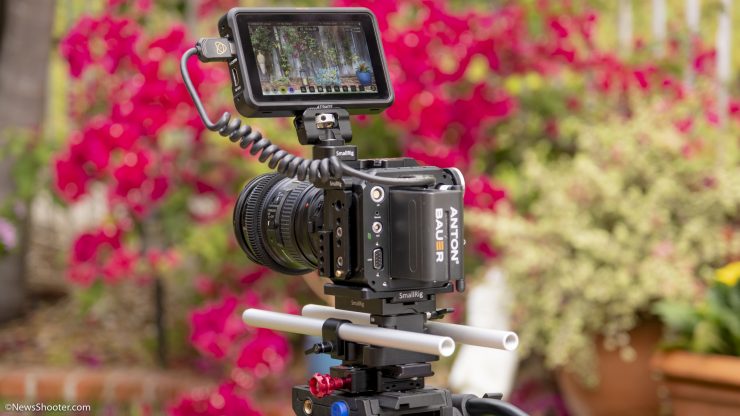 Today Atomos has announced that the Z Cam E2 can now record ProRes Raw over HDMI with the Ninja V. Both the Z Cam E2 and Ninja V are using beta firmware when this post was written. While the Ninja V firmware is not finished yet I did get a sneak peek of the combo with the beta software and it’s very interesting indeed.

The Ninja V will record 12-bit Apple ProRes RAW at up to 4Kp60. This will give Z CAM E2 users the best possible image quality from the camera. More frame rate options will be added in the future. For reliability and affordability, files are recorded to AtomX SSD mini SATA drives in the Ninja V.

Why Use ProRes Raw if The E2 has Z Cam Raw?

The E2 has excellent onboard codecs already so why would you want to use an external recorder to shoot with ProRes Raw? For one if you want to shoot Raw and already edit with FCPX’s workflow it’s a good option. Personally I don’t shoot Raw or Log all the time as I feel the extra room log gives only helps with a high contrast scene. If the lighting is even or somewhat flat the benefits are minimal and you just make the editing process more difficult. When shooting outside in the sun it can save your bacon! I do like the 12 bits of ProRes Raw.

Z Cam does have its own flavor of Raw as well, however, the workflow is a little cumbersome since you have to use Z Cam software that is only Windows compatible at this time and do the Raw conversion first before exporting to your NLE of choice. This isn’t my preferred workflow at all as I might change my mind and want to make changes to the parameters of the Z Cam Raw file.

I Got a Preview

Atomos was gracious enough to send me the beta firmware for both the Ninja V and Z Cam E2 to take it out for a spin. While some functions are not working correctly yet ProRes Raw capture worked perfectly without issues. We are dealing with beta software on both devices so I didn’t expect everything to be working as it should, however, it does give us a glimpse into what is coming and bugs are always going to be present and features not activated.

The waveform monitor wasn’t working in the beta firmware on the Ninja V, so I used false color. I think it’s a better option as you can see the areas of the image that are potentially blowing out. Raw is very powerful, but if the highlights are blown they won’t come back in post. It’s important to get a good exposure when shooting Raw and all cameras are different so it’s a little trial and error

Exposing for ProRes Raw with the Z Cam E2

Exposing for ProRes Raw is going to be different for each camera used. I asked Z Cam’s Kinson Loo if using the same exposure method for ProRes Raw would be the same as with Zlog2 and he stated that for now, it’s hard to say as some changes are going to be made before the full release. With that, I did follow the Zlog2 guideline and got very good results. Below are some guidelines from Z Cam’s Jason Zhang.

1. Zlog2 curve exposure middle grey to 40% and leaves 7 stops above. So you have plenty of headroom for overexposure.

2. Don’t underexpose. No matter in what condition you can always roughly check this. Skintone should be set for 40%-70% range and middle grey 40%. Underexpose will cause more noise and very difficult to rescue. We have enough headroom for overexposure. Please try to experimenting with overexposing before real shots! Zlog is about 1/8 exposure comparing to 709 which is 3 stops less.

3. Log curve is difficult to overexpose, so please don’t trust your eyes. Waveforms and false color tools are not difficult to learn. When you spent half an hour to learn and practice, you will feel very confident to shoot outside.

4. Exposure and WB are more important than color. If you do the workflow right, as long as your exposure is right, the color is right.

The above is good advice but I would also add that it’s important to not blow your highlights. Below is a sample of a shot that is overexposed and the sky is unrecoverable as it went well over 100 IRE. While it’s blown out it’s not shifting in color. The blown-out area is bright white. If I had exposed this to save the highlight the rest of the image would still be very workable.

Had I protected the highlights this shot would be sweetness. 😀

The above shot was exposed just right with no blown highlights. The image is very nice and the colors are just beautiful. Using False Color is a very good tool once you get used to using it, and on the Ninja V, it’s great. It has the IRE color values on the left side for quick reference.

Atomos and Z CAM are also announcing the development of touch-screen camera control on the Ninja V for E2 cameras. This feature is popular with the PortKeys BM5 monitor and is now going to be added to the Ninja V.

You will be able to operate the camera and adjust its key settings from the Ninja V’s AtomOS touch screen. A new camera icon appears next to the record and playback functions. I think this added functionality alongside ProRes Raw recording makes using an external recorder a good option. Frankly, you need a monitor with the E2 anyways and the ease of editing ProRes Raw inside of FCPX makes a compelling case.

Another advantage of using the Ninja V to record with is not having to mount an external SSD drive to the E2. Again you already need a monitor and now you have both in one.

ProRes RAW is fully supported in Final Cut Pro X as well as other NLE’s such as ASSIMILATE SCRATCH, Colorfront, FilmLight Baselight, and Grass Valley Edius. Adobe and Avid have announced that Premiere Pro and Media Composer will support ProRes RAW this year.

Z CAM is the third camera company to have support for RAW over HDMI, joining the Nikon Z6 and Z7 and the Panasonic S1H. This is in addition to several Sony, Canon and Panasonic cinema cameras that already support ProRes RAW recording via SDI to Atomos monitor-recorders. Atomos states more supported cameras are coming this year.

ProRes Raw is two years old now. With the advancement of Raw over HDMI it opens up a lot of potential for the Ninja V and we will see more cameras using it in the future. It is a very powerful format and opens up higher quality options for the inexpensive hybrid market. Those cameras generally have weaker codecs than the edit-friendly ProRes files.

The E2 is an interesting camera to get ProRes Raw as it already has ProRes internal. It says a lot about a company that offers the consumer options, even when they have their own internal Z Raw format. This is something I like about Z Cam as a camera manufacturer.

I do look forward to the camera control functions that Atomos is working on as the E2 requires an EVF or monitor to operate the camera. Having camera control just makes using the Ninja V even more valuable to the setup.

The new features will be available for free from Atomos and Z CAM in early Summer 2020.

Well, we have it! Check out this excellent article by Ben Allan ACS CSI, also my buddy Lee Herbet is doing a seminar HOW TO WORK WITH PRORES RAW on Post Production World, May 18th at 5:00 pm – 5:50 pm EST.

The below video is also a good primer for the workflow.