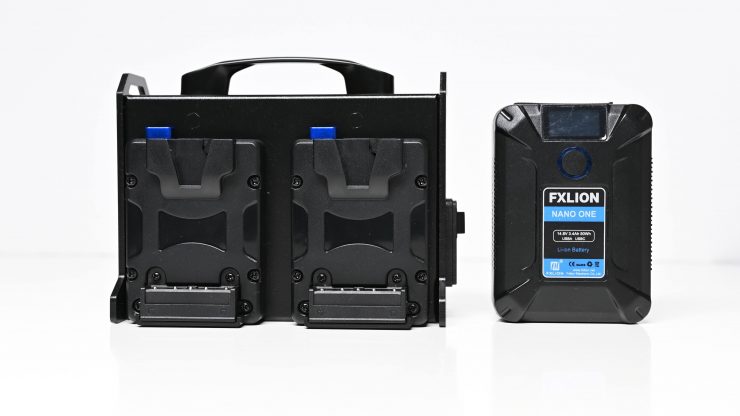 Now that they are shipping I have managed to get hold of one to put through its paces to see how it performs and if there are any caveats due to the small size.

This certainly does make it extremely compact and portable, and perfect for anyone who is traveling with Mini V-Lock batteries.

FXLION claims that it is the World’s smallest quad V-Lock battery charger, and from my research, I couldn’t find any other quad chargers that were smaller or lighter.

Below are what some of the competing small-sized quad V-lock battery charges weigh:

As you can see, the FXLION is significantly lighter than the Hawk-Woods and Dynacore options. The bebob VS4micro comes the closest, but none of the competing chargers are under 1kg.

You would expect a small, lightweight, compact quad battery charger to be made out of lightweight materials, but the FXLION charger actually feels pretty robust.

The V-mount plates are solidly made and they feature a very robust battery release mechanism. I don’t have any concerns about the battery charger.

I like how the FX-NANO4S has been designed. It sits nicely on a desk or the floor and FXLION has incorporated a nice little carrying handle on the top as well as large eyelets if you wanted to use something to attach it to a piece of equipment or anything else.

It has a simple on/off power switch.

There is no indicator screen, instead, you have two lights that illuminate to show you the status of CH1/CH2 and CH3/CH4.

I always find myself charging batteries that are different. Some may be completely dead and some might still be at say 30%. Without having an individual indicator for all four batteries, you need to physically check each battery individually to know if they are charged or not.

On FXLION Mini V-Lock batteries such as the NANO ONE and NANO TWO, they have a digital display, so you can just look at those to see the charge progress. If you are using another brand of mini V-lock batteries you may not get that luxury.

Having simultaneous charging on a compact quad charger is a big deal. Being able to charge four batteries at once, means you can just set and forget, which after a long day on location is something you want to do. There is nothing worse than having to get up in the middle of the night to swap over batteries.

Now, there is a catch. If you charge four batteries simultaneously the charging current is just 1A. If you are charging a single battery or two batteries (one battery on CH1 or CH2 and one on either CH3 or CH4) then they charge at 2A.

So what does this actually mean? Well, if you are charging four batteries simultaneously it is going to take longer than charging one or two batteries.

For example, the large FXLION Quad-channel V mount Quick charger PL-Q480B is able to provide 4A to each individual charger.

The time it takes to charge four FXLION NANO TWO (100Wh batteries) is around 420 minutes. That is a whopping 7 hours! If you are charging two batteries simultaneously then that figure drops to 3.5 hours.

In comparison, the much larger FXLION Quad-channel V mount Quick charger PL-Q480B can charge four 100wh batteries in 2.2 hours. There is definitely a trade-off you need to make between charging time and the size and weight of the charger.

Above you can see a comparison between how many amps are supplied to each channel of competing mini quad chargers.

The FX-NANO4S is not a ‘fast charger‘ by any stretch of the imagination. You need to factor this in if you are considering one. If you are putting batteries on charge at the end of the day then it won’t be a problem to have them ready by the next morning. But, if you need to put four batteries on charge and have them ready to go within a few hours this isn’t the charger for you.

The FX-NANO4S does feature a fan and that fan does create quite a lot of noise. Most V-lock or AB Gold Mount battery chargers also have fans, and most of them also make quite a bit of noise.

You just need to be aware of the noise if you are using the charger at night in a hotel room, because if it is too close to where you are sleeping it may keep you awake.

I personally try to put chargers in the far corner of the room or in the bathroom when I am traveling. I hate the noise of bar fridges, so battery chargers are normally no better!

Can you use non FXLION Mini V-Lock batteries?

Yes, you can, however, FXLION says that you will void your warranty if you do.

FXLION makes the NANO ONE and NANO TWO Mini-Vlock batteries which this charger is designed specifically for.

I tried charging other mini V-lock batteries on the charger and they all worked without any problem.

The FX-NANO4S retails for $249 USD. How does this compare to the competition?

The FX-NANO4S is well priced given its capabilities.

There are a couple of alternatives to the FXLION such as the Hawk-Woods 4-Channel V-Lok Simultaneous Charger for V-Mount and MINI-VL Batteries. It retails for $662 USD. The advantage the Hawk-Woods has over the FXLION is that it is a 3A charger and it can charge four batteries in a lot less time.

The caveat is that it weighs in at 1.86kg and it is physically a lot larger and more expensive than the FXLION.

It can charge regular-sized and mini V-lock batteries.

Another alternative is the DT-4S Dynacore Mini V-Lock charger. The batteries charge simultaneously at 1.5 amps. If you only charge one battery, it goes to 3 amps. Charger and adapter functions can be used at the same time. It weighs in at 1.30kg and costs $240 USD. It can charge two full sized batteries or four mini V-lock batteries .

There is also the bebob VS4micro, which is a 16.8V / 1.25A quad charger. It weighs in at 1kg. It can charge full-sized and mini V-lock batteries and it retails for $575 USD. bebob lists that it can charge bebob, IDX, or Sony batteries.

If you don’t want to use a quad battery charger there are other mini V-lock batteries out there that you can charge through direct D-tap wall chargers or via USB-C. While these work well, you need a separate charger for each battery and these methods don’t tend to be the fastest when it comes to charging.

With battery chargers, you can’t have your cake and eat it too. There is always going to be a trade-off between size, weight and charging time. With the FXLION quad charger, there are definitely caveats that you need to be aware of before purchasing. While it is significantly lighter and smaller than any of the other chargers, it is going to take longer to charge your batteries.

If you are on the road and travel a lot and you only primarily need to charge batteries at the end of a shooting day then it makes for a compelling option. It is also small enough that you can take it on shoots during the day and then plug it in on location (if you have mains power) and charge batteries while you are shooting. Yes, you are unlikely to have them fully charge while you are on location, but you at least get a head start on the amount of time needed to fully recharge them once you are back at the hotel or home.

Given how light, small, and inexpensive the charger is, you could buy two of them and charge up to 8 batteries at once or put two on each one for faster charging.

In fact, if you are traveling to remote places it always makes sense to take a back up battery charger because you may well be in an environment where sourcing a replacement is not possible.

The charger certainly works as advertised and it makes for a very affordable and travel-friendly option if you are looking for a compact and lightweight quad battery charger.