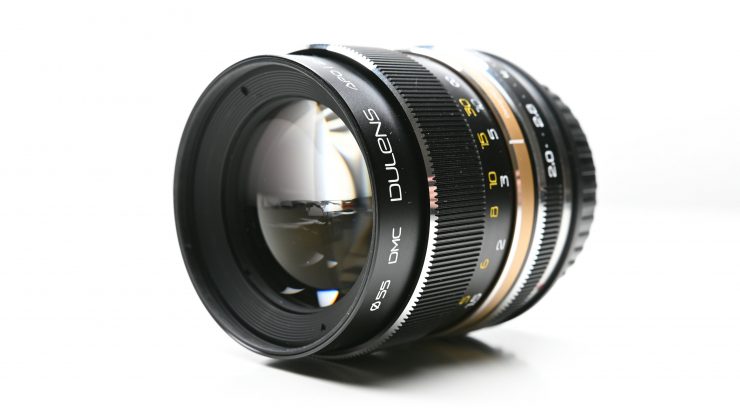 The DULENS APO 2/85mm is the first in the series from a new company in China. This is a stills line of lenses with plans to create cine versions down the track.

We have been told that the creator of the DULENS APO 2/88mm is the same optical engineer who was involved with the NiSi F3 & MAVO Primes. If you browse the store’s other products, they also have the MAVO primes listed.

The lens comes in a very unassuming cardboard box.

Inside, you get the lens, a lens cap with a lanyard, a pouch, and a cleaning cloth.

For a relatively ‘affordable’ full frame lens, the 2/85mm is nicely made. The lens uses an all-metal construction and all the markings are well laid out.

The iris is de-clicked and it really nice and smooth. The focus ring isn’t quite as smooth and it does make a little bit of noise when you are using it.

I like that there is a nice, large focus barrel, as it makes manual focusing easy to do. The lens also has a decent amount of focus throw which is also nice.

What you need to be aware of is that the front of the lens extends when you are focusing. If you are using the lens with a matte box this could be a problem.

The front filter diameter is 55mm so you can use variable ND or other filters with it.

For its price, the build quality and construction are very good.

The lens is really small, and in a lot of ways, they remind me of a Voigtlander.

What’s interesting about the lenses is that they are very compact at 5.8cm (2.28″) long but they have a large Ø46.5mm image circle, which can cover full frame.

The lenses are said to be inspired by the classic ZEISS SONNAR series.

The lens tipped the scales at 395g when I weighed it.

As the name suggests, it features an Apochromatic element to minimize chromatic aberrations, even when wide open at F2.

The lens is certainly nice and sharp, even when used at F2. The sweet spot for the lens in terms of sharpness is around 5.6/8. If you look at 300% crops of the image, the sharpness still holds up incredibly well.

The bokeh is reasonably nice. While not completely circular when used wide open, the lens is still capable of producing pleasing bokeh.

I couldn’t see any real glaring noticeable signs of chromatic aberration. Even wide open at F2 there was only a very tiny amount.

The lens does have quite a bit of focus breathing, but it is a stills lens and not a cine lens, so that was expected. In saying that, it is not overly distractive.

I didn’t find the flare to be very appealing at all. In saying that, the lens retains pretty good contrast. Flare is a very subjective thing, I just personally didn’t like how this lens deals with lens flare.

The lens is quite nice to use and its compact size makes it a good choice for use on smaller sized digital cinema cameras or mirrorless/DSLR set ups.

The lens is nice and sharp and it produces reasonably nice bokeh. It also doesn’t show any signs of chromatic aberration. Above you can see some footage taken with the lens. The 85mm is quite nice to use and because it has quite a large focus throw for a stills lens you can pull focus quite easily.

Above you can see what the lens looks like when used on the Kinefinity MAVO LF in full frame 6K. I did a couple of quick shots shooting a subject who was heavily backlit wide open at F2. The lens produces nice bokeh, but I don’t get that much sense of depth. The fall-off between in focus and out of focus areas is quite sudden and not as soft or subtle as I personally like. In saying that, the images still looks pretty good and you can certainly obtain nice results.

The lens is being listed for ¥3,099 which is currently around $450 USD. There are further discounts for pre-ordering as well. They plan to release the lens in US/Europe with a retail price of $599 USD.

We are working on getting more information on the lenses and the line-up.

If you want faster 85mm prime lenses there are options such as the ZEISS Planar T* 85mm f/1.4 ZE Lens for Canon EF.

The DULENS APO 2/85mm is a pretty good lens for the price, but I would be hesitant in purchasing a prime lens where there are no other focal lengths available. If you are going to purchase a prime lens you are probably going to want at least 3 focal lengths. I would hold off until DULENS releases more focal lengths. I reached out to DULENS and they do have plans to make a complete set, although there is no time frame for when this will happen.

The lens is well made and offers good results. It is sharp, produces nice bokeh and it is easy to operate and use. There is nothing in particular that makes the lens stand out in any way, but it is a solid offering from a new lens company.