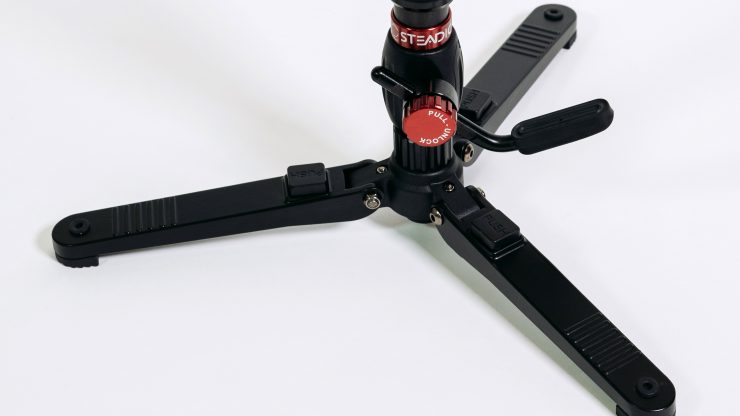 The kit includes three stands, a silver reflective Totabrella, and a white silk Tota-brella in a custom soft case. The new Tota lights have a claimed CRI of 96.3.

The lights are daylight balanced LEDs (5600K) with a claimed output equivalent of a 750w tungsten fixture with flicker-free dimming from 100-0%.

A custom case stores the fixtures and all accessories with internal dividers for transportation or shipping, including room for spare accessories, an additional zippered compartment, and a padded shoulder strap.

The Steadicam Air gas-powered monopod now has a new base accessory option with Steadicam AIR Spreader, which offers additional support and balance to users without sacrificing speed or compatibility.

The Steadicam AIR Spreader is a foldable, screw-in, 3-leg base option for the
both the Steadicam AIR 15 and AIR 25 gas-powered monopods. The AIR Spreader increases the overall stability of the monopod while offering the potential for more comfortable operation depending on the application.

The Steadicam AIR maintains its functionality with rapid deployment and gas-powered lift assistance with either base option.

It can be installed in under a minute by simply unscrewing the post that connects the standard rubber foot at the bottom of the monopod and screwing the AIR Spreader into its place.

Once attached the AIR Spreader’s legs can fold up to be packed in the standard Steadicam AIR carrying case without removal.

Based on customer feedback, Tiffen has introduced lower-powered +1/8 and +1/4 full field diopters for use with anamorphic lenses and older vintage lenses among others. The increased desire for productions to use interesting lenses has driven the need for close focus diopters that provide a small amount of focus adjustment with no distortion. These new Tiffen diopters join the existing family to offer filmmakers and videographers complete creative control.

The lower-powered diopters subtlety extend the focus capabilities of lenses,
especially popular anamorphic and older spherical lenses, without distortion, allowing the camera to move closer to the subject and creating more intimacy and drama in a scene. They also create a shallower depth of field to isolate subjects and remove unwanted background elements.

The new +1/8 and +1/4 diopters share a uniform 138mm diameter, allowing them to work with standard accessories like matteboxes and diopter holders, and matching the existing Tiffen family of diopters that includes +1/2, +1, +2, and +3.