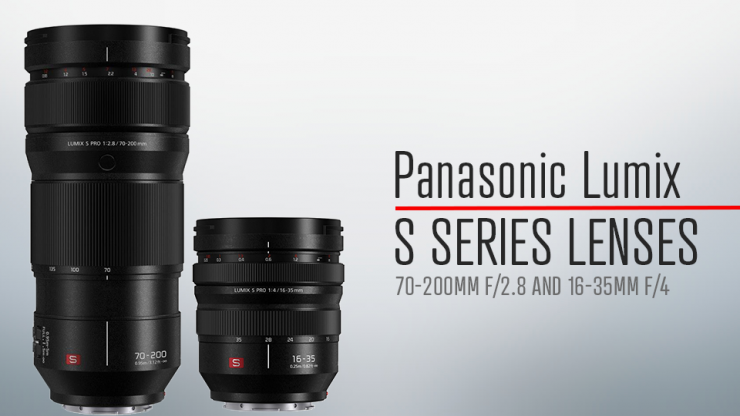 The lenses are designed for professional use, completing the trio of Lumix S PRO zoom lenses, joining the 24-70mm f/2.8.

Panasonic said they are designing and developing 11 or more lenses by March 2021.

Currently, a total of more than 46 interchangeable L-Mount lenses are available or will be available from Panasonic, Leica Camera AG and Sigma.

The LUMIX S PRO 70-200mm F2.8 O.I.S. (S-E70200) is a large-aperture telephoto zoom lens that boasts high descriptive performance across the entire zoom range. It is designed and developed for professional field shooting.

Astigmatism is also corrected with an aspherical lens, achieving high resolving performance. Adoption of a double focus system suppresses fluctuation of aberration even at close distances, which results in high descriptive performance from the center to the corners over the entire zoom range despite its large aperture.

The filter size is 82 mm, with an 11-blade circular aperture diaphragm.

The LUMIX S PRO 16-35mm F4 is comprised of 12 elements in 9 groups, the use of 3 aspherical lenses, an ED (Extra-low Dispersion) lens and a UHR (Ultra-High Refractive Index) lens.

For the AF actuator, a double-magnet linear motor is integrated that enables fast, high-precision autofocus.

The filter size is 77 mm, with a 9-blade circular aperture diaphragm.