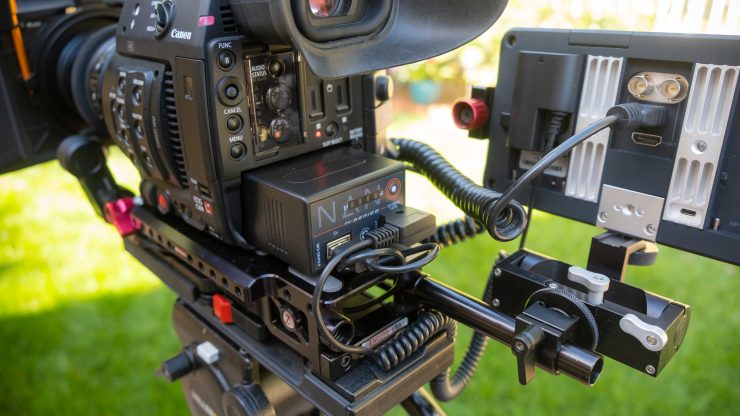 When I first saw the new Core SWX NANO-C98 battery, I told Core SWX “where has this battery been hiding!” For some reason, aftermarket batteries for Cinema EOS cameras are not as available as other cameras like the Sony FS7.

Well, this isn’t the case anymore, and Core SWX has a 3rd party battery alternative available now for the C200, C300 MKII, and C500 MKII cameras.

The NANO-C98 is a little longer than the OEM Canon OEM BP-A60 but not by very much. The added inputs don’t seem to take up much room. I like the power input placements on the battery. Having the inputs on the side can be challenging, with cable connectors sticking out.

Adding extra kit that requires power can be a struggle if you use smaller, lighter OEM batteries. The advantages of OEM is they are light, compact, and last a good long time. The Canon OEM BP-A60 batteries are solid. As I mentioned, if you have a kit that uses batteries or requires power like a wireless follow focus or monitor, you will either have several different types of batteries or figure out how to replace the battery the OEM option with a larger V-Lock. This requires a cage, some rails, or baseplate to achieve, and it could get messy really fast.

With the NANO-C98, you get a P-Tap that delivers the full output of 14.8 volts, so it is capable of powering a monitor, light, and other devices that fall into the 14.8v output range of the NANO-C98. The P-tap is also a smart connector, so it passes the battery data to compatible devices like the amount of charge left. The SMBUS/smart battery data is part of future integration.

The battery pack also has a 5v USB output. This is perfect for powering the Tilta Nano follow focus system. The motor on the Tilta Nano requires 5v USB power. The USB is versatile due to the 5V output it can power and charge a lot of devices.

A great feature is the NANO C98 can be charged with the OEM Canon charger. Not having to purchase another charger is a big plus. The NANO-C98 also can be charged with a Core SWX PB70C15 D-Tap Wall Charger directly into the P-Tap. I’ve also used a double D-Tap travel charger from other brands that work very well.

To check on the batteries remaining power a 4-stage LED gauge is also on the top. CORE SWX really packed a lot of features into this battery.

With the added P-tap and the ability to use the Canon, OEM charger will make the Core SWX NANO-C98 a good choice for Cinema EOS users looking to power more than just the camera. I have had this issue when using a follow focus motor.

I got three hours and five minutes of continuous record time. That’s impressive! The SmallHD 702 Bright backlight was set to 40 per cent. The monitor showed 8.2v consistently and the power left indicator on the C200 seemed to be accurate.

I did run into one issue when powering the monitor. When the C200 showed approximately 13 minutes left, the camera abruptly powered down while recording. Usually, the tally light will start blinking to warn you that the power is getting low around the 5-minute mark. This does concern me. As I mentioned, I was recording when the camera powered down; fortunately, the C200 was able to repair the clip.

I reached out to Core SWX and they told me what is happening is the camera is used to having a battery attached without auxiliary power outputs. When a device is connected and drawing off the battery the communication platform cannot compensate for it fast enough.  So when the battery pack says 13-min. remaining it doesn’t compensate for the voltage reduction that the monitor draw is putting on the battery.  Once the battery hit’s the low voltage threshold of the camera regardless of % communicated, it will shut the camera down.

The best way to manage this is by knowing that when powering external devices, the cut off time will be approximately 13-min rather than the 5-min warning to protect against sudden shut down of the camera. While it’s not ideal, it is a solution.

As for other options, the OEM Canon BP-A60 at $429 battery is an obvious choice if you don’t want to power other devices. For batteries with D-Tap’s, I found two other 3rd party batteries, however, I haven’t tested these and they use the D-Tap to power the camera via the AC input. Both have a USB output.

I like the Core SWX NANO-C98 battery a lot. I do wish I didn’t have to time out the end of the batteries life to avoid a shutdown, but I figure If I can get 3 hours of use from one battery and swap it out around 13-min. mark to avoid the issue, it still makes it easier than using a few other types and dealing with charging yet another type of battery. With three Core SWX NANO-C98 batteries, I would be set for a solid full day of shooting.