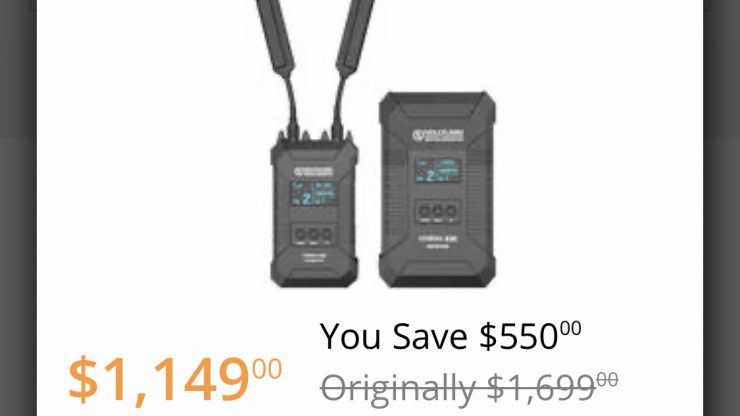 This is a pretty good deal if you have been looking for a wireless video system with a decent range.

The Hollyland COSMO 600 allows you to transmit an HDMI/SDI signal up to 600′ to an HDMI or dual SDI outputs. The transmitter/receiver set supports up to 1080p60 signals with a latency of <1 ms. The transmitter also offers an SDI loop-through out and 3.5mm stereo audio input. The system operates on the 5.1 to 5.9 GHz frequency band and uses AES-128 encryption for secure live delivery of your video. Other features include an OLED screen on both units, timecode, and automatic synchronization with camera recording.

The transmitter and receiver both feature an L-series battery plate. Additionally, D-Tap to LEMO cables are included for powering both devices off compatible batteries. The transmitter uses two antennas while the receiver has a built-in antenna. Three highly flexible antennas that are less disposed to accidental damage are supplied for the transmitter, one as a spare, and two mushroom antennas are also provided as replacements for the standard ones.

Erik reviewed the Hollyland Mars 300 Wireless Video System back in May and here is what he had to say: The Hollyland Mars 300 is an inexpensive wireless video system that works very well and punches above its weight. At only $499 USD it’s a nice piece of kit to have when cables are getting in the way. Not having to be connected to a monitor is incredibly liberating for the DP as well as the director, producer or anyone that needs to see what you’re shooting. Yes, the latency is a little distracting for dialogue or for pulling focus but at this price point, it’s not surprising. If you need to have super low 1ms latency expect to pay more than double compared to the Mars 300.