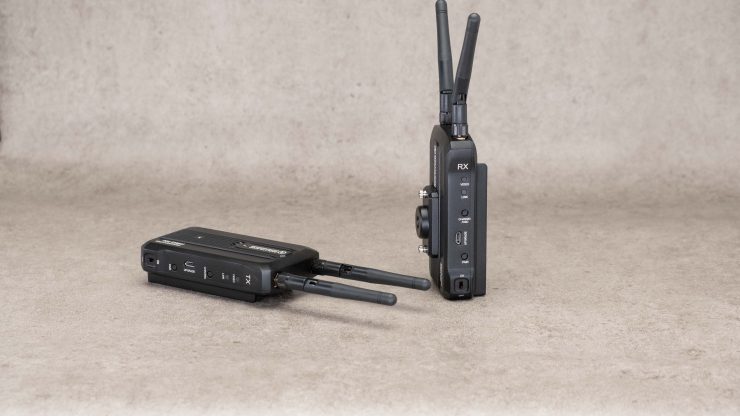 We are seeing a lot of wireless systems hit the market recently and now more affordable models are also coming out. The Hollyland MARS 300 is one of them. The kit retails for $499 USD making it a good option as far as affordability goes.

The Mars 300 is for indie filmmakers and lower budget productions. The reason I state this is because it does have some latency around 100 milliseconds and in a professional environment that will be an issue especially when recording dialogue. The more expensive models that Hollyland has offers much better latency performance from very low to practically none. Latency is an issue with a lot of DSLR or hybrid camera HDMI output. I’ve noticed this in many cameras when using an external monitor so when adding a wireless system on top of that it can be a little problematic.

To get the kit up and running a couple of Sony L NPF type batteries are required. I recommend the Hawk-Woods DV-F590 3400mAh versions as they are around twice the capacity with the same form factor giving you longer run times and a slim fit. With a 6600mAh battery, you get approximately 4-hours of runtime. The kit comes with one AC adapter with a locking connector.

Both transmitter and receiver are equipped with dual HDMI ports. On the transmitter, one HDMI-IN port for video and audio out and another for HDMI-loop out for an extra monitor. I did notice that the loop out does have added latency. On the receiver, both HDMI ports can output audio and video

The Mars 300 is rated for 300 feet line of sight use. I found that to be accurate however, this depends a lot on how congested the RF is in the location you are using it in. The status light on the receiver will blink when the signal is getting low but it does seem to continue to work so consider this more of a warning to not go farther away from the transmitter.

For mounting the Mars 300 has 1/4″-20 taps on the bottom of both transmitter and receiver. Also included is one 1/4″-20 adapter that screws into the front of the body. Unfortunately, the kit only comes with one making it a decision you will have to make whether to use it on the transmitter or receiver. I think they need to have two included as 1/4″-20 is the most used tap for mounting and having one on the front is a nice option to have. Also included is a cold shoe adapter with 1/4″-20 for mounting into the included mount. You will have to get creative to find the best solution for mounting.

The cold shoe adapter can be mounted to either the bottom or into the one included 1/4″-20 mount.

Since I didn’t have a cage for the SmallHD 702 I attached a NATO rail to the receiver and used a small Zacuto NATO clamp to attach it to the monitor. The receiver is so light it was very easy to hold or mount on a stand.

To mount it on the Z Cam E2, I used the SmallRig cage and a SmallRig Magic Arm screwed into the 1/4″-20 on the bottom.

If you are experiencing interference you can change the channel by simply pressing the channel button to find a clear signal. the Mars 300 software can also be updated with the USB input on the side.

The receiver has an OSD (On screen display) function that shows the status of the system on the monitor. This is handy and nice to see what’s going on as it is connecting to the camera and the channel selected.

The Mars 300 is very simple to use. I simply hooked it up and turned it on and the transmitter and receiver paired up. I never had to fuss with it even after powering down or changing the batteries it paired up automatically.

I did test the Mars 300 at a local broadcast station where I work that has a lot of wireless activity going. I had the camera in my edit bay and I walked out and across the floor without any dropout or warnings of signal status, so in the right conditions it just might work fine without a line of sight. Don’t expect it but you might have good luck outside of the line of sight rating.

The image plays back smoothly with no stuttering or strange playback artifacts. Outside of the latency, it’s working very well. In fact, I used the system during a studio shoot where I was in our main news set and had the producer in a fixed position and I was roaming around shooting BTS during a live taping. She was thrilled to be able to see everything I was shooting and was giving me feedback on the shots. I don’t think I’ve seen her so happy before 😀

The Hollyland Mars 300 is an inexpensive wireless video system that works very well and punches above its weight. At only $499 USD it’s a nice piece of kit to have when cables are getting in the way. Not having to be connected to a monitor is incredibly liberating for the DP as well as the director, producer or anyone that needs to see what you’re shooting. Yes, the latency is a little distracting for dialogue or for pulling focus but at this price point, it’s not surprising. If you need to have super low 1ms latency expect to pay more than double compared to the Mars 300.

For me, I think the Hollyland Mars 300 will get a lot of use in those situations where I just want to have the monitor away from me while I shoot. Cables can be a pain to deal with especially if you’re moving the camera around getting different angles.

Hollyland has professional systems as well like the Cosmo 2000, that features SDI and 1ms of latency.

As for the competition, it’s thin in this price range. There is the Teradek Ace 500 which can receive 1080p60 and has a 500ft range with a claimed zero delay that is double the price at $999 USD.

Once you get to around $1,500 you have several options from Teradek, Vaxis, and Cinegears to name a few.